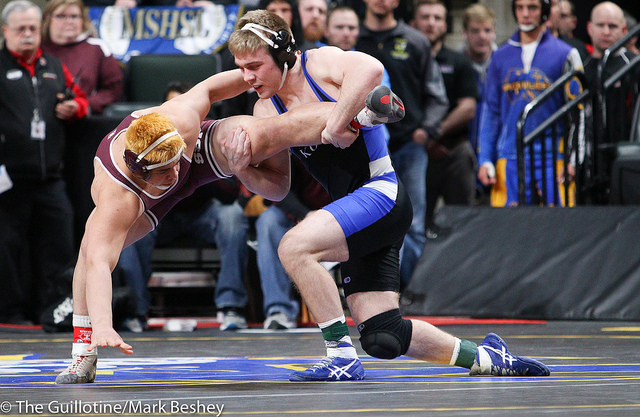 The Hawkeyes haven’t even begun to fill out their 2019 recruiting class, but have already struck gold in the class of 2020. Minnesota prep Patrick Kennedy has given his verbal commitment to wrestle for the Hawkeyes according to our own Tony Hager.

“I’m committing early to help build a team of recruits before I get down there. I wanted Morningstar and Brands to have a plan and firepower for potential recruits.” Kennedy told IAwrestle about his early commitment.

Kennedy is one of the top upperweight recruits in the country, checking in as the No. 2 ranked 182-pound high school wrestler according to national media outlet, The Open Mat. Making Kennedy’s ranking even more impressive is the fact that the Kasson-Mantorville prep is only a sophomore. A two-time state champion, Kennedy has already been making waves on the freestyle circuit as well, taking third at last summer’s UWW Cadet World Team Trials and third at USA Wrestling Cadet freestyle nationals.

Despite being ranked at 182 pounds, Kennedy still projects at 165/174 pounds to start his college career – at least that’s Kennedy’s feelings on the matter.

Some fans will recognize the Kasson-Mantorville school name and recall that is the same high school in Minnesota that produced the Hawkeyes current heavyweight Sam Stoll. The high school is also led by former Hawkeye Jamie Heidt, who was a Big Ten champion in 1999 and All-American for Iowa.

One thought on “Hawkeyes Land 2020 Talent Patrick Kennedy of Minnesota”