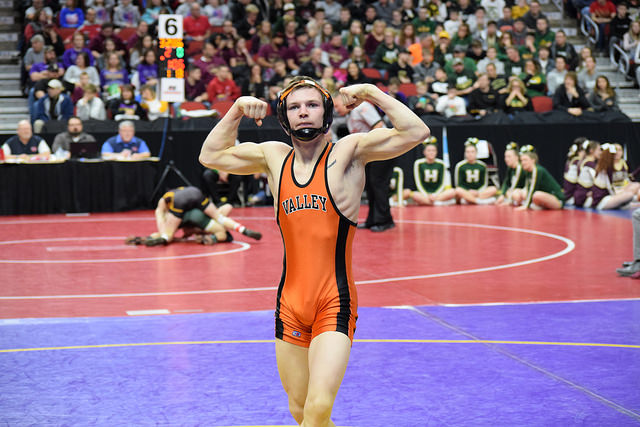 It’s good to be Nick Oldham right now. The West Des Moines-Valley prep recently picked up his first state title this past winter, and over the last ten months fans have witnessed Oldham start to make the transition into the elite category. Now he is a top 100 recruit and considered the top lightweight prospect available in the state of Iowa.

But before he was racing up recruiting “Big Boards” Oldham was dealing with the frustration that comes with taking a loss. To get to where he is today we have to go back in the story to 2017 when Oldham was a sophomore. Back to when the only bitter taste in Oldham’s mouth was coming up short in the state finals as a freshman.

Nick Oldham felt broken. After a strong start to his high school career that included a second place finish as a freshman, Oldham went into Wells Fargo Arena the #2 ranked wrestler at 106 pounds as a sophomore. He knew he was in for a battle, drawing the weight’s #1 ranked wrestler, Mason City’s Cullan Schriever, in his quarterfinal, but when you are the caliber of Oldham who your opponent is doesn’t factor into your goals. It was there in the quarters that Oldham took a loss 7-3 to Schriever, but later he took another, more surprising loss in the consolation semifinals and wound up taking fifth overall.

“To be totally honest, after state sophomore year I broke.” Oldham told IAwrestle, “I didn’t want to train. I didn’t want to do anything except sit in my room and play video games. I did no physical activities for probably a month and a half after the season was over.”

And then TJ Sebolt happened.

The Sebolt Wrestling Academy (SWA) is without a doubt one of, if not the, best wrestling club in the state of Iowa. It is run by the aforementioned TJ Sebolt, who was a four-time Iowa high school state champion for Centerville back in the 2000’s. With practices in Mason City and Ames, the reach of Sebolt’s club has grown significantly over the last couple years.

One of the things that the SWA is famous for is their summer camp known as the “Man of Steel” camp, which describes itself as, “This is a camp is for the wrestlers with the Highest Goals – State, National, World, and even Olympic Champion Goals, this is a camp for goal oriented wrestlers.”

At the urging of one of his parents, Oldham decided to attend the Man of Steel camp last summer and it was there he quickly learned if he was going to make it though the end of the camp he was going to need to fully commit to the training regimen.

“One morning my mother came into my room and asked if I would want to go to Man of Steel wrestling camp. Of course I was a little hesitant but after a little convincing I finally agreed to it. I was told it was going to be tough so I would go for a run every morning thinking it would be enough. I get to camp and at the first practice I completely broke mentally and physically.”

In case you were wondering Oldham’s shape didn’t go without notice by Sebolt when the wrestler got to his room. It was clear that changes were needed if Oldham was going to get to the level he wanted to be at to achieve his goals.

“When he first started my practices he could hardly make it out of warm ups.” Sebolt recalled back to when Oldham first got to his room, “He learned real fast that we do things the hard way and the right way. I think the camp was an eye opening experience for him. He had to pretty much limp through it. After that I think he realized that if he wanted to win a state tile this is the kind of work he had to put in and this was the system he needed.”

After adjusting to the rigors of Sebolt’s camp, Oldham was able to reflect back on his sophomore season that was and decided right then and there he wasn’t going to let his goal slip away again.

“During camp I realized that I was not happy with placing fifth. I wanted to win. I trained 101% everyday, every practice, every lift.”

The offseason work put in by Oldham immediately paid off and was visibly apparent during his preseason run. Another thing the SWA is known for is the competition schedule. The club actively trains year round and is encouraged to compete in both summer and preseason events. Its the old wrestling adage that winter champions are made in the summer-type mentality. Two of the more regularly attended tournaments by the SWA are the Conflict at Carver in Iowa City and, for his more elite wrestlers, the Super 32 in North Carolina.

“The month of September he made huge leaps in his conditioning and mental toughness.” Sebolt said, “By the time the Conflict at Carver rolled around he was already new and improved Nick Oldham and I think everybody noticed.”

The first of the two tournaments was the Conflict, which saw Oldham come out on top of a bracket with two wrestlers ranked nationally at 113 pounds – with Oldham downing Matthew Ramos of Illinois as his marquee victory. The performance was strong enough to get the Valley wrestler named Outstanding Wrestler of the high school division.

“TJ came up to me one day before practice and straight up told me I was going to Conflict at Carver and then to Super 32.” Oldham said, “I of course said yes and started working on my weight. I then went to win OW at Conflict at Carver.

“Winning OW and beating Ramos was probably the best confidence booster I’ve ever had. It made me realize that I am 100% capable of winning a state title or even earning All-American honors at Fargo.”

He followed that performance by heading to Super 32 where he fell one match shy of earning a medal. Known as the toughest preseason tournament in the country, the Super 32 attracts some of the top wrestlers in the country. Oldham’s final loss in that tournament was to a three-time state champion from the state of Washington, dropping his match in triple overtime.

With a strong preseason under his belt, Oldham entered into his junior season with a lot more confidence than when left the mat the previous season. He began the season the seventh ranked wrestler at 120 pounds but after managing his weight down he jumped to the second ranked wrestler at 113 pounds by the time IAwrestle released its second set of rankings in December.

From there on Oldham was stuck in the #2 slot for the remainder of the season. The wrestler ahead of him was the talented Ankeny freshman Caleb Rathjen who’s only loss during the season came to an out of state opponent in November. It appeared that if Oldham wanted to be considered the top wrestler in the state the path was going to lead through Rathjen.

Oldham finally got his opportunity when both reached the 3A finals after they combined for five bonus wins (and one decision) to set up the #1 vs #2 showdown. For Oldham it was an opportunity to both take over as the top wrestler, and to finally achieve some redemption from his previous two trips to the state tournament.

“(Rathjen) being ranked #1 did motivate me a little but the real motivation came from my mother who pushed me to my limits every morning in the gym and all of my coaches pushing me in the wrestling room. Going into the (finals) I was a little nervous, but I knew that I would come on top just because of all the training I have been doing.”

Oldham began the first period against Rathjen strong, jumping out to a 4-0 lead over the freshman. From there Rathjen was able to storm back in the match, leading 6-5 heading into the final period. With his end goal in sight Oldham was able to dig deep to finish with a 10-8 victory.

“Winning my first state title had been a goal I’ve been working towards for the past six-seven years. No single emotion can describe what it felt like to win. It will probably be the best feeling ever until I succeed in the next level.”

With his redemption now achieved at the state tournament Oldham can now turn his attention to his bigger goals, like winning Fargo or making a World Team for the United States. Going back to the beginning of Oldham’s junior year he has entered and continues to climb the recruiting board for the class of 2019. The Open Mat rates Oldham as his grade’s #56 overall wrestler at this time.

This summer Oldham will attempt to qualify for USA Wrestling freestyle nationals held in Fargo, North Dakota in July. Next month the Valley wrestler will head to Akron, Ohio and attempt to make the USA’s Cadet (U17) World Team.

In the back of Oldham’s mind is the future beyond high school. He has already begun the recruiting process and is in conversations with several Division I schools. As of now Oldham doesn’t have any plans to make his decision in the near future as he weighs his potential suitors’ academic and athletic attributes. As for his size Oldham believes he could be a career 125-pound option.

According to Sebolt, who himself was recruited to a Division I program, Oldham has all the tools he needs to succeed at the next level, he just needs to stay hungry.

“In order for Oldham to have success he has to always be moving forward. He has to stay on course, have a goal, be hungry, and climb the next mountain. When he puts his mind to something he can achieve anything he wants to. He’s a Division I talent for sure.”