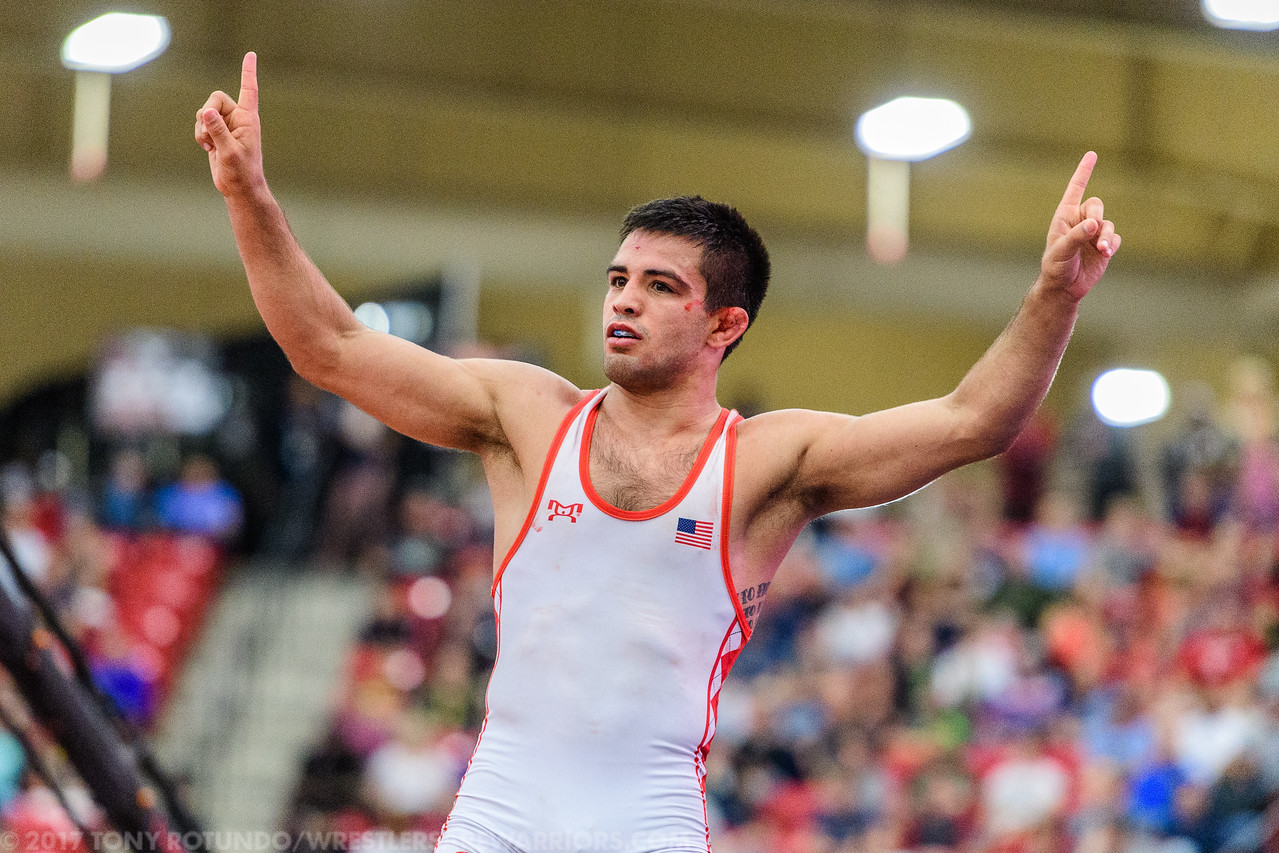 As we head into the final day of USA Wrestling’s Senior Men’s freestyle U.S. Open a total of ten wrestlers with Iowa ties have secured a berth to the World Team Trials held next month in Rochester, Minnesota while three more wrestlers will look to do the same with one more win. The top seven wrestlers at each weight advance to the Trials.

Leading us off at 57 kg is two-time U.S. Open champion Tony Ramos who is looking to defend his title against newcomer Daton Fix. So far we have seen vintage Ramos, scoring two lopsided victories and his only close win was in hand thanks to his stellar defense.

The meeting with Fix was potentially one of the biggest potential matches discussed leading up to the tournament. Still eligible to compete on the USA Junior team, Fix made the jump into Seniors to test the waters and so far has looked anything but a rookie in this division. He will likely have a tough time fighting through Ramos’s hands, but if he manages to get on top he has the ability to end a match quickly.

Moving up to 61 kg former Northern Iowa standout has the chance to put himself in a strong position to make his first World Team with one more win this weekend. Most weights being contested this weekend have a returning World medalist, which means the U.S. Open champion will advance to the best-of-three finals at the Trials. If they win there they advance to the final step of making the World Team – Final X – in another best of three series against the reigning World medalist. Fortunately for Colon, 61 kg does not return a medalist, which means he could advance straight to Final X. In theory Colon is just three wins from making the World Team.

To do so he will need to go through Nahshon Garrett, who has moved into this weight following the change in weigh-in procedures. Colon already avenged a loss from last year, defeating Brandon Wright in the semifinals, which may indicate that Colon is ready to take the next step.

Speaking of Wright the former Grand View star will finish top six at 61 kg and is officially qualified for the Trials. He will likely see Tyler Graff in his consolation semifinal. At this point Wright’s goal is to improve his seed for the Trials to create a more favorable draw at the next tournament. A win over Graff would be checkmark in that box.

The lone wrestler at 65 kg qualified for the Trials is the Hawkeye Wrestling Club’s Nick Dardanes, who was bumped in the semifinals last night by Missouri All-American Jaydin Eierman. Similar to Wright, Dardanes can only hope to improve his Trials seed and he does have a rather favorable match in the consolation semifinals as he will take on the winner of Robbie Mathers and Jayson Ness.

In his return to competition former Iowa All-American Mike Evans has looked pretty good at 79 kg reaching the semifinals yesterday. It was there he fell victim to Alex Dieringer, who despite being a medal threat on the World level, he will likely be the second best guy at this weight behind Kyle Dake. This weekend was a strong start to Evans’s freestyle career and he is in a strong position to make the national team (top three wrestlers at a given weight).

Former Iowa State All-American Pat Downey had a rough go of things yesterday in his return to the mat. After opening a lot of eyes at the 2017 Open, many were hoping for Downey to put on a show in Vegas, but those dreams were dashed early when Dominic Ducharme defeated Downey 18-10 in round two. Downey has still wrestled back to the point of being qualified for next month’s Trials, but unless he finishes strong he will likely have a tough draw in his next tournament.

Two wrestlers will be advancing at the new 92 kg weight class in former Northwestern College wrestler Enock Francois and former Iowa State resident athlete Deron Winn each making the semifinals, and now both are on a collision course to meet in the third place bout.

It was a bit of a shock at 97 kg when Kyven Gadson was knocked off in the semifinals in the closing moments, which will end his bid to repeat as Open champion. The U.S.’s runner-up at last year’s Trials, Gadson will now attempt to wrestle back for third against a field loaded with wrestlers with Iowa ties.

Also dropping a semifinals bout was the Hawkeye Wrestling Club’s Nathan Burak, who was third at this tournament last year and is qualified for the Trials.

Two additional wrestlers from Iowa will attempt to secure their Trials spots in former UNI wrestler Blaize Cabell and former Iowa prep Ross Larson. Cabell will take on Braden Atwood, and with a win advances to face Gadson, while Larson will take on Ben Honis and would take on Burak with a win. A loss for either wrestler would send them to the seventh place match, which as mentioned they would need to win to advance.

Finally, we reach the triumphant return of Olympic champion Jake Varner, who took all of 2017 off to move up to 125 kg. He will take on Adam Coon, who was the runner-up in the Greco-Roman tournament yesterday.