Allard vs Oldham + Broderson vs Buesgens 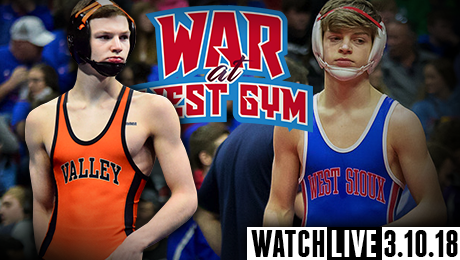 Two more War at West Gym matches have been set with a pair of 113-pound state champions scheduled to meet along with a upper-weight matchup sure to deliver action.

The first matchup features two promising lightweights with Valley-West Des Moines’ Nick Oldham squaring off against West Sioux’s Adam Allard. Ranked #13 in the country, Oldham is coming off his strongest season to date. He kicked off his junior season with a medal winning performance at the Super 32 in North Carolina and ended his regular season by winning his first state title, and third medal overall. On the other side is sophomore Adam Allard, who picked up his second straight state title at 113 pounds.

For the upperweights the event has added rising junior Julien Broderson, who will make his return to the event against another nationally ranked opponent. Broderson burst onto the national radar after winning a state title as a sophomore followed by him earning Greco All-American honors at USA Wrestling Cadet nationals this past summer. Broderson repeated as state champion as a junior and will be a heavily pursued prospect heading into his senior year.

His opponent is the #17 ranked Tyler Buesgens from Scott West high school in Minnesota. Committed to wrestle for Iowa State University,  Buesgens will put his national ranking on the line in a gym he will soon deem as enemy territory.

5 thoughts on “Allard vs Oldham + Broderson vs Buesgens”