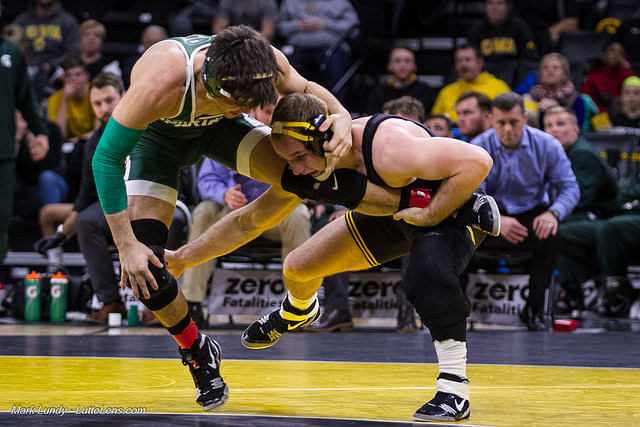 The Iowa Hawkeyes dropped their second dual meeting on the season as #1 ranked Penn State claimed a 28-13 victory over the Hawkeyes in State College, Pennsylvania. Iowa had their chances in the dual, leading after six matches thanks to bonus wins from Spencer Lee and Michael Kemerer and a huge upset from Alex Marinelli, but Penn State’s upperweights proved to be the difference in the dual as the Lions won the last four bouts to claim the dual.

A Pennsylvania native, much was made about this dual being the homecoming dual for true freshman Lee, who famously picked the Hawkeyes over Penn State in his recruiting process. Lee wasted little time in his matchup with Carson Kuhn picking up an early takedown and followed with pin in the first period to put the Hawkeyes out front in the dual 6-0.

It was all Corey Keener early in the 133 pound match as his two takedowns in the first period was all he needed to upend Hawkeye sophomore Paul Glynn, 5-2 in the night’s second bout.

Getting the call at 141 pounds was Hawkeye sophomore Vince Turk against the #8 ranked Nick Lee. The Hawkeye managed to score the opening takedown, but it was all Lee in this matchup after that. Two first period takedowns, followed by one in the second built a 7-5 lead for Lee that he never looked back on. Final score at 141 was 11-8 in favor of the Nittany Lion.

Once again Penn State’s #1 ranked Zain Retherford was able to get the better of Brandon Sorensen winning by decision 6-2. Retherford managed a first period takedown with just over a minute left to secure the first score. Sorensen was able to get out from underneath with under ten second remaining in the first, but a second period rideout from Retherford and third period takedown put the match out of reach for the Hawkeye.

With Penn State’s #1 ranked Jason Nolf not in the lineup due to injury the Hawkeyes were able to capitalize on scoring points at 157 pounds as the #2 ranked Kemerer cruised to a 14-4 major decision over Nolf’s backup Bo Pipher. Kemerer was able to control the match from start to finish to give his team a 10-9 lead at the midway point.

The dual featured four top ten matchups, but none was more anticipated than the 165-pound match between #1 Vincenzo Joseph and the undefeated Hawkeye freshman Marinelli. The wrestler affectionately referred to Bull needed some late match heroics, but he was able to deliver with a body lock to Joseph’s back for a six point move to power his upset over the defending NCAA champion, 9-6.

Penn State then saw both of their top ranked wrestlers at 174 pounds and 184 pounds notch first period falls by locking up cradles. Mark Hall decked #18 Joey Gunther at the 1:00 mark and Bo Nickal pinned Mitch Bowman in :50.

The Nittany Lions scored a pair of surprise wins to end the daul starting at 197 pounds as Cael decided to go with Shakur Rasheed instead of #2 ranked Anthony Cassar. The decision made little difference as the PSU wrestler controlled the entire match, racking up a major decision and a 11-2 final score over the Hawkeye. Heavyweight Nick Nevills used a third period takedown as the difference to upset 3 Sam Stoll, 3-2.