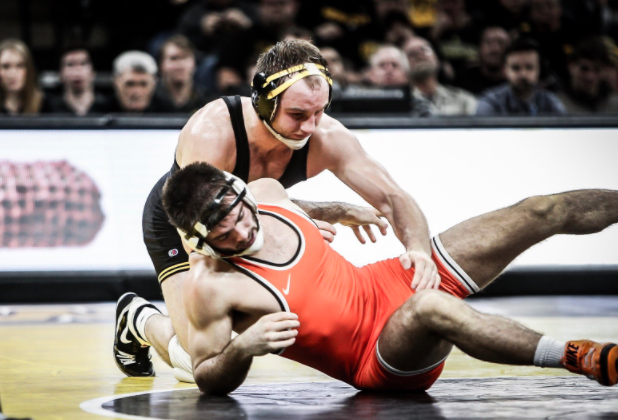 There were upsets a plenty during today’s meeting between the #5 ranked Iowa Hawkeyes and the #6 ranked Oklahoma State Cowboys. The Cowboys led the Hawks just one time during the dual, after a major decision win at 133 pounds. Iowa rode their three upsets to a 20-12 victory to win for the fourth time in the teams’ last five meetings.

In the dual’s first marquee matchup, Spencer Lee looked like he was heading for bonus in his match against #6 Nick Piccinnini, jumping out to a quick 6-0 lead in the first period. As the match progressed Piccinnini was able to mount a small comeback to close it to a 10-5 final score in favor of the Hawkeye freshman.

Moving to 133 pounds Brands opted to go with his older wrestler using senior Phil Laux to face the #4 ranked Kaid Brock. The Okie State wrestler tried to widen the gap and pick up the extra bonus point, but Laux was able to get in on a shot attempt and nearly scored at the end of the match, but wound up on the losing end, 16-6.

Sophomore Vince Turk managed to keep it close with the two-time NCAA champion Dean Heil losing the final score 4-0. Heil managed to score quickly off the whistle in the first period to jump out to a 2-0 lead and his other points came via a second period escape and riding time.

In the meet’s second ranked head-to-head meeting senior Brandon Sorensen jumped out to a strong 6-1 lead in the first period. On the opening takedown Sorensen managed to pancake #13 Boo Lewallen to his back for two near fall. From there the Hawkeye  was able to pour on several more takedowns and added two key bonus points to secure a technical fall for his team.

Many expected sophomore Michael Kemerer to be a bonus point scorer with his mismatch in rankings, but he came up one point shy, 9-2 against Jonce Blaylock, though the match ended up being a four point swing for the Hawks. During the second period the Oklahoma State bench violated the mat area for the second time in the dua., costing them a team point.

Iowa led 11-6 in the team score at the midway point, with several big matchups remaining.

Contining his undefeated season was freshman Alex Marinelli who upset the #7 ranked Chandler Rogers, 5-2. After a scoreless first period with several unsuccessful attempts by both wrestlers, Marinelli was able to score both of his takedowns off counters on leg attacks from Rogers.

Striking back at 174 was Oklahoma State’s #12 Jacobe Smith as his third period takedown against Joey Gunther proved to be the only difference. The win put Oklahoma State back in the dual trailing 14-9 with three matches to go.

Iowa piked up their third upset at 184 pounds, this one coming off the strength of Mitch Bowman’s strong first period vs the #19 ranked Keegan Moore. After an edge call was originally called “action” Tom Brands threw his challenge brick and the call was reversed to takedown. Bowman scored two more takedowns in the match with the final being a 10-6 decision.

That would be the end of Hawkeye upsets, as Oklahoma State’s #3 Preson Weigel was able to come out on top of #5 Cash Wilcke with a 6-0 decision at 197 pounds.

Heavyweight Sam Stoll was business as usual in the dual finale, winning a tight 6-4 SV2 battle against #11 Derek White.