RAPID RECAP: Cyclones Pick Up Win No. 2 Against Virginia 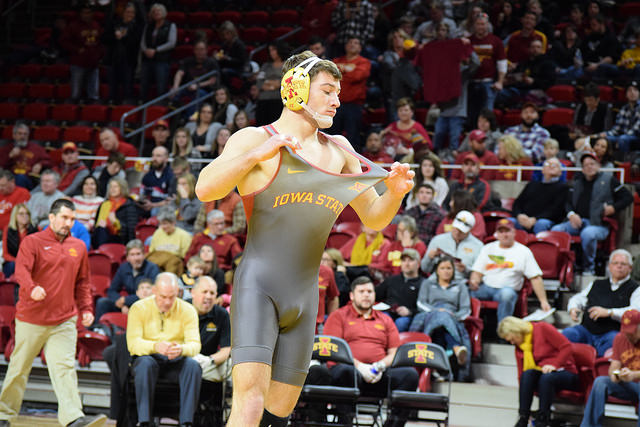 The Iowa State Cyclones earned their second straight dual win of the season down at the Virginia Duals where the managed to come out on top of a back-and-forth affair with the Cavaliers, 21-18. The win was also head coach Kevin Dresser’s first road dual victory as head coach of the Cyclones.

The dual started off with a pair of wins from Virginia as their ranked duo of Louie Hayes and Jack Mueller combined for eight points as Sinjin Briggs lost by technical fall and Markus Simmons went down in a narrow decision to the returning All-American respectively.

From their the Cyclones made a strong comeback, picking up a decision at 141 pounds from Kanen Storr, followed by back-to-back bonus point wins. At 149 pounds freshman Jarrett Degen keeps his bonus win streak alive when he pinned Jake Keating in the first minute of their match. The win gave Degen his third straight bonus win. At 157 pounds sophomore Chase Straw used a big first period lead to put away Fred Green by technical fall. The dual score moved to 14-8 at the midway point.

Virginia responded with a bonus point win of their own at 165 pounds with Andrew Atkinson winning by major decision over Skyler St. John. The Cavaliers made it two straight with a Will Schany decision over Danny Bush at 174 and retook the team lead 15-14 with three matches to go.

Dane Pestano pushed things back to Iowa State’s favor at 184 pounds with a major decision over Michael Battista. At 197 pounds Dresser decided to go with sophomore Joe Teague instead of freshman Sammy Colbray, but Jay Aiello downed the Cyclone 10-7 putting the dual solely in the hands of the heavyweight bout.

With the dual on the line junior Marcus Harrington wrestled a tough match against Tyler Love where his takedown in the third period managed to be the difference. He won 3-2 and sealed the team victory.

Iowa State will face #10 Arizona State next in the James River pool, at 12:00 PM Central. Additional preview information on that dual available here.

One thought on “RAPID RECAP: Cyclones Pick Up Win No. 2 Against Virginia”