Iowa Looking to Close out Road Trip Against Maryland 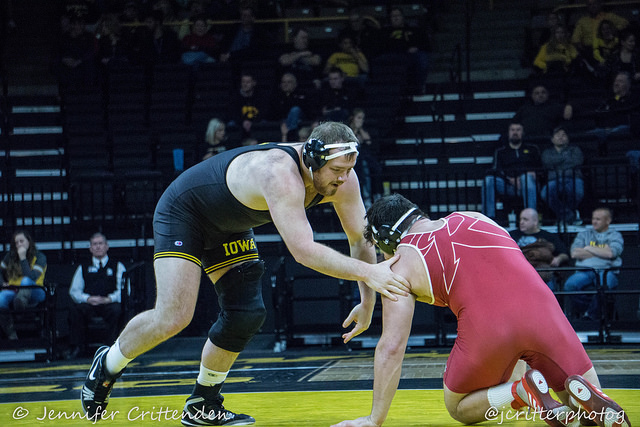 The Iowa Hawkeyes moved to 6-0, 2-0 in Big Ten competition, on Friday after their 23-15 victory over Rutgers. Head coach Tom Brands continues to search for an answer at his first three weights as sophomore Paul Glynn and freshman Carter Happel each received starts in Friday’s dual at 133 and 141 pounds respectively. Additionally, freshman Alex Marinelli was able to make his season debut at 165 pounds against U23 World champion Richie Lewis.

Heading into tomorrow’s matchup there will be just one ranked head-to-head meeting, and that will occur at 285 pounds. Coming in with five falls in six matches, #7 Sam Stoll will take on #12 Youssif Hermida in the feature bout.

Sophomore Michael Kemerer will look to continue his hot start coming off a technical fall victory against Rutgers. Fellow All-American Brandon Sorensen will also be favored taking on Adam Whitesell at 149 pounds. Rounding out the Hawk favorites is senior Phil Laux at 133 pounds and sophomore Cash Wilcke at 197 pounds.

Finally, Iowa will also be the favorite at 165 pounds regardless of which starter Tom Brands opts to go with. Marinelli made his debut in solid fashion coming out with a barrage of leg attacks against Lewis. Brands also brought fellow freshman Young on the road trip, who has proved to be more than capable during his time filling in for the Bull.

The Maryland lineup does feature one other ranked wrestler aside from Hermida as Ryan Diehl will come into this dual ranked #11. After a 3-0 start to the year sophomore Vince Turk has since dropped two straight dual matches for the Hawkeyes. Despite Happel’s 3-2 loss to Rutgers’s Mike Van Brill we will see if Brands will give his freshman another start on this road trip as he looks for someone to establish themselves at 141.

As a team Maryland has struggled out of the gate going 3-3 in duals losing all three conference matchups. If you are into computer projections, Wrestle Stat has this dual 25-9, Hawkeyes.