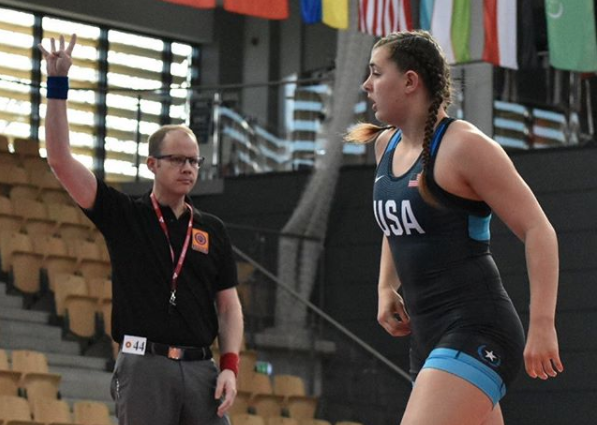 BYDGOSZCZ, Poland – The U.S. women’s freestyle team wrapped up its first day of competition at the U23 World Championships in Bydgoszcz, Poland.

The USA was unable to qualify any wrestlers for the medal rounds but did pick up a win at 75 kg/165 lbs. and advanced one wrestler to repechage at 55 kg/121 lbs.

The only American win on the day came from four-time age-group World Team member Rachel Watters (Ankeny, Iowa/Aries WC), who defeated Aysegul Ozbege of Turkey with a dominant 10-0 technical fall to open her second World Championships of the year.

Capote Perez jumped out to a quick 6-0 lead halfway through the first period, thanks to a takedown, crotch lift and two penalty points. In the final seconds of the period, the Cuban was awarded four points on the edge. USA challenged but the call stood, giving Capote Perez one point and an 11-0 tech fall.

Watters tournament came to an end when Capote Perez failed to make it to the finals, running into 2016 Cadet World champion and 2017 Junior World silver medalist Yashua Matsuyuki of Japan in the semis.

“It’s been a good year of experiences,” Watters said. “Yeah, I didn’t win a medal this year, which is disappointing, but I’ve been learning every single day and becoming a better wrestler. Hopefully one day I will come away with that World medal.”

Okuno went on to advance to the 55 kg finals, pulling Parrish back into the repechage, where she took on 2017 Junior European champion and Alexander Medved Prize silver medalist Alina Akobiia of Ukraine.

Parrish ran out to a 4-1 lead early in the first period with a pair of takedowns, but Akobiia took over the lead with a 5-4 advantage at the break. In the second period, Akobiia won a scramble, putting Parrish to her and picking up the fall at 4:09.

Nelson was first on the board with a passivity point, but Smoliak tallied takedowns in the closing seconds of each period to knock off the World champ, 4-1.

“It was definitely a hard match and a tough tournament,” Nelson said. “The preparation was hard, and it just didn’t go in my favor today. It’s extremely humbling. Wrestling is a humbling sport.”

The Russian made her way to the semifinals, where she lost a 4-3 heart breaker to 2016 Junior World champion Ayana Gempei of Japan, which ended Nelson’s run at another World medal.

“To say that I’m not disappointed would be a lie. I just have to get back to work and get even more focused,” Nelson said.

The two went back and forth in the first period, but it was a four-point roll through from Dragunova that gave her a lead that Black could not overcome. Dragunova walked away with a 16-7 win.

The Belarusian lost her quarterfinal match to Xiaosian Wang of China, knocking Black out of the tournament.

Fans can find live streams and brackets on Trackwrestling.com.

2017 U23 WORLD CHAMPIONSHIPS
at Bydgoszcz, Poland (Six hours ahead of ET)