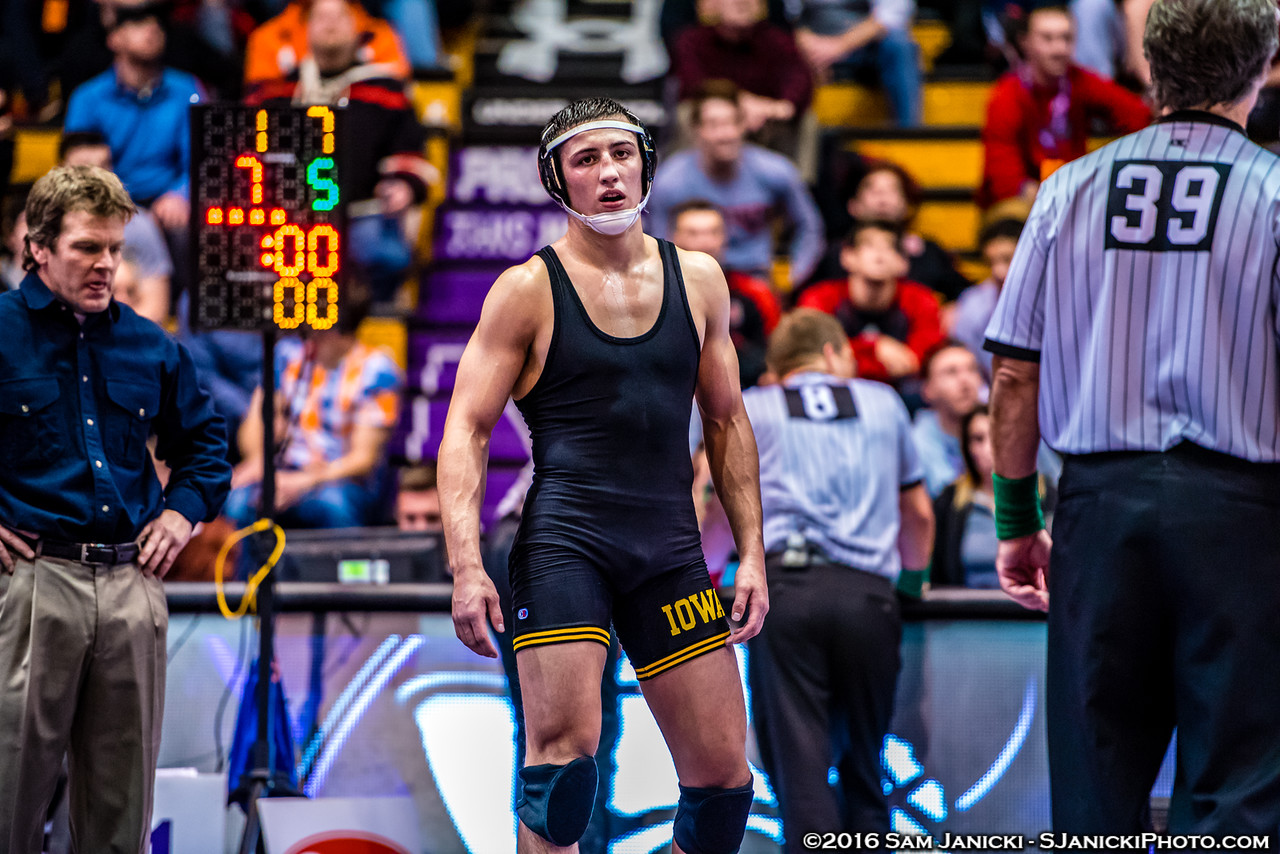 1st: Bianchi strikes first for a takedown. Stickley gets to his feet, Bianchi locks up a cradle from neutral and puts Stickley on his back. Bianchi gets the fall.

1st: Laux with a takedown in to a trap arm turn for 4NF. Laux working chicken wing half. Doing a great job flattening him out. More nearfall points to push it to 12-0. 2:38 of riding time.

2nd: Laux with escape and takedown for the tech.

2nd: Turk with takedown and nearfall points. Goes back to that blast double we saw last dual. 13-2 after release. 2 TD’s and 2 releases and its 17-4. A few shots and reshots but no scoring. Turk in on a double, Hampton tries to flip him through but Turk ends up on top for the deuce and the tech 19-4

1st: Ankle pick for Sorensen, rides him for 21 seconds and Gilva gets the escape. Another ankle pick for the Soarin Eagle and Sorensen leads 4-1. Sorensen up over 1:00 of RT then Gilva gets up for the escape. Sorensen working a lot from from his knees trying to be heavy on Gilva’s head. Period ends 4-2 Sorensen

2nd: Gilva will go down to start the second. Sorensen comes out front to try and get Gilva’s arm up on his back but he loses it. Sorensen still riding tough. Sorensen rides out Gilva in the second.

3rd: Sorensen chooses down to start the 2nd and is up and out in a stand up immediately. Gilva gets in clean on a single leg and almost gets the TD but Sorensen scrambles out to a front headlock and we get a stalemate. Sorensen in on a double leg, he peaks his head out between and turns for the TD. Gilva up for the escape. 8-3 Sorensen with 15 seconds left. Sorensen gets another TD and he will get the major after RT

1st: Here we go with what is probably the marquee matchup of the day. Kemerer in on a single leg, gets the TD and ends up with the inside cradle locked up, he gets his 4 NF and still has the cradle tight. Trying to readjust for the fall, almost has it but Ream wiggles out. 6-0 lead for Kemdawg. Kemerer gets a trap arm tilt and is now up 10-0. Kemerer comes out front trying to work a cross face but Ream circles up to his feet for the escape. Kemerer right back in for the TD and the period ends 12-1.

2nd: Ream chooses neutral and Kemerer gets right in on the double for the TD 14-1 now. Ream gets another escape, we are neutral and the score is 14-2 Kemerer, Kem in on a reshot for the TD 16-2. So much for the marquee match of the day, this one has been a real Reaming.

3rd: Kem starts the 3rd period down and gets out in 12 seconds. 18-2 tech fall for Kemerer

1st: Fogarty in on a leg, but Young reaching back for Fogartys leg in a splade situation. A little scramble ensues and Young ends up on top for the TD. Fogarty out in 13 seconds. 2-1 Young. Not much action for the next minute. Half shot by Fogarty and Young tries to work the front headlock but Fogarty able to back out and we end the period in neutral 2-1 Kaleb Young leads.

2nd: Young chooses down. He goes to a sitout and changes over for the escape. 3-1 is the lead for Young. Not much action other than hand fighting and we will go to the 3rd, Young still leading 3-1.

3rd: Fogarty chooses down and gets the escape. 3-2 Young still leads. Young got to Fogarty’s legs but he got stretched out a little bit. Fogarty trying to break the lock now but Young holds on strong for a stalemate. 20 seconds left. Fogarty tries a shot, Young stops him for a stalemate. 10 seconds. Time runs out.

1st: Handfighting and underhooks through the first minutes. Gunther tries a throw by single but couldnt get to the leg. No scoring 2 minutes in. Gunther works around behind for the TD with 20 seconds left. Gunther rides out Urbach for a 2-0 lead through 1 period.

2nd: Gunther chooses down to start the 2nd. Gunther to his feet, gets mat returned, comes to his feet again and gets away this time. Now Gunther leads 3-0. Sweep single for Gunther, gets the other leg and covers for the TD. Young leads 5-0 now. Period ends same score.

3rd: Urbach chooses down. Gunther has 1:08 RT to start period. Urbach gets out in 9 seconds. Gunther gets to a leg, circles around for the other and he has another TD. Gunther leads 7-1 with 1:00 left. Gunther says he wants to go neutral on the next restart. 7-2 now. Stall warning on Urbach, Gunther gets another TD to pick up the major with RT

1st: McNutt tries a firemans carry and almost gets it, he sent Bowman into kind of a cart wheel but Bowman fights it off. Now Bowman in on a single but they are close to OB, they go OB. Still 0-0. Being told Tyler McNutt is no relation to Marvin McNutt. Bowman in on a single, circles around and covers the other leg for the TD. McNutt gets out 2-1 is the score as the 1st ends.

2nd: Bowman chooses down to start the 2nd. Bowman up and out right away for the escape. McNutt in on a single, now switches to a double and now has Bowman elevated, hes trying to come out the back door. McNutt gets the TD and has a bottom leg turk. Bowman does a good job working forward. Bowman now in a tripod, to his feet but they go OB. McNutt does pick up a stall call. 7 seconds left on the restart but McNutt with the ride out.

3rd: McNutt goes down to start the 3rd, hes out immediately and almost gets in on Bowman again but we have a stalemate. 4-3 McNutt leads with 1:00 to go. Bowman in on a shot, he elevates and trips for the TD. Bowman riding tough with a boot in now. Bowman had McNutt flat on his stomach but we had a stalemate. McNutt almost comes around behind for a reveral but Bowman able to hang on to the leg, gives up a stall call but picks up the win 5-4

1st: Two Iowa boys going at it here, you have the pride of OA-BCIG and North Scott going at it. Wilcke gets to leg and gets the quick TD but Eaton is out immediately. Eaton almost gathers the leg but Wilcke sprawls out. Wilcke gets the double leg for the TD. 4-1 Wilcke leads. Eaton gets the escape.

2nd: Eaton chooses down to start the 2nd. Wilcke has 16 seconds of RT. Eaton to a tripod, to his feet and gets the escape. 4-3 Wilcke leads. Shot by Eaton, reshot by Wilcke but neither guy can get to a leg. Period ends 4-3 Wilcke

3rd: Wilcke goes down to start the 3rd and is up and out immediately. 5-3 Wilcke leads. Cash was in deep on a double but Eaton does a great job scrambling for a stalemate. Wilcke gives up the a stall call but time will run out.

1st: Throw by for Stoll to rear standing, he lifts Stirbal and returns him to the mat for the TD. Looks like the Hawkeyes unblemished record in the Iowa City Duals will stand for at least one more year. Stribal up to his feet and Stoll is hit for stalling, they go OB no change. 45 seconds left on a restart. Stoll has 1:45 of RT already. Stribal gets out with 15 seconds left. Stoll pushes Stribal OB and Stribal hit for stalling.

2nd: Stoll chooses down to start the 2nd. Stoll out in 15 seconds. Lots of handfighting and pummeling. Stoll gets to a body lock but cant get a score.

3rd: Stribal will go down to start the 3rd. Stribal gets up to his feet but the go OB. Stribal up again but Stoll mat returns him. 1:00 left in the match. Stoll out front working Stribals arm up on his back, he flips Stribal over to his back and gets the fall.