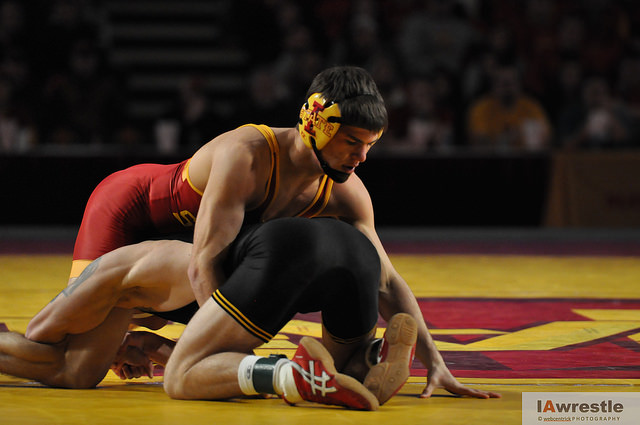 After two weeks of competition we are beginning to form a picture that will be Kevin Dresser’s first Iowa State lineup. The team opened their season at home with the Harold Nichols Cyclone Open, with titles coming at 133, 149, and 157 pounds. This past weekend the Cyclones kicked off their dual schedule, falling to Drexel 21-16 on their home mat.

What should also be taken into account through the first couple weeks of competition is that this is a team that is not currently at full strength. At the Harold Nichols Open the Cyclones were without Jon Marmolejo (125), Kanen Storr (141), Jarrett Degen (149), Dante Rodriguez (149), Logan Breitenbach (165), and Hank Swalla (174). Storr and Breitenbach were able to make their season debuts in the dual, and it sounds as though several more could do the same this weekend.

For some perspective, the Cyclones were just one match away from reversing history and making the first dual in Dresser history a win instead of a loss. Potentially one different wrestler in the lineup could have changed the outcome in this past weekend’s dual.

It’s because of that the return of junior Dante Rodriguez and freshman Jarrett Degen seems that much more important. The pair entered this season as co-favorites to win the spot, but were unable to compete in the team’s first two official competitions. In the meantime Gavin DeWitt’s performances were split down the middle as he came home with the Harold Nichols Open title in week one, but was unable to close out his match against Drexel where he lost in overtime.

This weekend’s Lindenwood Open could potentially play a big role in determining the team lineup going forward. The best performing Cyclone at this weekend’s tournament will likely get the inside track to receive Iowa State’s entry to the Cliff Keen-Las Vegas Invite. Unlike other major Invitationals such as the Midlands and the Southern Scuffle, CKLV is a single entry tournament which means Dresser won’t be given the luxury of taking multiple guys at a single weight-class.

A big weekend at Lindenwood followed by a dual win against Rider, could put any of the trio currently competing for 149 – DeWitt, Degen, Rodriguez – in the driver’s seat for the rest of the year.

Below is a list of all Iowa State wrestlers registered for the Lindenwood Open this weekend: