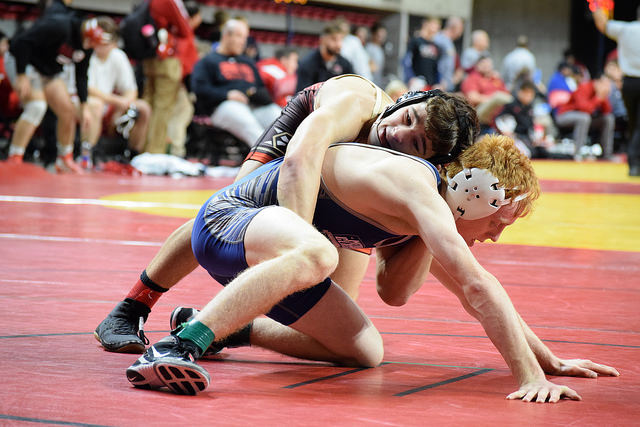 It wasn’t the start Cyclone fans were looking for as Drexel came away with a 21-16 victory over Iowa State in Ames today. Despite getting star performances from a pair of freshmen, Iowa State saw many of their wrestlers lose their matches in the third period.

Things started off back and forth between the two teams, but Cyclone Senior Dane Pestano kicked things off at 184 pounds with a bonus point victory over Owen Brooks. Pestano was in control the entire match and was able to pour some third period points on to seal the extra team point and 14-6 win. Pestano is making his first dual start at 184 pounds since the 2016 season.

Drexel got on the board at 197 when Stephen Loiseau was able to turn redshirt freshman Sammy Colbray over for a first period fall, giving the Dragons their first lead of the day. Things went back to the Cyclones favor following Marcus Harrington’s 12-2 major decision over Sean O’Malley at heavyweight. Drexel’s Tanner Shoap followed with a 5-0 decision at 125 over Jakob Allison to make the score 9-8 heading into the dual’s marquee matchup.

During our preview of this dual we highlighted that redshirt freshman Ian Parker’s matchup against Austin DeSanto had match of the dual written all over it and the two delivered on an exciting bout. The pair traded takedowns in the first period, with little separation appearing between the two until the third period when Parker notched the go ahead score, which also led to him accumulating a riding time point for a 7-5 win.

Making his official Cyclone debut was redshirt freshman Kanen Storr, who put on a show at 141 pounds on the way to a 22-7 technical fall victory over Julian Flores. The win also put the Cyclones out front of Drexel 16-9 with four matches remaining.

Things unraveled for the Cyclones following the Storr win. Both Gavin DeWitt and Chase Straw managed to score the opening takedown in the bouts, and either had a lead or were tied in the third period. At 149 pounds DeWitt fell to Trevor Elfvin 6-4 in sudden victory, while Evan Barczak defeated Straw 10-8.

Neither Logan Breitenbach or Luke Entzel were able to get much going offensively in the final two matches of the dual, going down 5-4 and 5-3 respectively.

When Kevin Dresser was announced as head coach he told the fans there would be some bumps and patience would be required before this program will be able to get back where it was. With seven of the team’s 10 starters either sophomores or freshmen, this young team will need to learn quickly if Iowa State is going to be able to make any large leaps in production. For now fans can hang their hats on Parker and Storr, who both appear to have bright futures.

Up next for the Cyclones will be a trip to Missouri at the Lindenwood Open.