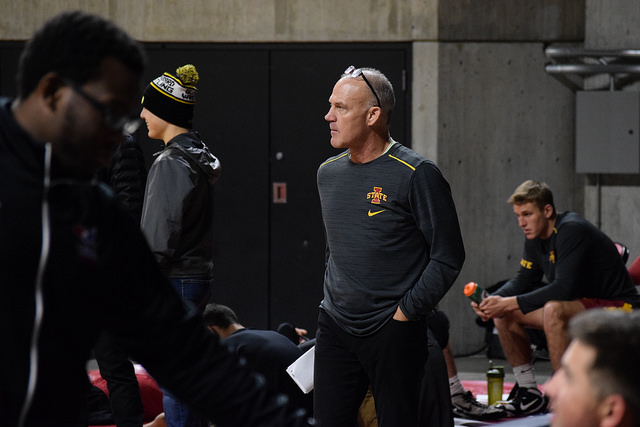 Last weekend’s Harold Nichols Open gave us the first glimpse of the Iowa State Cyclones in action with Kevin Dresser’s squad coming away with five titles at their home open. Despite a successful first weekend of college wrestling several key wrestlers were missing from the mat for Iowa State due to minor injuries. Notably missing was Danny Vega (125), Kanen Storr (141), Dante Rodriguez (149), and Jarrett Degen (149). The first two were labeled as projected starters for the Cyclones, while the latter figured to be the top two contenders for the spot at 149 pounds.

But there were a few wrestlers that were able to make a splash.

While Storr has gobbled up a majority of the attention amongst this true freshman class, Ian Parker (133) has quietly emerged as potential impact wrestler for the team. At last weekend’s open Parker came away with the tournament title downing UNI starter Jack Wagner and Northern Illinois starter Alijah Jeffery (Video). In the middle of a battle with sophomore Markus Simmons for the starting spot, it would appear Parker has taken the first step toward winning the spot.

This weekend’s opponent is scheduled to be true freshman Austin DeSanto who is coming off a pair of wins this past weekend, including a 58 second technical fall. DeSanto’s biggest claim to fame was defeating Spencer Lee in the Pennsylvania state finals this past March, and figures to be a fixture at this weight on the national level.

Also taking a step forward in their respective lineup battles was Chase Straw (157) and Marcus Harrington (285) who placed first and second in their brackets this past weekend. Both wrestlers are also transitioning up to a new weight class this season.

Speaking of Harrington, his matchup against Joey Goodhart will be the only Cyclone taking on a ranked opponent this weekend. Goodhart checks in at #16 on Flowrestling’s latest release. Harrington is coming off a loss to Northern Iowa’s Carter Isley.

The only other ranked wrestler competing in the dual will be Cyclone 141-pound star Kanen Storr, who is ranked #13 by Flowrestling. The rest of Iowa State’s lineup features a lot of unknowns whether that be a pair of wrestlers still vying for the starting spot, a new face taking over, or a combination of both.

Earlier this week our own Tony Hager broke the news that redshirt freshman Danny Vega, the presumed 125 pound starter, would be leaving the program. His departure leaves a rather obvious hole in the lineup as junior Jon Marmolejo has limited experience due to injuries while former Waukee standout Jakob Allison is making the transition back into full-time wrestling after walking on earlier this year.

From our sources it sounds as though it will in fact be Allison who steps on the mat at 125 pounds, and we will also see freshman Gavin DeWitt at 149 pounds, with both Jarrett Degen and Dante Rodriguez unavailable.

We have also heard Hank Swalla should be back on the mat this weekend at 174 pounds, but with the Grand View Open (Live Stream Link available through IAwrestle) also taking place this weekend, the Cyclones have yet to determine who will start at 174 pounds against Drexel and who will possibly go to the open. Swalla is in competition with Luke Entzel and Collin Strickland for the starting spot.