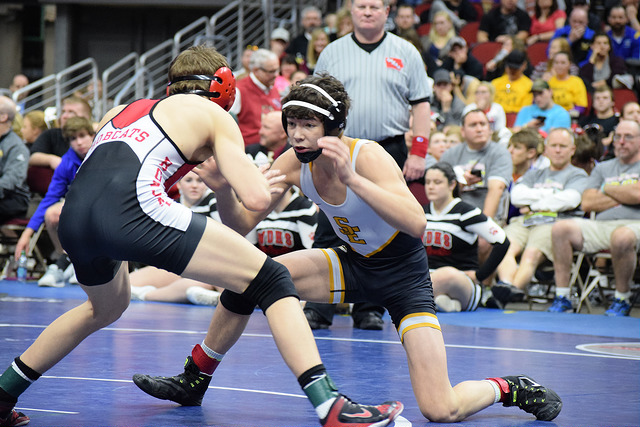 This district features 3 teams in the top 10 in returning points. Southeast Polk leads the pack with 6 returning state place-winners and 116.5 points back from last year.  The Rams are a clear favorite in this district and will be very solid in the lower and middle weights. Des Moines East and Lincoln each return 3 place-winners while Ankeny Centennial returns two.

Looks to be a two team race in District 2.  Bettendorf returns 2 place-winners in Will Jefferson and Mason Morris along with 6 other state qualifiers. Dubuque Hempstead’s Joe Pins returns after a 3rd place finish during his freshman campaign, while 5 other returning Mustangs have state tournament experience.

Epworth graduated 3 state champs and all but 2 of the 97 points from last years state 5th place team. North Scott returns 5 state qualifiers from their 7th place team and looks to be the favorite right now. Eli Loyd (Pleasant Valley) and Tyrell Gordon (Waterloo East) both placed 4th last year at their respectives weights and will look to take the next steps up the podium this year. Jakey Penrith (Cedar Falls) is the only other returning place-winner in the district.

Iowa City West will boast 2 of the best wrestlers in the state in Nelson Brands and newcomer Francis Duggan (PA transfer) to go with returning state place-winner Hans vonRabenau and qualifier Guy Snow. City High returns 4 wrestlers with state experience including place-winners Jacob Dykes and Lance Bormann. The Steffensmeier’s are back for Fort Madison, Ryan and Harlan combine for 26.5 state points last year.

Waverly-Shell Rock returns 4 state qualifiers from last year including a pair of 6th place finishers in Evan Yant and Dylan Albrecht. Host Prairie lost 5 senior qualifiers but is bringing back 24 of the 27 points scored at state last year.  Cullan Schriever a State Champion a year is ago, is once again joined by his brother Colby in the Mohawk’s lineup.  CR Kennedy and CR Washington each have a place-winner back, Ben Sarasin (Kennedy) and Will Foreman (Washington).

Fort Dodge will be looking to knock off the Rams at The Well and drew the perfect district to qualify a lot of their lineup.  In all the Dodgers return 5 state place-winners and will rely heavily on a senior class that boasts 3 D1 recruits.  They also have one of top freshmen talents in the 2021 class, Drake Ayala who was a AAU Champion a year ago.  Lewis Central returns 4 state qualifiers including 4th place finisher Gabriel Kjeldgaard.

Waukee returns 6 qualifiers (4 place-winners) and is lead by 2-TIme State Champion Kyle Biscoglia.  Anthony Sherry leads a strong senior class for the Glenwood which returns 50.5 state tournament points from last year.  Newcomer to the Big Class (3A), Perry returns 2 state-placewinners in the lower weights in Kaleb Olejniczak (4th) & Zachary Thompson (3rd).  Ankeny freshman Caleb Rathjen is a wrestler to watch for the Hawks.