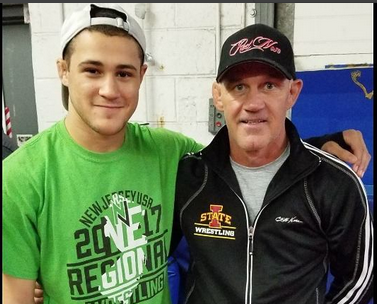 Even though he is currently building a nationally recognized recruiting class for 2018, new Iowa State head coach is already off to a strong start in the class of 2019 landing Bergen Catholic’s Chris Foca. Ranked #6 at 170 pounds by Flowrestling, Foca is considered one of the nation’s top junior prospects.

Unsurprisingly Foca comes in with several top finishes on the national scene bringing home All-American honors in Cadet freestyle in 2016, and he is a two-time Beast of the East medalist – including winning the 2015 title. Most recently Foca finished runner-up at the 2017 UWW Cadet World Team Trials in Greco-Roman. In addition to his national finishes, Foca was also third last winter at the New Jeresey state tournament.

Projecting Foca’s college weight is a little more difficult as he is still two years out from stepping foot on campus, but he appears to be slotted for 174 or 184 pounds currently, two weights the Dresser has been putting a strong focus on shoring up over the past eight months as head Cyclone.

One thought on “Chris Foca Verbals to Iowa State”