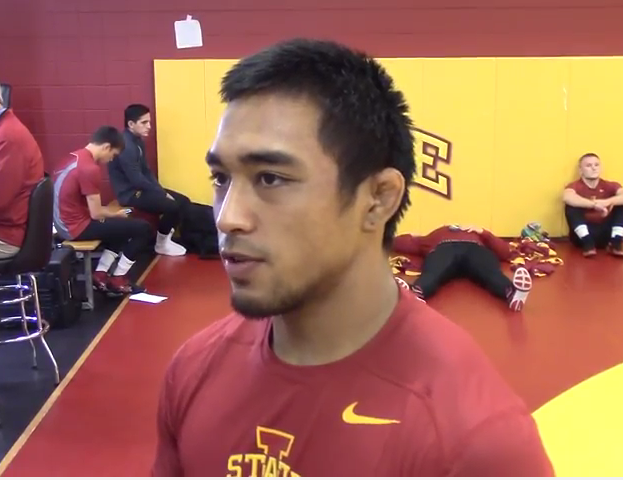 Over the past several years 174 pounds has been one of the stronger weights for the Cyclones with former head coach Kevin Jackson getting three solid years from Tanner Weatherman followed by two years of Lelund Weatherspoon. The led to a stretch of five straight NCAA appearances, one All-American finish and for a lot of that stretch a wrestler ranked in the top 20. For the first time in a while Iowa State will be bringing out a first year starter at this weight (Weatherspoon started at 184 for the Cyclones before moving down as a junior) and on top of that virtually every option doesn’t bring a lot of experience to the table.

There will be a trio of upperclassmen all vying to take this weight over with local product Hank Swalla the potential early leader. Of the group senior Colin Strickland has the most seniority (in fact Strickland and Dane Pestano are the only two wrestlers that remain from the 2013 recruiting class), but despite all that he has missed a lot of mat time. Strickland was 10-7 as a freshman, before wrestling only one match as a sophomore and he would not compete in a single match as a junior.

Challenging Swalla for that starting spot will be fellow sophomore Luke Entzel, who in years past has been on the smaller side of the weight, evidenced by him wrestling at 165 pounds toward the end of last season. The former Montana prep standout is 17-21 in his first two seasons, with one of those losses coming to Swalla.

Unfortunately, Swalla has missed a decent amount of time as well over his first two years, but as we already mentioned he already owns a win over another one of the challengers at this weight, 7-6 against Entzel at the Duhawk Open. This is a really difficult weight to judge for Iowa State with all three of the main contenders having such a limited resume, but keep an eye on the Cyclone Open results for this trio as that will likely play a large role in who becomes the eventual starter.

Speaking of things to keep your eye on, another Ames high school product, Marcus Coleman looks to begin his career at 174 pounds. A three-time state champion, Coleman is interesting for a number of reasons including being a hometown wrestler, a potential future starter at 174 or 184 pounds, and his flat out wrestling potential. A top 100 recruit and former Fargo freestyle finalist, Coleman remaining committed to Iowa State after the coaching transition was a huge win for Dresser. Despite the fact that Coleman will likely be able to hang with the upperclassmen at this weight already, he seems a likely candidate to redshirt, especially given Dresser’s commitment to doing this program rebuild the right way by not rushing guys out there for a quick fix.

It wasn’t much of a secret that both 174 and 184 pounds were weights that were thin in depth when Kevin Dresser took over, so it was to very little surprise when he pursued Maqukeota Valley state champion Alec McDowell later in the recruiting process, and then added JUCO All-American Danny Bush as well. The good news is that while the future of this weight remains uncertain, the present is in good hands as returning NCAA qualifier Dane Pestano is back for his final season for the Cyclones.

Let’s face it. The last two years have been a bit of a mess for Iowa State.

In 2015-16 Jackson added JUCO national champion Pat Downey, who wanted to compete at 184 pounds. The problem was Downey wasn’t eligible to compete until second semester for the Cyclones and in the meantime Pestano was emerging as a potential NCAA qualifier. Then-head coach Kevin Jackson decided to bump Downey to 197 pounds which was likely the stronger move for the team as both wound up wrestling at the NCAAs in 2016. Moving into next season Downey announced his plans to move down to 184 pounds, and with All-American Weatherspoon at 174, Pestano certified and competed at 165 pounds, where he was the team’s first half starter before the weight cut took it’s toll.

So rather than even think about just moving to 174, Pestano told our own Tony Hager (in a Takedown Radio interview) that he will be back at 184 pounds this season, which is good news for Iowa State fans. For starters he was already a NCAA qualifier two years ago in potentially a deeper weight. His biggest win from that year looks to be his 9-2 decision over (now All-American) Drew Foster of UNI, and he also owned solid wins against Central Michigan’s Jordan Ellingwood, Minnesota’s Chris Pfarr who were both NCAA qualifiers last season. A reasonable expectation would be similar results we saw out of Pestano as a sophomore with the hope for improvement.

For now it looks as the depth at this weight consists of solely Bush, who finished eighth at the NJCAA tournament for Iowa Central in 2017.

Dresser sort of “lucked” into McDowell who had plans to attend Iowa State, but it wasn’t until Dresser recruited him that he considered joining the wrestling team. A Virginia Beach folkstyle All-American, McDowell is a bit of a late bloomer and with the right development could turn into a solid Division I wrestler.