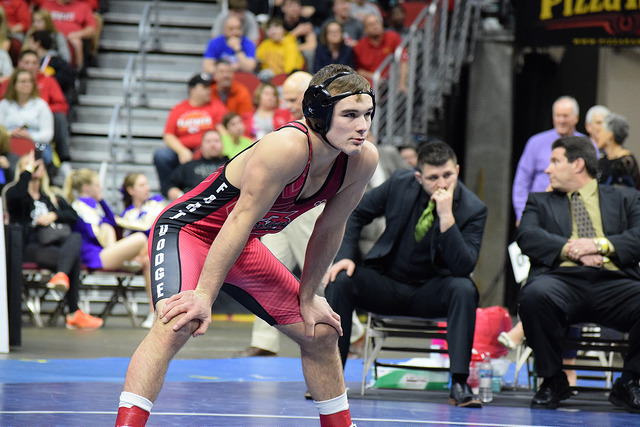 Kevin Dresser continues to work on his 2018 recruiting class, this time landing three-time Iowa state medalist Cayd Lara of Fort Dodge. Lara is the third addition to the 2018 class joining Weston DiBlasi (Missouri) and Ben Kamali (Michigan). Lara is projected to wrestle 157 pounds for the Cyclones.

“Iowa State is the place that I want to be and right now it’s the place to be. I feel that the coaching staff has the same mentality I have, and it’s were I become the best wrestler I can be.” – Lara

Lara is coming off a season that featured his highest placement at the state tournament, finishing second to Iowa City West’s Nelson Brands in a highly contested battle. The following month Lara squared off with 2A state champion Isaac Judge, where he earned a major decision en route to his victory. Additional accolades include seventh and eighth place finishes at the state tournament, Corn Cob and Intermat JJ Classic titles, and also a fifth place finish at USA Wrestling’s Preseason Nationals.

“When my brother committed to UNI I wasn’t being recruited by very many schools so my thought was I would be going to UNI as well. After the last 3-5 months though I really thought about where I wanted to go and Iowa State is that place for me.”

There is little doubt that Lara will be featured prominently in IAwrestle’s Preseason Rankings, no matter what weight he decides to go. Lara was also rated #18 in the latest Fab 50 rankings, and the 13th senior on the list. Along with teammates Brody Teske and Drew Bennett, Lara should be one of three Dodgers in heavy contention for a state title next February.