What Mark Perry Means for Iowa 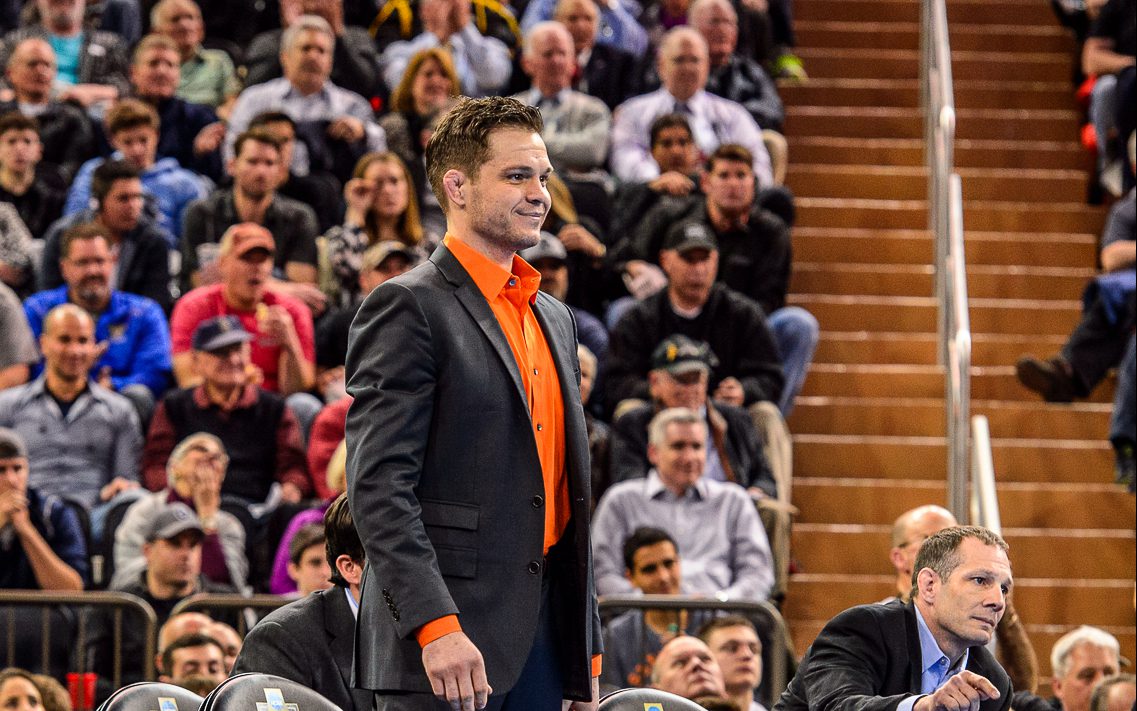 It was all smiles Friday night at the Hawkeye Wrestling Club’s banquet held at the Kirkwood Convention Center in Cedar Rapids. Among the many reasons for the upbeat attitude, Mark Perry’s introduction as head coach might have been the biggest.

“We’re excited to have him,” Iowa head coach Tom Brands commented on the addition of Perry, “This is kinda his introduction, so he’s hitting the ground running. We’re excited because of his mentality. He’s got his family, god, and wrestling, and there is a like minded kind of feel.”

The addition of Perry to the Iowa room is a string of many moves that have been going on throughout the country. The days of only having a quality coaching staff are quickly being passed by programs who are beefing up their senior level clubs, which compliment the university program with additional coaches and workout partners.

Penn State is one of several schools stockpiling their former college wrestlers in their Senior level affiliated club – the Nittany Lion Wrestling Club –  and also recently hired Iowa native and former Lock Haven assistant coach, Eric Thompson, to their NLWC coaching staff. And of course there is that other instate program that recently hired, among others, Brent Metcalf who will serve as Iowa State’s volunteer coach and coach of their Senior level club, the Cyclone Regional Training Center

Enter Mark Perry, the nephew of Oklahoma State coaching and wrestling legend, John Smith, and perhaps more importantly former Hawkeye. In the days before Twitter and age of real time information being available from our phones, Perry’s commitment to Iowa was a huge shock. An upset on what should have been a sure thing for his hometown program.

“I’m excited just to be back,” Perry said, “I grew up in a perennial program, then obviously going to Blair Academy, which is one of the perennials in high school, then coming here. I am just so appreciative to be back. Once you get away from this place you realize how special it is. I couldn’t be more excited to be back here. This the Mecca and this is the place I want to be.”

Perhaps the biggest criticism on bringing Perry into this role is his lack of experience in coaching on the Senior level, and the fact that he has yet to coach a wrestler to a World medal. That’s not to say Perry resume is bare. During his time at Illinois he helped coach Boris Nocachkov, who finished eight at this summer’s Olympic Games, and has also developed Isaiah Martinez into University Nationals champion.

“The depth I look at the sport, the passion I have, and they know my fanaticism and preparation. One thing in wrestling whether it’s college or a high school coach, or international coach we judge and categorize people on accolades. Some of the best coaches, some of the most technical coaches I know didn’t wrestle Division I. Some of them didn’t even wrestle, they just studied the sport. I think that’s sort of silly because what other sport do you see at the professional level where (the coaches) were the stars of their sport?

“I’m not too concerned on people thinking you have to be a World or Olympic champion to be successful. To me there are many international coaches, that if you look in the corner at the Olympic Games, that were successful as I was and that means nothing now. My accolades as a competitor mean nothing for what I can do as a coach.”

Of course this move for Perry will remove him from the Division I wrestling scene and place him in a more behind the scenes role when it comes to the University’s competitors. While Perry will be unable to sit in Iowa’s corner during attached competition, nor will he be able to recruit for the team as he was renowned for at his position at Illinois. Instead, Perry’s main goal will be the development of the HWC wrestlers – which include four of the five starting seniors from the 2017 squad, Olympian Dan Dennis, and former NCAA champion Matt McDonough.

For Brands it’s all about building up the amount of talent within the club, and that means winning gold medals. In order to have that kind of talent to continue to train, Brands recognizes the need for funding, and complimented Perry’s ability to raise those funds.

“What we’re looking to do is have a war chest that is among the best in the nation,” Brands said on the direction of the HWC, “For every dollar we spend, it’s already there. Right now every dollar we spend we have to raise. Our board has been basically ‘We’ll raise the money you just tell us how much you need’ and that’s not fair. So now let’s get it built up. And you feel that momentum.

“He’s Mark Perry, he’s very charismatic, he can raise money. So it’s not just coaching the Hawkeye Wrestling Club and elite level athletes it’s his mindset making this the best place. I can’t predict the future but this guy right here is excited.”

For all of Perry’s lack of elite credentials when it comes to coaching on the Senior level there is little denying that his ability as a fundraiser is certainly at a level where he could be considered among the best. Prior to taking the Associate Head Coaching position at Illinois, Perry was the co-head coach at Cal Poly University a position where he himself had to raise the funds for his salary and for the scholarships of wrestlers he recruited.

There is also a clear positive momentum among Iowa fans with Perry’s arrival, as the banquet/new coach introduction produced a record 350 attendees for the club event, and also brought over $74,000.

For now Perry is definitely excited about his new role and as for his name seemingly always connected to any new head coaching position that comes available he doesn’t view that as his current priority.

Listen in to Potentially Dangerous as Hager and Ross breakdown the HWC banquet and Perry introduction:

One thought on “What Mark Perry Means for Iowa”