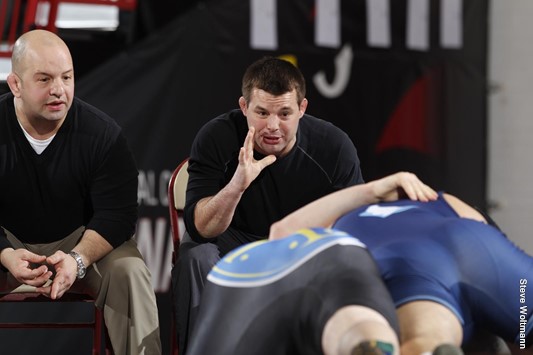 After leading the Augustana wrestling fortunes for the last decade, Eric Juergens has decided that his growing family takes priority and he is stepping down as the Vikings head coach. He leaves with an overall dual meet record of 78-69 and one College Conference of Illinois & Wisconsin championship.

“I’m beyond grateful for my experience at Augustana,” said Juergens, who started his career as the interim head coach in 2007-08. “It was a lot of fun taking this program to the point where we are a perennially solid team that is a contender in the conference and in the region every year.”

In his first three seasons at Augustana Juergens had a record of 11-30 in dual meets and finished fourth in the CCIW once and third twice. His Vikings were also 12th twice in the NCAA West Regional and 10th once. Heading into the 2010-11 season the fortunes began to change and in the last seven years his teams did not suffer a losing season. The Vikings were 67-39 over the last seven seasons and won the CCIW title in 2013-14. Three times they placed second in the conference in since 2010-11.

“Eric has done a tremendous job leading the Augustana wrestling program the last 10 years,” said Director of Athletics Mike Zapolski. “We are grateful for his dedicated effort to build our level of competitiveness and roster size. Eric’s intensity and work ethic has become an important part of the program’s culture and he leaves this team in an outstanding position to make continued improvement.”

Juergens coached a total of 13 CCIW individual champions and four NCAA Division III All-Americans during his tenure. This past winter the Vikings were 8-6 in dual meets, placed second in the CCIW and took 17th in the NCAA Division III National Tournament. Two of his charges, junior Christos Giatras (Lemont HS, Lemont, Ill.) and Adarios Jones (Moline HS, Moline, Ill.) earned All-American honors in 2017. Giatras was seventh at 184 pounds while Jones took third at 285 pounds.

“This was a hard decision,” said Juergens.  “I love the sport of wrestling and enjoy helping young men develop both on and off the mat. However, we have two young children and my wife and I thought it best to step away from the day-to-day duties of running a top-flight college wrestling program. ”

Juergens may be stepping away as the head coach but he has an interest in staying involved with the program in some capacity.

“I plan on staying committed to helping student-athletes in the program as much as I can but in a different role,” he said. “I always told our wrestlers that our program was a family and things come and go and life changes but our family is always there for us.”

Zapolski was pleased that Juergens showed an interest in still being involved with the Vikings.

“We anticipate the opening will generate significant interest and we appreciate Eric’s willingness to play an active role in the transition,” said Zapolski. “We are excited that he may potentially remain involved with the program.”

Juergens had a prolific career as a competitor. Wrestling at the University of Iowa, he won individual national titles both as a junior (1999-00) and as a senior (2000-01). He was third in the NCAA tournament in his freshman (1997-98) and sophomore (1998-99) seasons. As a senior he served as team captain and was the Hawkeye’s Most Valuable Performer. He was the Big Ten Wrestler of the Year and selected as the University of Iowa’s “Male Athlete of the Year”.

During his junior campaign he had an undefeated 33-0 record en route to his first national title. Along the way he won the Big Ten title and was the champion at the Midlands Tournament. He was given the Art Kraft “Champion of Champions” award at the Midlands.

He finished third in the Big Ten both his freshman and sophomore seasons prior to placing third in the national meet each year. He was named the NCAA “Freshman of the Year” at the completion of the 1997-98 season.

His high school career at Maquoketa High School in Maquoketa, Iowa was one of unparalleled success. He was 144-0 during his four years, compiling 100 pins and winning four straight state titles. He was the Northern Plains Regional champion and was first team Amateur Wrestling News All-American. He was a second team Asics Tiger All-American as well. He placed second at Cadet Nationals as a sophomore and was an honor roll student.

Juergens graduated from the University of Iowa in 2001 with a B.A. degree in English. He served as a volunteer assistant coach at Augustana in 2006-07 and before that he spent two seasons as a volunteer assistant at Loras. He is the owner of Young Guns Wrestling Club and served as the camp director for the University of Iowa Wrestling Camps from 1998 until 2002.
JUERGENS’ RECORD AT AUGUSTANA