IWWR: Louive and Watters each take 4th at the U.S. World Team Trials 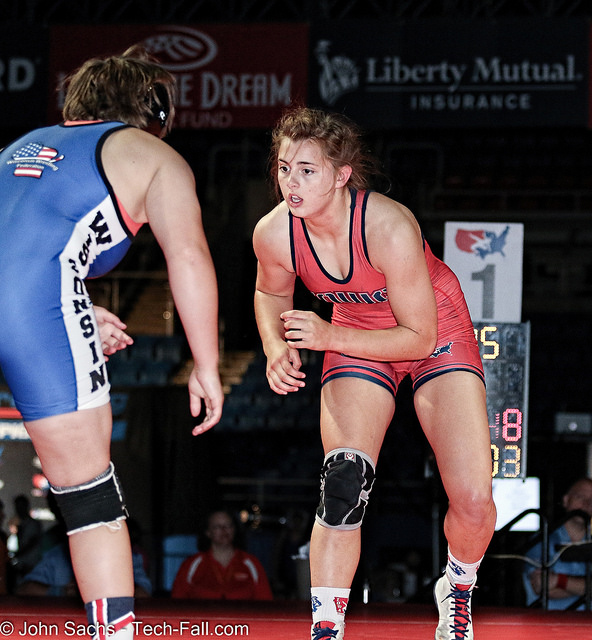 Two of Iowa’s top senior-level athletes hit the mats for the U.S. World Team Trials April 28th and 29th in Las Vegas with both wrestlers taking 4th place in their weight classes.

Lauren Louive wrestling out of the Hawkeye Wrestling Club in Iowa City wrestled in the 58 kg division representing the New York Athletic Club. Louvie opened the tournament with a decisive 13-2 tech fall over Alicia Reyes of Missouri Valley Wrestling Club, followed by 0-8 loss by decision to #1 seeded Kayla Miracle of Sunkist Kids Wrestling Club. On the consolation side of the bracket, Louive had a bye followed by the third place match against Jacarra Winchester of Titan Mercury Wrestling Club. Louive lost by 0-11 tech fall to take fourth in the tournament. Olympic gold medalist Helen Maroulis was the champion of the 58 kg weight class.

Rachel Watters of Ankeny, a 155 pound freshman All-American from Oklahoma City University wrestled in the 69 kg division representing the New York Athletic Club. Watters, who has been coming off an injury from the college season, opened against Alexandria Glaude of McKendree Bearcat Wrestling Club. Watters took the match 4-2 before facing 2016 Olympic Team Trials champion, Tamyra Mensah of Titan Mercury Wrestling Club where she lost by 0-10 tech fall in the semi-finals match. On the consolation side, Watters won by 4-0 decision over Hannah Gladden from the University of the Cumberlands. Watters’ final match was for third place against Niauni Hill of Lindenwood University-Bellevue. Watters battled to a 2-6 loss by decision to take fourth for the tournament. Mensah went on to win the world team spot at this weight.

Watters plans to wrestle later in May at the UWW Junior World Team Trials where she has spent the last two years holding the 72 kg position.