DIII Wrestling Championships Coming to Cedar Rapids in 2020 and 2022 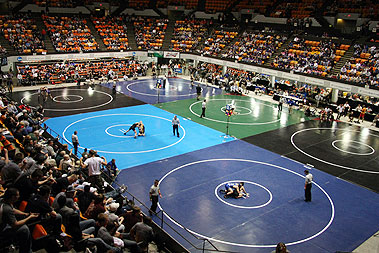 The NCAA has selected more than 600 host sites for preliminary rounds and finals of predetermined championships in Divisions I, II and III to be held from 2017-18 through 2021-22.

The NCAA received more than 3,000 bid submissions from NCAA member schools, conferences, sports commissions and cities vying to host predetermined rounds for 84 of the NCAA’s 90 championships. A total of 613 sites were awarded for this cycle. The respective NCAA sports committees and the divisional championships cabinets/committees reviewed the bid proposals and selected the sites.

There were 43 states selected to host at least one round of an NCAA championship, with Pennsylvania leading the way with a total of 53. Florida was awarded the second most with 51, while Indiana totaled 41, the third highest.  Buoyed with a total of six fall championships for the 2018 Division II National Championships Festival, Pittsburgh was awarded 22 preliminary rounds and finals, the most of any city.

Criteria for selecting the host sites included creating what will be an exceptional experience for the student-athletes, along with adherence to NCAA bid specifications. Specifications can include, but are not limited to, providing optimal facilities; ease of travel to the location and ample lodging; and adherence to NCAA principles, which include providing an atmosphere that is safe and respects the dignity of all attendees. The site selections follow the NCAA Board of Governors’ vote to allow consideration of championship bids in North Carolina.

“We want to thank everyone who submitted a bid for this cycle of championship site selections and for their continued commitment during the process,” said Joni Comstock, NCAA senior vice president of championships. “We look forward to working with our membership, the cities and local organizing committees who may host for the first time, as well as the groups who will repeat as host sites. I also want to acknowledge and thank the sports committees that reviewed these exceptional bids and made the selections based on providing the best possible experience for our student-athletes, coaches and spectators.”

“Working with our valued host institutions and conferences, as well as sports commissions and cities, to create a great atmosphere for student-athletes, coaches and fans with the men’s and women’s basketball tournaments is our goal every year,” said Dan Gavitt, NCAA senior vice president of basketball. “We’re looking forward to working with the groups that earned preliminary-round basketball sites, as well as the local organizing committees already slated to host NCAA Men’s and Women’s Final Fours.”

Other highlights of the championship sites include:

• Scheduled to open this September, Little Caesars Arena in Detroit was awarded the 2020 Men’s Frozen Four and the 2022 Division I Wrestling Championships.
• When the Division I Wrestling Championships travel to U.S. Bank Stadium in Minneapolis in 2020, it will mark the first time the championships have been held in a football stadium since 1997, when they were held at the UNI-Dome in Cedar Falls, Iowa.
• The Division I Women’s Volleyball Championship returns to Minneapolis in 2018 for the first time in 30 years when it will be at the Target Center. The University of Minnesota, Twin Cities, previously held the 1988 event on campus at Williams Arena.
• The Division II winter championships festival returns to Birmingham, Alabama, in 2021, marking the first time any city or venue has held a festival on three consecutive occasions.
• The final game of the 2018 Division III Football Championship will be played at Woodforest Bank Stadium in Shenandoah, Texas, marking the first time in 26 years that the game will be played somewhere other than Salem, Virginia.
• Dayton will continue to host the NCAA First Four through at least 2022, as it has served as the site for the start of the Division I men’s basketball tournament since 2001. University of Dayton Arena has hosted 117 men’s basketball tournament games, the most of any facility.
• The first- and second-round men’s basketball games in Greensboro, North Carolina, in 2020 will mark the first time since 2012 that tournament games will have been played in that venue. Greensboro Coliseum has hosted 63 NCAA men’s tournament games, which is fifth most in tournament history.
• 2022 will mark a return of NCAA basketball to three cities that have not hosted the men’s tournament in decades. The men’s West Regional will be played in San Francisco, which has not been a tournament site since 1960, while Fort Worth, Texas, which hasn’t been a tournament site since 1970, will host 2022 first- and second-round games. Cincinnati also will host first- and second-round action, marking the first time in 30 years the tournament will have been staged there.
• 2019 also will mark a return of men’s tournament action to sites that have not recently hosted the event. Columbia, South Carolina, last hosted games in 1970, while Hartford, Connecticut, has not served as host since 1998.
• Previous cities selected to host future Men’s Final Fours include San Antonio (2018), Minneapolis (2019), Atlanta (2020), Indianapolis (2021) and New Orleans (2022).
• The NCAA has awarded Division I Women’s Basketball Championship hosting duties to seven cities for regional play in 2019 and 2020, with five of the seven arenas hosting the championship for the first time.
• Selected to host regionals in 2019 are Albany, New York (Times Union Center), Chicago (Wintrust Arena), Greensboro, North Carolina (Greensboro Coliseum) and Portland, Oregon (Moda Center), with play taking place March 29-April 1.  Albany, which also will serve as a regional host site in 2018, will be hosting for the third time, while Greensboro will be hosting its fifth regional. Wintrust Arena, as well as the Moda Center, will be hosting the NCAA Division I Women’s Basketball Championship games for the first time.
• In 2020, Fort Wayne, Indiana (Allen County War Memorial Coliseum), Greenville, South Carolina (Bon Secours Wellness Arena), Portland (Moda Center) and Dallas (Moody Coliseum) will serve as the four regional sites March 27-30.  Bon Secours Wellness Arena, Allen County War Memorial Coliseum and Moody Coliseum will be first-time hosts.