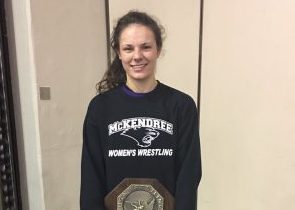 Megan Black of Batavia is a red-shirt Junior for McKendree University (Lebanon, IL). Saturday’s Nationals saw Black dropping from her usual 58 kg (128 lbs.) to wrestle at 55 kg (121 lbs.). Black, ranked #8 at 58kg, went 4-0 for the day. Black opened the tournament with a 13-2 tech fall over Kailyn Ramos of Oklahoma City University followed by a 9-2 decision over McKendree teammate, Lindsey Spjut. In the semifinal bought, Black secured a 6-5 decision over Tamara Tillman of Missouri Baptist, setting up the championship match against teammate #10 ranked Gabrielle Weyhrich where she finished the tournament strong with a fall at 4:47. The championship finish secures Black’s spot on the University World Team.

There were three Iowa high schoolers wrestling in the Cadet and Junior divisions:

Felicity Taylor of South Winneshiek went 4-1 to take 2nd place in the 106 pound, Junior weight class. It is important to note that the 45-participant, 106 pound weight class was the largest Junior weight class of the tournament. Taylor started the tournament with a bye followed by a 21-second fall over Searra Inman of Michigan. In the third round, Taylor picked up a 6-0 decision over Jenna Bacich of California to advance to the quarterfinals. In the quarters and semifinals she faced two more Californians, Angelina Gomez and Cassidy Do winning by 4-2 decision and 10-1 major decision. In the championship finals, Taylor faced Junior World Team Member, Mckayla Campbell of Ohio. Taylor battled hard but gave up a 3-8 decision to take 2nd place and improve upon last year’s 7th place performance.

Dominique Mosier of Clear Creek-Amana bumped up from her high school weight of 138 to wrestle in the 152 pound Cadet division. Mosier went 0-2 as a Cadet and followed that up the next day by wrestling in the 144 pound Junior division where she also went 0-2 for the day.

Ciana Sonberg of Charles City went 2-2 for the weekend at 164 pounds. Sonberg started with a pin over Kendra House of Texas at 3:08, followed by another fall at 3:04 over Taylor Cutler of Michigan. In the quarterfinals, Sonberg lost by 0-6 decision to Alyvia Fiske of California who was last year’s runner up and went on to win the weight class. On the consolation side, Sonberg faced Alexi Young of California where she gave up a tough 3-5 decision, placing her one win outside of an All-American finish.