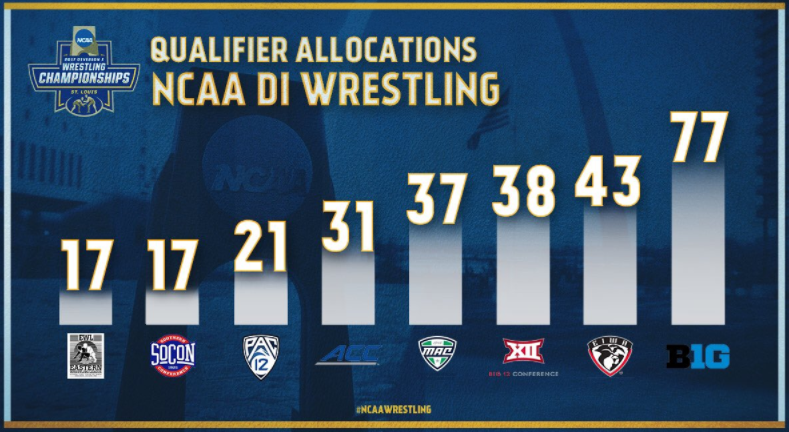 INDIANAPOLIS –The NCAA has announced a correction to the qualifier allocations for the 2017 NCAA Division I Wrestling Championships as listed in the chart below.

Additional matches were identified that weren’t included in the original ratings percentage index (RPI) calculation. After the new RPI was calculated, that led to an evaluation of the original allocations. The chart reflects the corrected allocations for each qualifying tournament.

Each qualifying tournament was awarded spots per weight class based on current year data.  Each wrestler was measured on the following: Division I winning percentage at the weight class; ratings percentage index (RPI); and coaches’ ranking.

After all of the qualifying events have concluded, the NCAA Division I Wrestling Committee will meet in-person to select the remaining 49 at-large qualifiers, which will be announced on March 7.  All weight classes will consist of 33 wrestlers.  The at-large selections will be made based on the following criteria: head-to-head competition; quality wins; coaches’ ranking; results against common opponents; RPI; qualifying event placement; and winning percentage.

The coaches’ rankings are compiled by a vote of coaches representing each conference. For ranking purposes, coaches may only consider a wrestler that has been designated as a starter at a respective weight class. In order to be eligible for the rankings, wrestlers must have participated in at least five matches against Division I opponents in the weight class and have wrestled within the last 30 days.

To be eligible for an RPI ranking, a wrestler must have a minimum of 17 Division I matches at a given weight class.

The 2017 NCAA Division I Wrestling Championships takes place at Scottrade Center in St. Louis March 16-18. A limited number of single session tickets are still available, in addition wrestling fans can buy and sell official tickets through the NCAA Ticket Exchange™. This gives ticket holders who are unable to attend a session a place to safely sell their tickets. Buyers can also get their tickets knowing the tickets are authentic and guaranteed, visit here for more information.

A full description of the entire selection process is in the 2017 Division I Wrestling Championships Pre-Championships Manual which is available at NCAA.org.

One thought on “DI qualifier allocations for 2017 championships”