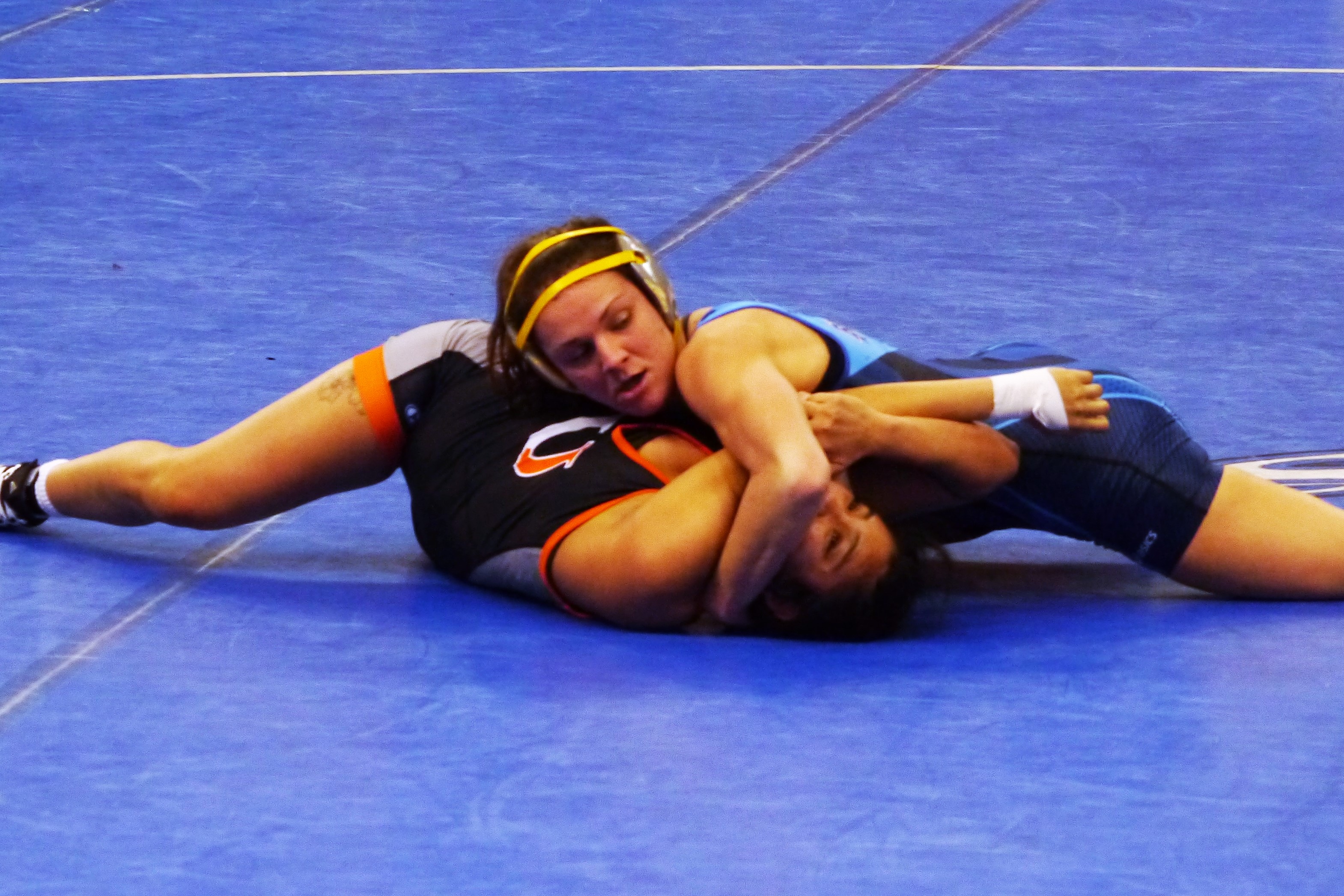 The women’s wrestling season came to a close this past weekend with 30 college programs competing in the Women’s Collegiate Wrestling Association (WCWA) Nationals in Oklahoma City. Five Iowans competed for their respective colleges and four came home with All-American status.

Megan Black, a redshirt junior from Batavia, wrestled at 130 pounds for McKendree University (Lebanon, IL). Black, who was ranked #2 at 130 pounds in the WCWA Rankings (February 1) pinned her way to the finals.

In her opening round, Black faced Justice Losee of Waldorf University (Forest City, IA) where she picked up her first pin of the tournament. Black’s next fall was over Josselyn Pacheco of Jamestown University (Jamestown, ND) followed by a fall over Ismilena Valles of University of the Cumberlands (Williamsburg, KY) in the quarterfinals. In the semifinal match, Black picked up her final pin of the tournament over #3 ranked Shelby Hall of Campbellsville University (Campbellsville, KY). In the finals, Black faced Cheyenne Youngblood of Missouri Baptist University (St. Louis, MO) who was ranked #6 at 136 pounds. Black battled to a 3-10 loss and took 2nd place at 130 pounds. This was Megan Black’s second year as the runner up national champion and third year as an All-American. Black ended the season with a 25-2 record.

Justice Losee, a senior from St. Ansgar, wrestled for Waldorf University at 130 pounds. Losee opened the tournament by giving up a fall to fellow Iowan, Megan Black of McKendree. In the consolations, Losee picked up a fall over Asia Igafo of Wayland Baptist University (Plainview, TX) as well as a 6-5 decision over Cynthia Aldama of Ferrum College (Ferrum, VA). In her final match of the tournament, Losee lost by 0-10 tech fall to #5 ranked Jennifer Anderson of Simon Fraser University (Burnaby, B.C.-Canada). Losee finished the season with a 6-4 record.

Anna Poyner of New Hartford is a 136 pound junior from Missouri Valley College (Marshall, MO). Poyner started the tournament with a fall over Sha’nice Jackson of Ottawa University (Ottawa, KS) before giving up a pin in the second round to #4 ranked Gabby Garcia of King University (Bristol, TN). Poyner continued in the consolations with three pins and a tech fall over Esmeralda Garcia (fall) of Cumberlands, Kate Nestingen (tech fall) of Life University (Marietta, GA), Gladdys Palma (fall) of Southern Oregon University (Ashland, OR) and Heiley Garcia (fall) of Oklahoma City University. Poyner gave up a fall to #3 ranked Koral Sugiyama of Campbellsville followed by a 2-12 tech fall to #5 ranked Solin Piearcy of Menlo College (Atherton, CA). Poyner earned a 6th place finish and All-American status while finishing her season with a 22-15 record.

Jasmine Bailey of Iowa City wrestled at 143 pounds as a junior for McKendree University. Bailey who was ranked #4 opened with a 10-0 tech fall over Marisela Deloyo-Fierro of Missouri Baptist followed by a pin over Tayler Kleemoff of Ferrum College. In the quarterfinals, Bailey faced #5 ranked Desiree Zavala of Southern Oregon where she lost a 3-10 decision. In the consolations, Bailey picked up a 10-5 decision over Raquel Gray of Grays Harbor College (Aberdeen, WA) and a 9-4 decision over Sarah Bollinger of Missouri Baptist before losing a 0-6 decision to #3 ranked Montana Drum of Missouri Baptist. In her final match of the day, Bailey won a 12-6 decision over Rachael Chinn of Menlo College to take 5th and capture her second All-American title. Bailey ended the season with a 29-10 record.

Rachel Watters of Ankeny is the #4 ranked 155 pound freshman for Oklahoma City University. Watters wrestled the tournament at 170 pounds where she met Kacie Moorhouse of Grays Harbor College in the first round. Watters won a 6-3 decision followed by a loss by fall to #4 ranked Brittany Marshall of Wayland Baptist. In the consolations, Watters picked up a 10-0 tech fall over Katherine Dennise of Pacific University (Forest Grove, OR), a fall over Kaitlyn Hill of Campbellsville, and a 6-3 decision over Precious Bell of Menlo College. Watters gave up a 3-14 tech fall to Brandy Lowe of McKendree before facing Kacie Moorhouse again and securing a pin to take 7th place and secure her All-American title. Watters finished with a 28-7 record for the season.

The WCWA Nationals concludes the regular season of college wrestling, however the women will continue to compete in the following USA Wrestling events:

In addition, Rachel Watters who has been the 72 kg Junior World Team member for the last two years will have one more year of eligibility to compete in the UWW Junior Women’s Nationals, May 19-21 in Irving, Texas.