Class 1A First Round Must Watch Matches 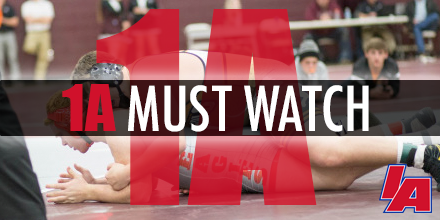 This match is tough to get a read on. Cassady has been very impressive throughout grade school and is undefeated so far in high school. He has not been tested very often this year, but at the same time, he hasn’t matched up with any of the other top 10 1A guys. Nieman has undoubtedly had the tougher schedule, but that wont score any match points for you at the state tournament.

Decker has had a bit of an up and down season. He has some wins that make you think he is a title contender, but then he has some losses that make you think he will battle to reach the podium. Leopard comes in fresh off his first 1A loss of the season to Chase McLaughlin. Decker has a win over McLaughlin this year, but he also has a lose to him too. This match will be very important to win for both wrestlers because the loser will find himself in an extremely tough first round wrestle back, and should they survive that they will have another high quality kid to place.

These two returning state place-winners will not get a warm up match before being throw into the heat of battle. Phillips was a 4th place finisher last year while Wilson finished 7th. Both wrestlers are back at the same weight from last year. Based solely off last years tournament, you could give Phillips the upper hand but he was also out for the first half of the season with an injury.

It wouldn’t be the state tournament without a first round match between two ranked wrestlers that didn’t have huge team race implications. Missouri Valley and Sibley-Ocheyedan both have hopes of leaving Des Moines a team trophies, but one of these two will find themselves on the backside right away. These two Western Iowa boys have not met up yet this year. Haynes is a returning finalist while Sayler went 1-2, but not before losing an overtime match in the quarterfinals. This is another match where the loser will immediately be in a very tough wrestle back.

If you havent heard of Gabe Pauley yet, it’s only because an injury kept him out of the postseason last year. If you haven’t heard of Rogan Pforts yet, it’s only because you didn’t pay any attention to last years state tournament. Pforts has shown he can wrestle with anyone in this bracket. He may have 5 losses, but they have all been tight matches with some of the studs at this weight. Pauley hasn’t lost to anyone in 1A this year.

Two top 4 guys wrestling first round, as a fan is there anything better you could ask for? Arbegast has been battling a chronic injury, but dont expect him to show many effects of it though with this being his final trip to Wells Fargo. Dierking is an 8th place finisher from last year while Arbegast has yet to make the podium even though he has been close.

This match up goes hand in hand with the next match up between Bishop and Irons. The reason for that is all 4 wrestlers are in the same quarterfinal so one of these guys will be out after the first day. Both of these seniors will get one final time to try and make the podium after both of them went 1-2 last year.

This first round match up of ranked wrestlers finds two wrestlers at very different points in their careers. You have the returning finalist in Bishop who has made a name for himself over the course of the past few years, then you have Irons who was relatively unknown coming into the season. Irons has put together some very solid wins this season, but if he can pull of the upset this would be his biggest one yet.

These two met in last years consolation quarterfinals at 195lbs with Francis coming out on top in a tight 4-3 match. Francis lost at districts to Meinders of AGWSR to put him in the 2nd slot, setting up this matchup. Will Francis get the best of Bonestroo again or can the Western Christian wrestler turn the tables.

Since moving up to 285 from 220 last year, Matt Naig hasnt lost to a single 1A heavyweight. Both wrestlers were place-winners last year with Anthony coming back to take 7th after a first round loss, and Naig finishing 5th at 220. Anthony was upset at districts setting up this first round match, while Naig had an impressive victory over Montana Jackson of Akron-Westfield to claim the district title.