All Eyes on Brooks as Hawks Head to Indiana 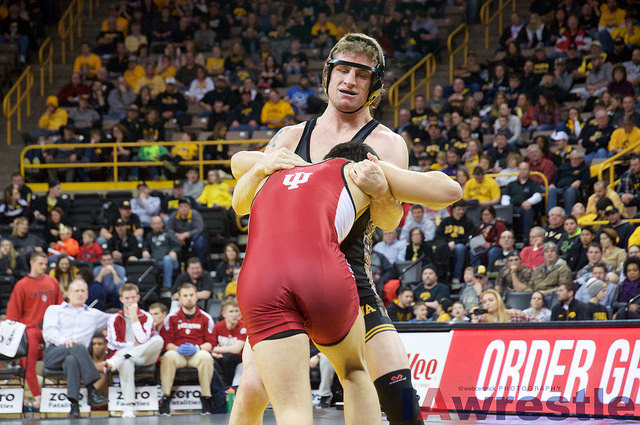 After losing two straight duals to Oklahoma State and Penn State the Iowa Hawkeyes have started a three dual winning streak, and have won 22 of their last 30 individual dual matches, with 12 of those coming by way of bonus. The Hawks will head to Indiana for a Friday night dual before turning around and hosting Nebraska on Sunday for Senior Day.

The two biggest stories coming out of last weekend are without a doubt Thomas Gilman managing to not only come back down 8-0 in a match against Minnesota’s Ethan Lizak, but the senior All-American also managed to pick up a fall as well. Unfortunately Gilman’s comeback likely prevented Joey Gunther for getting more headlines as the redshirt freshman knocked off #10 ranked Nick Wanzek at 165 pounds in the same dual.

It will be senior night for the Hoosier when the Hawkeyes enter University Gym in Bloomington, Indiana and the lone starting senior will at 184 pounds where Nate Jackson will look to take on Sammy Brooks. This match already figured to be the marquee head-to-head in the dual, but with Jackson wrestling his last home dual there will be extra emphasis from the Hoosier side.

Gilman will enter his matchup with Oliver holding a 2-0 series advantage, winning by fall and major decision last year. The biggest thing most will be interested to see is how Gilman responds after his emotional come from behind win against Minnesota’s Ethan Lizak last weekend. Gilman is known for letting it fly when he goes out on the mat and he will likely be eager to return to normalcy in this match.

Bryce Martin is far from the most difficult wrestler that Gunther has faced over the past several weeks, but the freshman is coming off arguably the biggest win in his career, and he has now moved up to #19 in Trackwrestling’s rankings. How Gunther handles the success, and whether or not he can continue what has been a stretch of solid wrestling will remain to be seen. Martin comes in #30 in the first set of the NCAA Coaches’ rankings, and Nebraska’s Dustin Williams is #27. Gunther feels more and more like a safe bet to qualify for the NCAA tournament, but a pair of insurance wins this weekend wouldn’t hurt to have on the resume.

Without a doubt, the biggest match in the dual will happen at 184 pounds where Sammy Brooks will need a big victory over Nate Jackson to secure a top seed at next month’s Big Ten Championships. Brooks and Jackson met twice this season at the Midlands with Jackson winning the first match 10-5, and Brooks winning the second 3-1 in the third place match. With a Sunday matchup with Nebraska’s TJ Dudley looming, this match is in the “must win” category to remain opposite of Penn State’s Bo Nickal at the conference championships.

Senior All-American Cory Clark did not wrestle Friday night against Wisconsin, but was in the lineup Sunday against the Gophers. Brands has stressed that he is taking a conservative approach with his wrestler and exactly what that game plan entails usually isn’t revealed to the public until moments before each dual. Since Brands likes to play conservative, we will as well with our lineup projection, listing Phil Laux.

Wrestle Stat is taking the Hawkeyes heavy in this Friday night dual, picking Iowa to win all ten matches – even without Clark in the lineup. The Hawks are certainly capable of meeting that expectation, though they may need a couple breaks to go their way to do so.