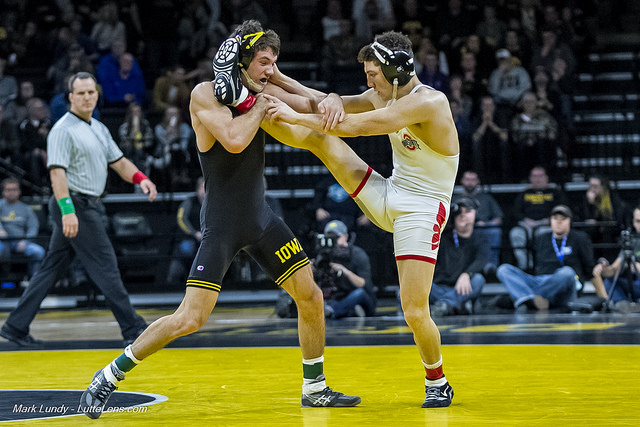 After wrestling three of the nation’s top four teams, the Iowa Hawkeyes have officially been through the gauntlet and now look to be favored in their last four conference dual matchups. For back-to-back weeks we will see Iowa host a dual in Carver and face a team on the road in the same weekend, with Friday’s matchup with Wisconsin at home, and then Sunday’s dual up north in Minnesota.

The Hawkeyes are coming off a big victory over #4 ranked Ohio State the previous weekend, downing the Buckeyes 21-13 on their home mat. Both squads were without one of their top wrestlers, as Ohio State’s Kyle Snyder competed in a freestyle tournament in Russia, and Iowa’s Cory Clark sitting the dual as well as he recovers from his shoulder injury. According to Brands, who spoke with the media following his team’s win over Ohio State, the plan is to have Clark back in the lineup this weekend which is a positive sign for the Hawkeyes.

Looking forward to this Wisconsin matchup it appears that this squad could score the most points in a dual against Iowa since the 2013-14 season, which was the last time the Badgers managed to score double digits against the Hawkeyes. Last year Iowa came out on top by the score of 31-3.

Senior Topher Carton continues to be a wrestler to watch as we head down the stretch of the regular season. Coming off the Midlands and Michigan road trip Carton appeared to be firing on all cylinders and was starting to generate buzz as a potential All-American candidate. While some of that talk has cooled off after losing two straight matches in which he carried a lead into the third period, fans and opponents alike should count Carton out at their own peril. Conditioning doesn’t appear to be the cause of Carton’s last two losses, but rather a lack of offense from the senior. Carton has a fantastic high crotch shot if he is able to set it up and if he is able to get back into his groove he should prove tough to beat. His opponent Cole Martin is currently riding a four match losing streak.

Redshirt freshman Cash Wilcke enters Friday’s dual coming off three straight matches against top ten opponents and unfortunately for Iowa’s 197 pounder it doesn’t look to get much easier. Wilcke will face #10 Ricky Robertson Friday and should also see #2 Brett Pfarr of Minnesota on Sunday, giving him five straight matches against the top 10. Much like Wilcke, Roberston began his career as a 184 pound wrestler before moving up to 197 this season. These two met earlier in the season at the Midlands where Robertson was able to come out on top 6-3.

Even if Clark sits out Friday, fans are likely encouraged by junior Phil Laux’s performance last weekend when he lost by decision to #1 Nathan Tomasello. Laux was able to fight off several of Tomasello’s shots, which certainly bodes well for him being able to defend shot attempts from the rest of the country. If Laux is finally able to keep his opponents off his legs from the neutral position he may be able to get to his own offense.

Per Track’s rankings there should be six head-to-head meetings where both wrestlers are ranked, and Iowa will be favored in five of those. The lone exception is the 165 pound slot where #3 Isaac Jordan will face #22 Joey Gunther.