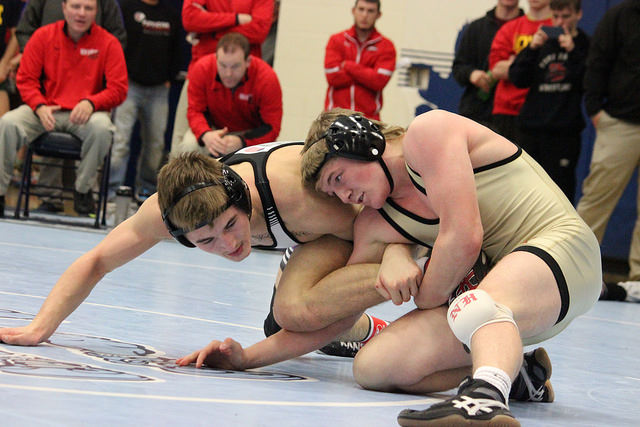 They are future teammates (both headed to UNI next fall), but we have seen Geerts and Lara square off twice this season with both wrestlers walking away with a win. The first meeting (video of that match here) was a 3-1 win for Lara at the Independence Invite, but Round 2 saw Geerts win an exciting 4-2 match at the Cedar Rapids Jefferson Invite a month later.

He has been one of the most heralded freshmen to step foot on the mat in our state, and Mason City’s Schriever delivered on the hype by defeating then #1 ranked Oldham in the Keith Young Invite finals. He certainly hasn’t looked back since that win, as he will carry his perfect record into the post season.

This was a matchup 3A fans had been waiting for all season with Stotts, a returning state champion, squaring off with Barnes, a Fargo All-American. Both wrestlers have established themselves as the clear #1 and #2 at this weight, but in their first meeting it was Barnes who was able to come out on top and take the #1 ranking from Stotts.

In 2015 there were three freshmen that won state titles in the state of Iowa, so this matchup already had the drama of two state champions meeting for a big matchup in the Cedar Rapids Jefferson Invite finals. Not only are these two accomplished wrestlers in the state of Iowa, but both have had their share of success on the national circuit as well. In this meeting it was Thomsen that was able to come out on top 3-1 to keep his perfect high school record intact.

We called it the first week of the season that Teske-West would go down as the best match of the season, and more than likely you still agree. It was a matchup of two two-time state champions with West getting the better of Teske early. Not only was Teske able to come back in the match, but he put an exclamation point on it by winning the match by fall.