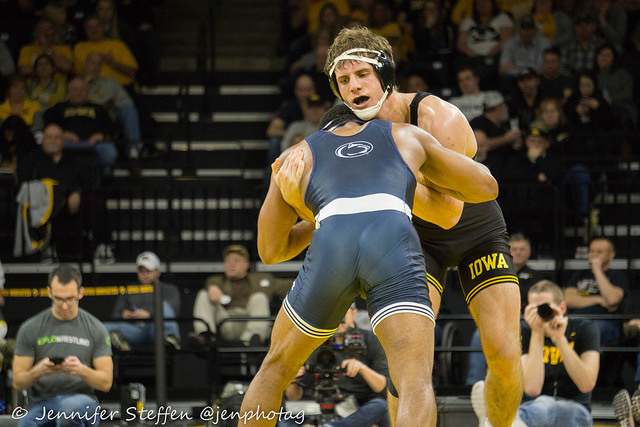 Last Friday was not an easy one for the Hawkeyes, who first learned that sophomore heavyweight Sam Stoll would have to miss the remained of the 2017 season with a torn ACL, and were then defeated 26-11 by Penn State, snapping a 24 conference dual winning streak. It was also the first time the Hawkeyes had lost back-to-back duals since the 2012 season.

With that in mind the Hawkeyes will look to avoid losing three straight duals for what would be the first time in the Tom Brands era when they welcome in Ohio State for a 7:00 PM dual on Friday night. The dual figures to have several individual matchups that could go either way, but not only will Iowa be without their starting heavyweight, Ohio State’s returning NCAA champion Kyle Snyder will also be absent from the dual as he competes overseas at the Ivan Yarygin freestyle tournament in Russia.

When fully healthy, Tom Ryan’s squad can go toe-to-toe with just about every team in the nation, but more often than not the Buckeyes haven’t been able to feature their full lineup. The entire Ohio State lineup features five top five ranked wrestlers, but of that group four have now missed some portion of the season. With Snyder out of the country, the next biggest question is whether or not Bo Jordan, who is tagged as day-to-day will be in the lineup. Considering Ryan has used the junior sparingly, it’s possible he may not make an appearance in this dual.

Keys for an Iowa Victory
1. Clark vs NaTo
2. Sorensen vs M. Jordan
3. Brooks vs Martin

That leads us into our top individual matchups of the dual, and there is probably none bigger than the 133 pound bout between #1 Nathan Tomasello and #4 Cory Clark. Until two weeks ago Clark was the #1 ranked wrestler at this weight, but his loss to Oklahoma State’s Kaid Brock pushed Tomasello into the top spot. A NCAA champion as a freshman at 125 pounds, Tomasello has appeared to figure out the new weight class, which was fully evident after he dismantled Illinois Zane Richards by major decision. This match is not only one of the highlight matches of the dual, but is probably one of the biggest matches in all of Division I wrestling this weekend.

Junior Brandon Sorensen may be coming off back-to-back losses, but his last performance out sent a clear message to his opponents. After failing to find his offense in the Oklahoma State dual against Anthony Collica, Sorensen rebounded by taking down defending NCAA champion Zain Retherford twice in last weekend’s dual. Up to that point it appeared that Retherford has pulled away from the field, but with Sorensen picking up his first ever offensive scores against potentially the best wrestler in the NCAA, Sorensen’s confidence figures to be sky high coming into his matchup with #5 Micah Jordan. The Ohio State wrestler has adjusted well to 149 pounds after wrestling 141 last season, and should push Sorensen in what will be a great match.

The last BIG matchup on paper is the 184 pound bout between #4 Sammy Brooks and #9 Myles Martin. It was over before the match really even started the last time Brooks took the mat, as Penn State’s Bo Nickal caught the Hawkeye in a spladle pinning him in under a minute. Before that match Brooks looked to be one of the bullies of the weight class after he handled Oklahoma State’s Nolan Boyd the week prior. Martin’s jump to 184 hasn’t gone as well as the sophomore would have liked, but still the former NCAA champion is ranked in the top ten and will also likely be one of the top matches to watch in all of Division I wrestling this weekend.

Topher Carton (141) will look to rebound against true freshman Luke Pletcher on Friday night. Pletcher finished higher than Carton at the 2016 Midlands tournament, but Carton currently sits higher in Trackwrestling’s rankings. Carton looked solid against Penn State senior Jimmy Gulibon before faltering in the third period to surrender his lead and the match.

As mentioned, Alex Meyer (174) could be in for a tough test if Buckeye head coach Tom Ryan opts to send out #1 ranked Bo Jordan on Friday, but if not Justin Kresevic has gotten the nod more often than not. Meyer is coming off a thrilling win over former Mark Hall, the #1 ranked recruit in the 2016 class.