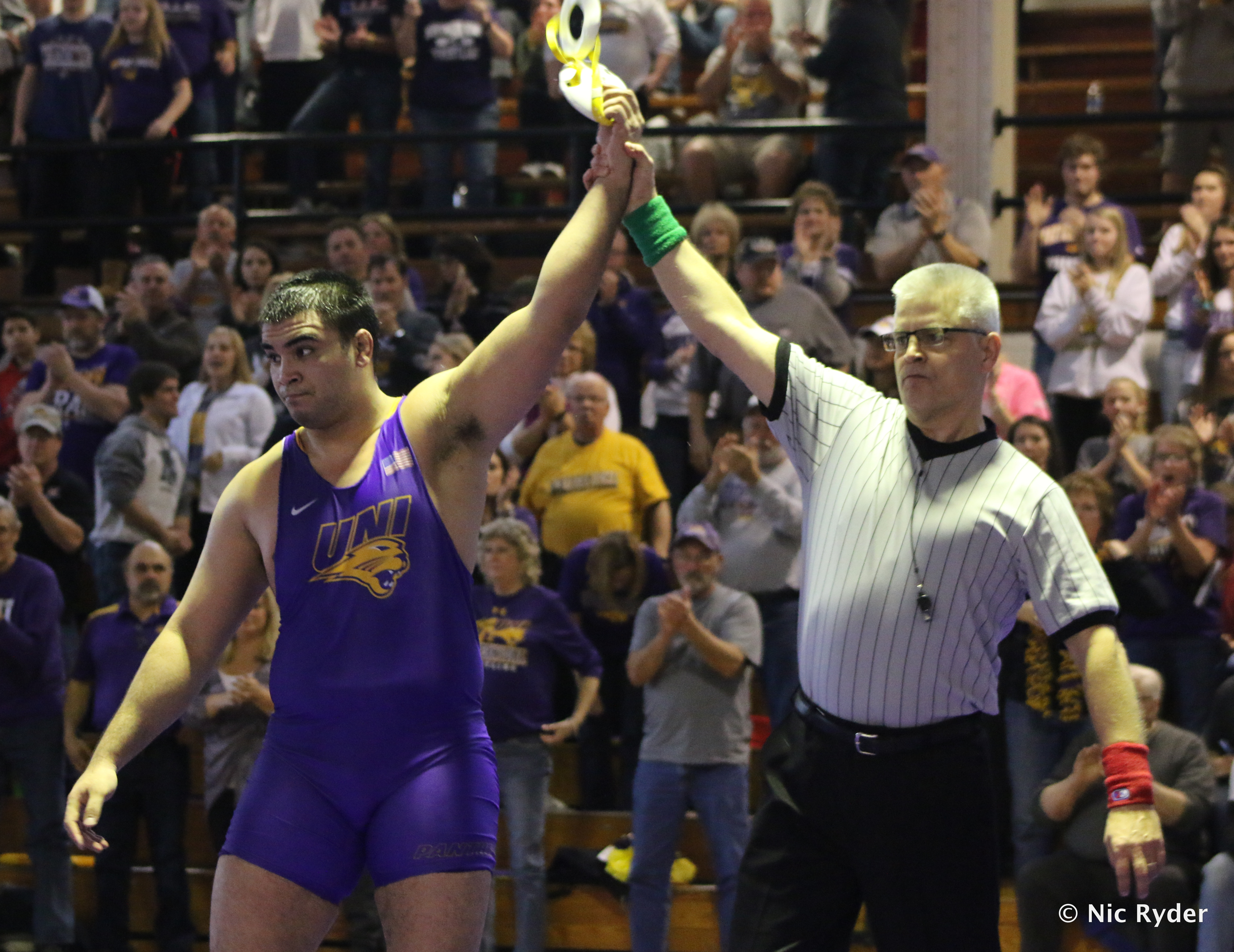 There wasn’t any letdown for Northern Iowa after a big win in Ames two days ago. The Panthers came out and crushed Eastern Michigan 35-4. UNI led 29-0 going into the 141 pound bout, where the Eagles picked up their only win of the day.

“We do have some momentum right now, there’s no doubt that guys, they’re starting to compete like we really want them to,” UNI Head Coach Doug Schwab said. “We were trying to look at every opportunity the same. This still counts the same on your record as any of the other ones.”

There were a couple high points of the dual, but the most important for the Panthers was JJ Everard’s 10-4 win over #17 Gage Hutchison. It was Everard’s second upset of the weekend, after taking down Iowa State’s Quean Smith on Friday.

“I’ve been banged up, a lot of other things, but it feels good to finally start winning,” Everard said after the match. “Just wrestling normal, just want to go out and attack. He’s (Hutchison) just a big thrower, and I don’t really hang out in there, I knew I’d be fine.”

“That’s the best that he’s looked. I really like where he’s at right now,” Schwab said of Everard. “He’s holding himself a little bit different, and I think that’s just kind of indicative of what’s going on up and down the lineup.”

Most of the heavy hitters for UNI came out with pretty dominate performances. Bryce Steiert and Jay Schwarm both had tech falls, Taylor Lujan had a major decision, and Paden Moore and Drew foster had over two minutes of riding time each in decision victories.

The only match that had a favored Panther wrestler in trouble was at 133 pounds. Josh Alber won a squeaker with Armando Torres. Alber racked up over three minutes of riding time in the second period and would need most of that time to hold off Torres, who had the match going to sudden victory before giving up a second stall call. That would tie the match at 4 and riding time would prove the tiebreaker for Alber.

At 141 pounds Kyle Springer won by major decision over Tyler Willers, 16-6, for EMU’s only win of the day. The Eagles would forfeit 149 pounds.

UNI will travel to Ohio University for a dual this Friday night against the Bobcats. They’ll stay in Ohio for a showdown with Kent State on Sunday.