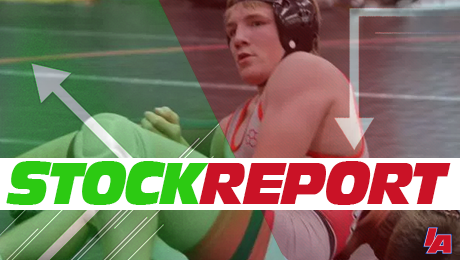 UNI– The #22 ranked Panthers traveled to Central Michigan on Sunday and managed to come away with a dual meet victory over #13 Central Michigan 17-16. The two biggest wins for Northern Iowa came at 133 from Josh Alber and 184 from Drew Foster. Alber defeated Corey Keener 6-2 which was big since Alber dropped both of his matches to the Central Michigan 133lber last year. #15 Drew Foster took out #14 ranked Jordan Ellingwood 3-1 in a slight upset according to rankings for UNI. Bryce Steiert (165), Taylor Lujan (174), and JJ Everard (285) also picked up wins for the Panthers.

Keaton Geerts– Geerts avenged his only loss of the season to 3A #1 ranked Triston Lara of Fort Dodge on Saturday. Geerts was able to best Lara 4-2 to claim the 138lb title at the J-Hawk Invitational in Cedar Rapids. The win helped New Hampton come away with the team title as well since Fort Dodge finished just 6.5 points behind the Chickasaws. The UNI Commit moves to 38-1 on the season. He is the defending 2A 132lb State Champ.

Lance Runyon– Geerts wasn’t the only wrestler in Cedar Rapids on Saturday to reverse a previous defeat and claim a J-Hawk Invitational title. 3A #5 Lance Runyon was able to take out 2A #5 Noah Fye of New Hampton 6-2 in the finals. Runyon managed an 11 point swing between matches as he lost the first meeting 7-0 before Christmas. Runyon also pinned 1A #10 ranked Mason Wickman of Alburnett in the semifinals.

Iowa Hawkeyes– The Cowboys had all the answers for the Hawkeyes on Sunday in Stillwater. Oklahoma State ran away with the meet winning 24-11. Here is a match by match breakdown of what went wrong and also a look at some of the bright spots as well.

Thomas Gilman– Gilman started slow only leading 2-1 after the first and 4-2 after the second period. He did manage to kick it into gear in the third period to pick up that major. There wasn’t anything too alarming to take away from Gilman in this match as #12 ranked Nic Piccininni was only able to get in on Gilman’s legs once throughout the whole match. It still would have been nice to see Gilman come out guns a blazin’ in the first period especially after his colorful comments on the Cowboys in the days leading up to the meet.

Cory Clark– If you are expecting a doomsday breakdown of how Clark dropped this match then you came to the wrong place. Clark couldn’t get the job done against Okie State’s #6 ranked freshman Kaid Brock, but that doesn’t mean he can’t rebound. Clark was in deep multiple times in the first, but he was unable finish on Brock’s rubber legs. Clark managed to come on strong in the third period and almost completed the comeback, but Brock was able to escape one second before Clark could lock up riding time to give him the win. One thing about the match I don’t quite agree with was when Cory got hit for stalling trying to to turn Brock in an Oklahoma Cradle (Merkel, Jawbreaker, or whatever you want to call it). Had he not been hit for stalling from that position, he could have clung on in the top position later in the match. Cory doesn’t appear to be slowed down by the shoulder injury any noticeable amount which should come as the biggest sigh of relief for Hawk fans. Brock is a stud and could very well beat Clark again, but assuming the shoulder holds up, I’d expect a better Cory Clark in March with the added mat time.

Topher Carton– Not a whole lot to say here. Carton was wrestling the defending national champ and managed to make it look respectable. Heil is notorious for wrestling closer matches, but almost always comes out on top. The biggest positive coming out was Topher was able to get to Heil’s legs and secure a takedown at the end of the match.

Brandon Sorensen– One of the most alarming things to take away from this dual was Sorensen’s inability to get to #3 ranked Anthony Collica’s legs from the neutral position. What essentially lost him the match in overtime as well was the fact he couldn’t ride Collica at all. Brandon only managed to hold Collica down for 17 seconds combined in the two 30 second tiebreakers where he was riding. He also had a stall warning to give to collect a couple extra seconds as well.

Michael Kemerer– One of the two bright spots for the Hawkeyes in this dual was Michael Kemerer. With his #2 ranking and the target on his back now, he was able to take out #5 ranked Joe Smith. Kemerer was able to use a takedown and two escapes to collect a 4-3 victory. To top things off he was still attacking late in the match with the lead and almost got another takedown to put the match on ice.

Skyler St. John– With Joey Gunther sitting out, Skyler St. John was tasked with facing the very dangerous Chandler Rodgers. Rodgers caught St. John in a move I’ve never seen work before especially at the college level. Okie State was definitely thinking bonus points here and they got them to basically put the meet out of reach with the exception of some major upsets.

Alex Meyer– Meyer’s shot defense from the neutral position continues to be his kryptonite. #5 Crutchmer was able to get to Meyers legs and finish twice in the first period for a 4-1 deficit. It was just too much for Meyers to over come as he fell 5-2.

Sammy Brooks– With the meet almost out of reach, Brooks managed to give the Hawks a glimmer of hope when he was able to put #4 ranked Nolan Boyd on his back in an inside cradle. Brooks dominated the match and about the only negative was he couldn’t finish the job with the inside cradle, but he still managed an extremely impressive major decision over a top five opponent. Sammy was able to get another four back points as well with his patented two-on-one tilt to rack up 13 points for the match.

Cash Wilcke– Another match where there wasn’t too much to say. Wilcke is just a 184lber wrestling 197. He looked competitive with Weigel for two periods until the Oklahoma State 197lber was able to get on top in the third and work his tilts.

Sam Stoll– It’s no secret at this point that Stoll doesn’t have a whole lot of offense. In a battle of two top 10 opponents, Stoll only managed one offensive point in the form of an escape. His other two points came from stall warnings as he pushed Schafer out of bounds a few times. Stoll appeared to have a slight limp for some of the match, so hopefully that surgically repaired knee is okay.