Iowa Looking for Fourth Straight Win Against the Cowboys 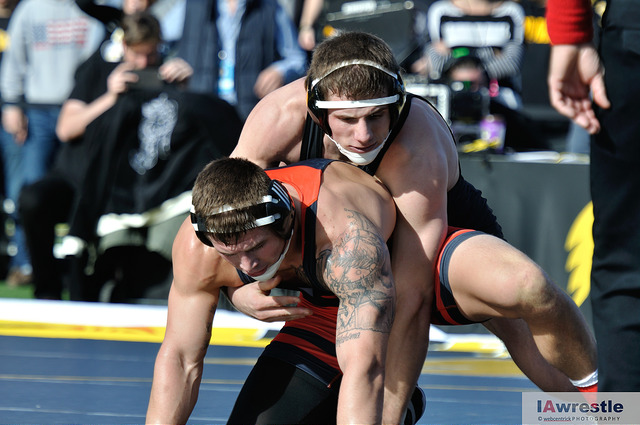 The Iowa Hawkeyes will return to the road this weekend for their annual non-conference meeting with Big 12 powerhouse Oklahoma State in Stillwater, Oklahoma. The Hawks are coming off a pair of big victories in the state of Michigan downing the Wolverines 31-7 last Friday night before sweeping the Michigan State Spartans by a score of 44-0 on Sunday. The duals marked the return of senior Cory Clark coming back into the lineup at 133 pounds, with his first match back being a 2-0 victory against #8 ranked Stevan Micic. Clark will be tossed back into the fire this weekend with #6 ranked Kaid Brock.

Just like every other year, the Iowa-Oklahoma State dual looks to be a brawl on paper as an astounding seven wrestlers will enter Sunday’s contest with an undefeated record with 133 and 149 featuring an undefeated pairing. All ten of John Smith’s Cowboy wrestlers are ranked in the top 25 (versus Iowa’s nine) with five of those wrestlers a consensus top five wrestler (Iowa has four). With Iowa winning the last three dual meetings – including last’s years win in front of over 40,000 fans in Kinnick stadium – Oklahoma State will be geared up to put the Cowboys back on top on their home mat.

Keys for an Iowa Victory
1. Alex Meyer looking to get even with Crutchmer
2. Clark keeping it going
3. Battle of the big men
4 .BONUS: No Bull

In a dual with this many talented wrestlers just about every match will likely come down to just a couple points. It’s fairly easy to discern just why a majority of the matchups are swing matches, though there might not be a bigger one than 174. Unlike most other matches in this dual this is one of two head-to-head matchups coming in where both guys own a win each other (not counting freestyle). Meyer and Crutchmer split their meetings at the Lindenwood Open two seasons ago, and Crutchmer came out on top in a wild 11-10 decision in last year’s dual meeting. There isn’t a ton of separation talent-wise between these two, but as often the story with Meyer, slow starts are his Achilles heel so getting comfortable early is extremely important.

Another big potential match to circle for this weekend will be the 133 bout between Clark and Brock. During Iowa’s weekly meeting with the media Clark told reporters that his shoulder “felt good” and that the he and the staff were exercising caution rather than risking further injury. Regardless of how well Clark is feeling his Sunday meeting with Brock figures to be a battle as it was just over a year ago that the young Cowboy was able to knock off his first #1 ranked wrestler. Clark didn’t show any signs of his shoulder bothering him in either of his matches versus Michigan opponents which means as long as Clark shows up ready to wrestle this match should go to the Hawkeyes. Last weekend we saw Clark show off his patented two on one, Russian arm tie and was tough in the top position — in other words typical Cory Clark. Even though he is solid in all three positions, expect Oklahoma State to circle this matchup as one they would like to steal.

Draw a weight out of a hat and one could probably make an argument that it’s one of the dual’s most important matches, but the final match we highlight will be at heavyweight where sophomore #9 Sam Stoll will face off with #4 Preston Weigel. The Oklahoma State wrestler began his career as a 197 pounder for the Cowboys and has now grown into a full blown giant slaying heavyweight. Weigel was never an elite wrestler at 197, but since the move up he has defeated a bevy of the weight’s top wrestlers to reach the top five in the rankings. Everyone can probably guess Stoll’s game plan to dig in underhooks and pressure Weigel into a position where he either makes a mistake or has to back away to avoid being thrown. Out of all the matches where Iowa is the underdog in the rankings, this match is probably the best chance to pull the upset.

It was reported yesterday, but we’ll say it  again, Tom Brands publicly stated that true freshman Alex Marinelli will be keeping the redshirt on, so Tom Brands will be rolling with either Joey Gunther or Skyler St. John on Sunday. Gunther has slowly worked his way into Trackwrestling’s ranking this season, but figures to have a tough matchup with Jordan Rodgers. With St. John also listed on the probables, it’s worth monitoring if Gunther is a little dinged up and unable to take the mat.