Iowa vs Michigan Play by Play 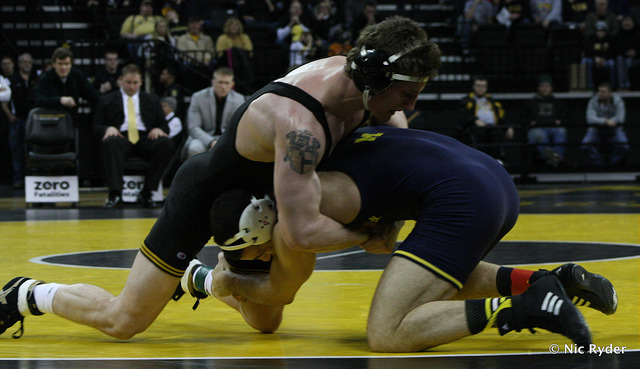 Hit me up with questions on Twitter @rossbchek or below in the comments below.

Projected matches (Will go bold once the match begins)

1st: Gilman snatch single off the whistle to score a takedown and cuts Assad right away.  Assad tries a shot and Gilman snaps him down to a front head lock and works back up to his feet. Gilman with another head inside single and finish to go up 4-1. Cuts Assad, 4-2. Gilman on another single that he brings up to his feet trips for a takedown and other release. Snaps Assad and Assad about bounces his head off the mat, Gilman spins around for 2. Release by Gilman, another inside single finish for his fifth takedown. Trying to work on top with just over :30 to go, loses his arm bar and they go out of bounds. Gilman finishes the rideout, 10-4 lead.

2nd: Gilman chooses down works up to his feet and is out in :06. Gilman snaps to a front headlock but they head out of bounds. Assad shoots in and Gilman has him extended, grabs the ankle and spins around for 2. Gilman cuts. Gets in on another single for yet another takedown. rides out to end the period. 15-5 lead.

3rd: Assad starts down, Gilman goes optional start and cuts Assad. Gilman drops on yet another single that he finishes on the edge of the mat. Assad shoots in Gilman fights out in the crackdown position, spins around for 2.

1st: Clark comes out looking to work the head, go to his two on one arm tie vs Micic, not able to get anything from the first minute. Micic in on a single midway thru the first, now trying to come out the back door, Clark has a body lock fighting it off. Micic still working, now stalemated. Under a minute left, Clark in the front headlock with Micic, stalemated. First ends scoreless.

2nd: Micic picks down to start. Clark with a tightwaist ride, now throws a leg in and is trying to flatten Micic out — stalemated. 1:18 left, Micic trying to get hand control Clark shelfs Micic’s leg on his knee when he was trying to stand up and pressures Micic back onto the mat. Micic reaches and grabs Clark’s ankle and he comes out on top of Clark and Clark goes to his back able to roll off it. Ref doesn’t reward a reversal or NF, says Clark maintained control the whole time. Looking at the replay, Clark managed to get into a leg pass situation so ref never awards a reversal — not enough seperation. Clark finishes with a 2:00 minute rideout.

3rd: Clark takes down, up to his feet, Micic cuts him after a one count. :05 riding time surrendered. Micic takes a shot, Clark flattens him out and tries to go behind, Micic able to fight back to his feet for no score. Clark goes to his two on one and slips down to a single leg, trying to pick the ankle up, now lifts it looking to trip, time expires. Clark wins

1st: Feeling each other out for the first 1:15, Profaci tries a shot that Carton fights off easily. Profaci tries another shot and catches Carton flat footed drives through for a takedown. Profaci drops to a leg gets five counted so is now warned for stalling. :30 left, Carton up off the whistle and is out. :19 RT against him. Carton in on a single and scores with under:15 to end the period. 3-2 lead.

2nd: Carton starts down, elevator off the whistle standing granby, Profaci follows out of bounds, no escape. On the restart, Carton Goes to a standup, tries another granby, and gets seperation for the escape. :19 RT against him after all that. Looked like Profaci was thinking about a super duck, but it wasn’t there. No score the rest of the period. 4-2 lead Carton.

1st: Stall warning on Hall early for backing out of bounds with Sorensen. Sorensen coming with heavy pressure on the edge, Hall hits a duck under and looking to score, but Sorensen gets his hips back and they go out of bounds, no score. Sorensen in on a single, trying to come out the back door, Hall managed to get his leg back and scramble out. Brands challenging a head scissors on Sorensen, they award a point to Iowa on the violation. They are back on their feet, Brands was fired up about the violation. Sorensen just not able to penetrate through for a leg attack.  1-0 lead for Sorensen.

2nd: Sorensen will start down, is up in out in under :10.Shot attempt by Hall, Sorensen comes with heavy pressure and Hall backs out and hit with stalling, another point for Sorensen. Sorensen starting to pick up his shot frequency in on a leg, trying to come out the back, drops to a hip and comes around for 2. 5-0 lead for Sorensen.

3rd: Hall starts down, Sorensen starts in his spiral ride to keep Hall on the mat. Roll attempt by Hall Sorensen riding tough looking for a suck back and gets 2 NF. He lets Hall up to work for the major. Half shots traded, Sorensen in another attempt out the back door for another takedown with :37 to go.

1st: Kemerer in on the ankle right away, Muprhy grabs Kemerer’s leg and able to come out on top for 2. Murphy looking tough in the leg pass position. Kemerer out for  an escape, :14 RT against Kem. Kemerer in on a shot, brings it up to his chest, tries a trip and drops Murphy’s leg so no score. Murphy changes level and reaches for the leg, Kemerer steps out of the way. Period ends Kem down 2-1

2nd: Kemerer starts down and gets a quick escape, :20 RT against him. Kemerer tries a sweep single, not there. Kemerer firing off a barrage of shots, not able to find purchase. Now Kemerer has the leg, tries to come up with it and Murphy kicks free. Murphy comes with a reshot and gets extended and unable to score off it. Tied up 2-2.

3rd: Murphy starts down, optional start by Kemerer, 3-2 lead for Murphy. Murphy comes with a shot, trying to come out the back door, Kemerer passes the leg and scores a takedown of his own with 1:20 to go. Stall warning on Murphy for purposely taking off his headgear. Kemerer riding tough. Stall warning on Murphy for not working up, point Kemerer, Kemerer also warned for stalling. Kemerer finishes the rideout.

1st: Masas scored within :08, working on top to start, Gunther comes to his feet and Massa cuts. Massa in on a single and scores on another takedown in the first minute. Cuts Gunther. Snap down by Massa to score his third takedown on the edge of the mat. Cuts Gunther. Massa starts with a double, switches to a single to score, cuts Gunther. Another straight on double switches into a body lock bear hug, now drops back to grab the far ankle to drive through for a takedown. Leads 10-4 after 1.

2nd: Massa starts down and is up and out. Warning on Gunther. Massa in on a single and scores another takedown. Cuts Gunther. Massa in on another single, switches to another bear hug situation that Gunther has to bail out and another Massa takedown with Gunther not in good position. Massa looking to hit near fall of a roll thru, no points. 15-5 lead for Massa.

3rd: Gunther starts down up to his feet and out. straight on double Gunther fights out of, Massa keeps coming and able to get a single, but they go off the mat. Not much action after that..

1st: Amine working a two on one arm tie off the whistle, hits a sweep single and scores a takedown. Throws both legs in and Meyer is flattened out. Meyer able to get to his feet and is now out for an escape. Amine back in on a single trying to come out the back door, Meyer grabs an ankle, and it’s stalemated. Meyer trails 2-1, 1:02 RT against him.

2nd: Meyer starts down and gets out, 1:24 RT against Meyer. Amine with a shot trying to come out the back door, Meyer grabs an ankle and now trying get his legs back, but secures the hips for a takedown. Locked hands on Amine, escape Meyer tied 4-4. Shot Meyer, reshot Amine, Meyer looking for a leg pass, Amine picks the leg up and tries to trip, Meyer goes for the leg pass again. Scrambling here — no score. Tied 4-4

3rd: Amine starts down, Meyer flattens Amine out immediately, Amine to his base tries a roll through but Meyer stays with. Meyer chopping arms, tries a half and gets too high and gives up a reversal, escape Meyer. Amine in on another single, RT no longer a factor. Amine in on another shot, Meyer trying to pass the leg, and has a cradle, but they aren’t awarding the takedown, Amine still had a leg. Brands talking with the official here. no review.

1st: Slide by from Brooks has him up early 2-0, cuts Battaglia after :08. Headlock from Brooks as he racks up a takedown and 4 NF, but loses the hold while going for the fall. 8-1 lead for Brooks. Off a restart, Caution Battaglia, followed by caution Brooks. Battaglia up to his feet for the escape. Brooks now in a double unders, shrugs by for another takedown with just under a minute to go. Looks for a 3/4 nelson. Escape Battaglia. Brooks with a bear hug, Battaglia bails out and gives up a takedown with under :20. 12-3 lead for Brooks.

2nd: Battaglia starts down, Brooks looking for a tilt, lets Battaglia now. Shot by Battaglia, Brooks breaks the hands and trying to come around and does for 2 more. Trying to dig the arm out has it across the back, now loses the hold. Cheap tilt for Brooks for 4 NF. 18-4 Brooks lead.

3rd: They start on their feet, Brooks secures a takedown for the win

1st: Nothing after the first minute. No action after 2 mins. Pulling heads, clearing ties. Striggow on a single late. Ends scoreless.

2nd: Striggow starts down, both guys have been warned for stalling in the first that I missed.  I must’ve dozed off. Striggow up to his feet and gets the escape. Period ends 1-0 Striggow, :21 RT for Wilcke.

3rd: Wilcke starts down, caution Michigan. Wilcke up to his feet and is returned out of bounds. Roll attempt off the restart, now Wilcke to his feet and is out. :08 RT for Striggow. Wilcke in on a single, tries to come out the back door and finally comes around for the takedown with :35 to go. Striggow to his base and up to his feet, trying to break the hands, WIlcke hasd to let him go. Striggow coming in with heavy pressure, Wilcke hits a whip over for another takedown.

1st: Perry tries a shot attempt, Stoll in a front head lock reaches for a leg near the edge as they go out. Stoll backs Perry out of bounds and Perry is warned for stalling. Stoll with heavy pressure, Looking for a takedown, Perry rolls through and it appears he got the takedown on Stoll with 1:16 to go. Refs say they were out of bounds, no takedown was ever awarded.  Stoll comes with a body lock grabs the leg and trips Perry to his back for six points. Gets the fall.