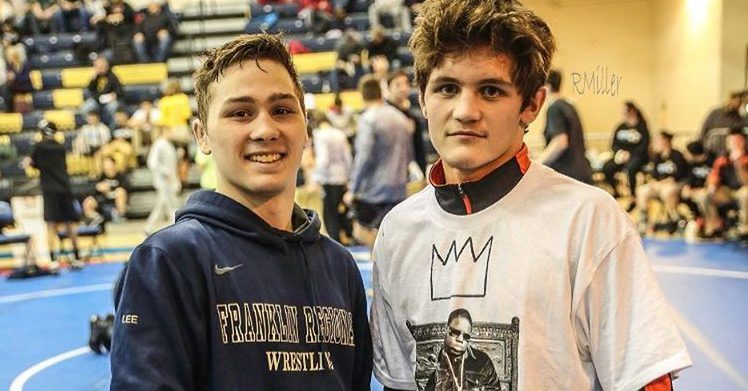 It was a big weekend at Canon-McMillan where in the 50th edition of the Powerade tournament we saw Hawkeye recruits Gavin Teasdale (Jefferson Morgan, PA) and Spencer Lee (Franklin Regional) each pick up the third career Powerade titles at 120 and 126 pounds respectively. It was a good tournament for Cyclone fans as well, with future Iowa State wrestler Jarod Verkleeren winning the 145 pound crown.

For Teasdale it is the third year in a row Teasdale comes out on top of the Powerade tournament and also keeps his career undefeated streak alive. Teasdale opened his tournament with a bye, fall, and technical fall to reach the quarterfinals. After that he slowed, but still won his all three of his final matches by at least six points. His big meeting with top five ranked Beau Bartlett (Wyoming Seminary, PA) never came to be, but Teasdale did manage to down Super 32 medalist Logan Macri 10-4 in the finals for his big win. The plan for Teasdale is to now head to 126 pounds for the remainder of the season.

After missing the 2015 Powerade tournament due to his shoulder injury, Lee came back with a vengeance in 2016 winning all five of his matches by bonus including opening his tournament with two straight falls in under a minute. Lee then added a pair of technical falls and a 9-0 decision in the finals to win title #3.

Verkleeren’s path to the title required a little more effort, but he can officially check the Powerade tournament off his bucket list of tournaments to win. Verkleeren started out with three consecutive major decision wins and was close to a fourth, but only won 10-4 in his semifinals bout. Frankie Gissendanner (Penfield, NY) gave Verkleeren his only struggle of the day, as Verkleeren would need to go to the tiebreaks to win his final match.