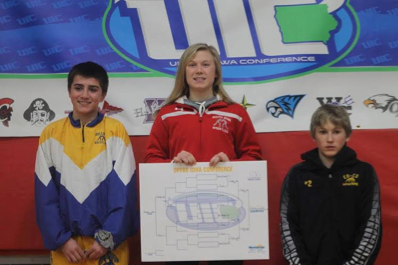 In last year’s preview there were 37 girls registered to wrestle in Iowa on their high school teams. Within a few weeks of the start of the season we saw those numbers increase significantly to 66. In light of that, we waited a couple extra weeks this year to bring out our girls high school preview and hopefully include the majority of those wrestlers who will be competing this season.

Iowa’s female wrestlers are growing in numbers at an impressive rate. As of this week, there are 85 wrestlers registered, which is a 28.8% increase over last year’s 66. It is also important to note that there is a female registered to wrestle in 23 out of the 24 districts covering 1A, 2A & 3A throughout the state of Iowa. Keep in mind that there are 6 additional wrestlers who are listed on the rosters but have not yet weight certified and there are always additional wrestlers who are late sign ups or have not been entered in the roster data. At this rate of growth, what used to be a handful of female wrestlers throughout the state will soon be well over 100 and growing.

Iowa does not currently sanction girls wrestling at the high school level, requiring those females interested in wrestling to do so by competing on the boys team at their high school. We have reached a point in Iowa where sanctioning girls wrestling should be a major topic of discussion at the Iowa High School Athletic Association (IHSAA) and the Iowa Girls High School Athletic Union (IGHSAU). The participation numbers, rate of growth, and active support among coaches, officials, and administrators point to the need for sanctioning. The assumption can also be made that the numbers would increase exponentially given the opportunity for girls to wrestle other girls. For those who have not supported girls wrestling because they have competed against the boys, here is your opportunity to support the girls by supporting sanctioning of girls wrestling in Iowa. There are a lot of people working behind the scenes to make sanctioning a reality and we will include information on the progress in future updates.

Now on to the preview!

We have listed the wrestlers in their respective classes and districts and have included their grade level and weight class. Keep in mind that these are the certified weights and many wrestlers will compete at different weights as the season gets underway.

Of the 85 wrestlers included, the class and grade breakdowns are:

As mentioned above, additional wrestlers will likely be added in the coming weeks. If you know of a female high school wrestler who is not included, please email their information to: matt@femaleelitewrestling.org

The first week of competition is at hand with weekend tournaments taking place throughout the state. We look forward to bringing you the results in our next recap!