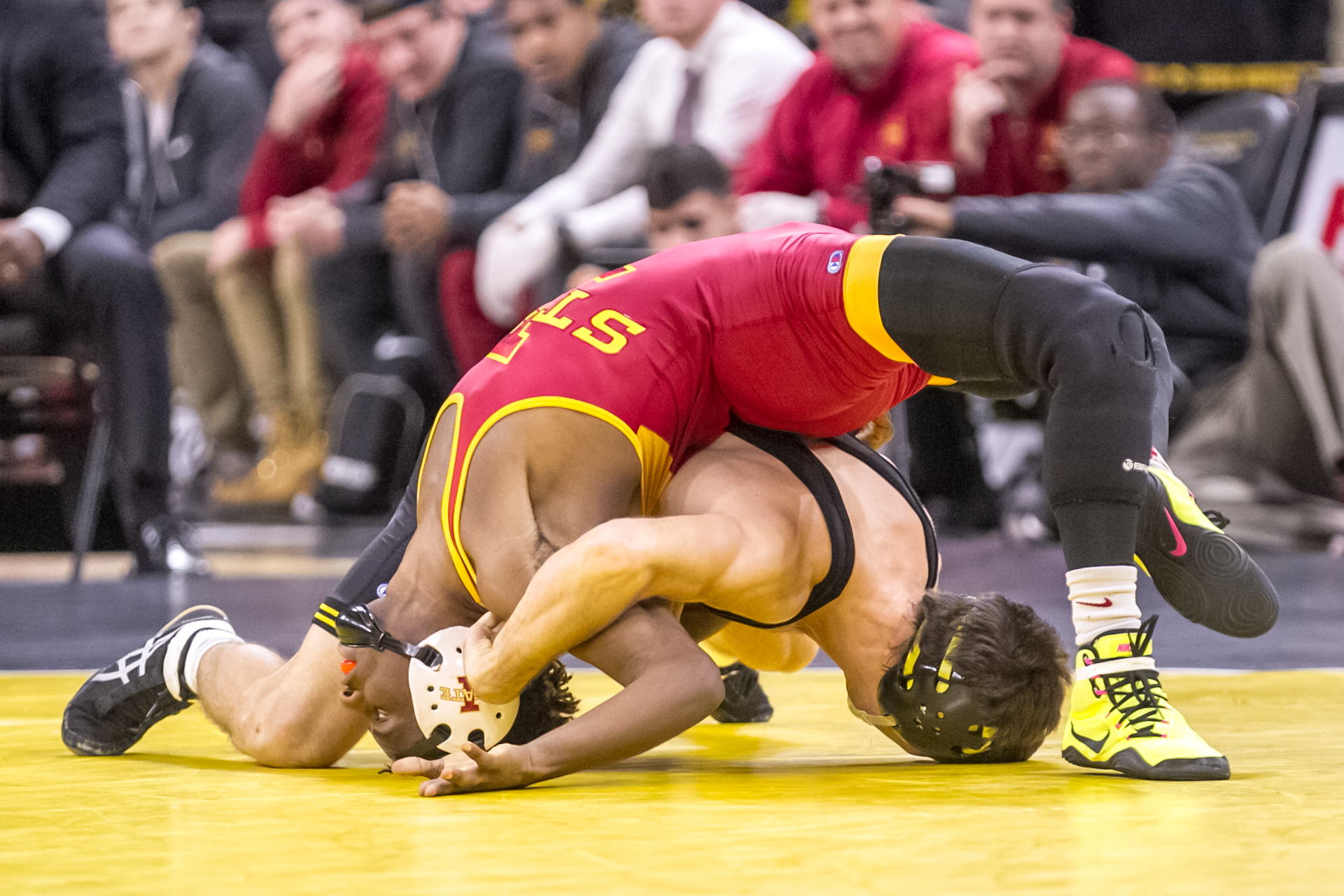 Gilman and Brooks won by technical fall, and Sorensen earned his team-high fifth major decision to push Iowa past the Cyclones for the 13th straight time.

The Hawkeyes (5-0, 1-0) won seven-of-10 bouts overall and held a 19-10 advantage in takedowns, but won four decisions by a combined seven points.

“We were in some holes and the good thing is we bailed ourselves out of some holes,” said UI head coach Tom Brands. “I will say this, I heard that John Smith said after his dual with Oklahoma, and it’s pretty true here, we’re not just trying to beat Iowa State, we’re trying to close a gap on the best teams in the country. That was a close dual even though the score was lopsided. There were some tough situations that we did not wrestle through and that is a concern, big time.”

Iowa State opened the dual with a win at 285, where Quean Smith defeated redshirt freshman Steven Holloway, 10-5. Holloway, a 197-pounder in 2015-16, was wrestling his eighth match at heavyweight in place of Iowa’s fifth-ranked Sam Stoll.

Gilman answered the Cyclones’ win with a 19-4 technical fall at 125, scoring six takedowns and four nearfall points before the match was terminated.  Gilman, the nation’s top-ranked 125-pounder, led 16-4 after two periods and was credited two points at the third-period break when No. 18 Markus Simmons was dinged twice for stalling. An early third-period escape terminated the match at the 5:09 mark.

“I feel like I syphoned his gas into my gas tank when the guy was sitting there stalling,” Gilman said. “It fires me up a little bit. These guys come here and say they want to wrestle, but do they want to wrestle? I don’t know. I take them to where they’re uncomfortable and to deep waters.”

Gilman’s win gave Iowa a 5-3 team lead, but Iowa State swung back on top when 10th-ranked Earl Hall won 5-3 against Iowa’s Phillip Laux, who for the second straight week filled in for top-ranked Cory Clark.

The Cyclones led 6-5 when redshirt senior Topher Carton took the mat for the first time in the Cy-Hawk Series. Carton surrendered a late takedown to John Meeks in the opening period and trailed 3-0 in the second before finishing strong and scoring seven of the final eight points. He was credited with a technical point, a caution point, and tied the match with an escape 10 seconds into the third period. He finished the final frame with a pair of takedowns in to win 7-4 and give Iowa an 8-6 team lead and start a streak of six straight Hawkeye wins.

“Looking back at the match I probably could have set the tide a little bit more in the first period,” Carton said. “The second period I got in on a shot and didn’t finish it, that was the point where I felt I was getting more to my offense. I just have to go out and pull the trigger.”

Sorensen followed with a major decision at 149, and Cy-Hawk rookies Michael Kemerer and Joey Gunther picked up a pair of one-point decisions at 157 and 165, respectively.

“(Our) guys need to be thinking about scoring points when they’re out there, not other things,” Brands said. “Guys don’t fall down when you blow on them. They fall down when you put them down, and if they don’t go down right away, it’s multiple times. There are technical things and skills. Really when they’re out there it’s about repeated, repeated, repeated. And we didn’t do that. But we did win some close matches.”

Alex Meyer scored on an escape and takedown in the third period to defeated No. 10 Lelund Weatherspoon at 174, 5-3, and Brooks finished his match and the Hawkeyes’ scoring with four nearfall points in the final seconds of his 19-3 win at 184 pounds. The Cyclones ended the dual with a 4-3 win at 197.

The Hawkeyes return to the mat Dec. 29-30 at the Midlands Championships in Evanston, Illinois.

NOTES: Attendance was 10,046… Iowa has won 13 in a row against Iowa State… With the win, Iowa retained possession of the Dan Gable traveling trophy for the seventh time since the trophy’s inception in 2010… Iowa leads Iowa State 13-6 in the 2016-17 Iowa Corn Cy-Hawk Series… Brands improved to 12-0 against Iowa State… Gilman is 8-0 this year with five pins and three technical falls… Holloway, Laux, Carton, Kemerer, Gunther, and Wilcke made their Cy-Hawk Series debuts.