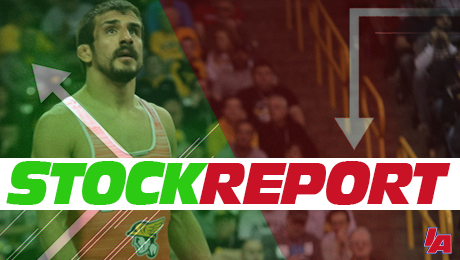 Drew Foster (UNI)- Foster picked up a convincing 6-1 victory over #9 Jack Dechow of Old Dominion on Sunday. Dechow is an All-American finishing fourth three years ago and going 2-2 each of the last two years at nationals. The win moves the former Mediapolis prep to 6-0 on the season.

Bryce Steiert (UNI)- Steiert picked up 3-2 decision over Old Dominion’s Seldon Wright. Wright is currently ranked #14 at 165lbs. Add this to Steiert’s major decision he picked up over Virginia Tech last week and the former Waverly-Shell Rock prep has a nice start to his season.

Iowa’s ability to rack up nearfall- Iowa went an entire meet on Sunday without scoring a single nearfall point. Only once in the 10 matches did the ref even begin counting, when Cory Clark got a one count as the period ended. The game plan going into the meet might have been just to rack up as many takedowns as possible, but Iowa will need as many bonus points as possible in St. Louis if they want to claim the title.

Iowa State’s lineup- Injures and potential weight issues took a toll on the Cyclones lineup as they split a pair of duals this weekend. ISU forfeited 125 on Saturday and they were forced to use some backups due to injures both days. There is no sense in forcing guys to wrestle who are a little dinged up this early in the season, but the Cyclones were surely hoping for a weekend dual sweep regardless and came up just a little short.

Gabe Moreno (ISU)- It was a rough weekend for Moreno, dropping a pair of matches. Iowa State’s two-time NCAA qualifier dropped a major decision to Northern Colorado’s Timmy Box 13-2 on Saturday and was pinned by returning NCAA runner-up Bryce Meredith of Wyoming on Sunday.