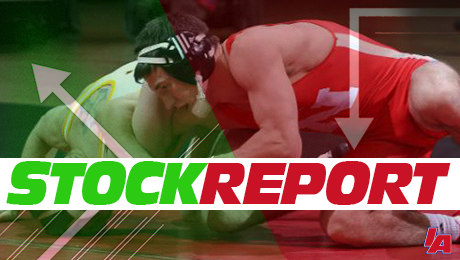 Colton McCrystal– Hopefully everyone bought in on McCrystal early because his stock is sky high right now. A week ago the Sergeant Bluff-Luton native won himself a Harold Nichols title. He followed that up this weekend by picking up two dual meet wins. One of those wins being a 6-2 decision over returning NCAA runner up Bryce Meredith of Wyoming. Meredith is currently ranked #4 in the country by Intermat. McCrystal is ranked #15

Kyle Springer– This former Davenport Assumption prep had himself a day yesterday at the Keystone Classic. He took home the title at 141 and in doing so he knocked out Jimmy Gulibon of Penn State in the second round. Gulibon is currently ranked #11 by Intermat. In addition to beating Gulibon he picked up three more regular decisions to take home first.

UNI– “How can UNI be in this section, they lost by 17 at home?” Usually we don’t chalk up moral victories around here, but you have to be happy with how well the #22 ranked Panthers competed with a Virginia Tech team that is currently ranked #6 in the country. Four of UNI’s youngsters kept the score within two takedowns of top 10 ranked opponents. Throw in a fall by Josh Albers at 133 and it was a pretty strong showing by the Panthers.

Iowa’s early season schedule– We are two weeks into the season and Iowa’s projected starters are 52-0 through two events. Iowa steamrolled Cornell College and Iowa Central by a combine score of 100-0 in front of a crowd that was almost out numbered by event staff and media on Friday. Could this be the end of the Iowa City Duals or will the Hawks keep this event on their schedule?

Dylan Peters knees– Peters had another set back on Friday with his knee. Hopefully Peters just suffered a minor tweak to his knee and wont have any issues going forward. The only thing we know for sure is how tough Dylan Peters is. Any guy who can place at the NCAA tournament without an ACL is one tough SOB.

Wrestlers during Thanksgiving– It’s all wrestlers least favorite holiday when they are cutting weight and their most favorite when they aren’t. There is nothing worse than sitting around watching others eat when you know you can’t. Good luck to all of you in that position this week.