Iowa vs Purdue play by play (Joined in progress) 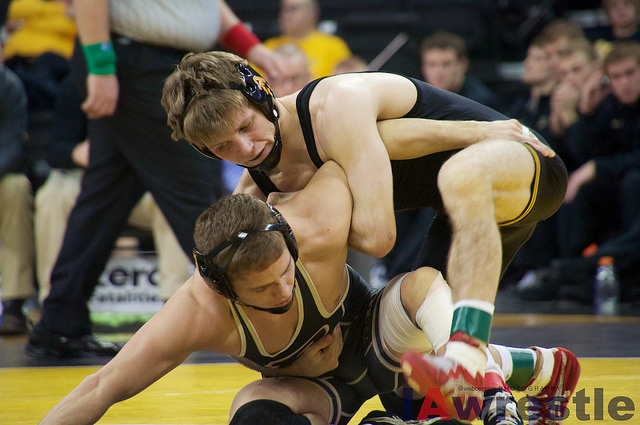 Match Notes: Sam Stoll is listed as probable and could make his season debut at heavyweight today.

3rd: Gunther starts down and gets an escape to take a 3-2 lead. Gunther in the underhook poisition, shot attempt by Lydy, reshot by Gunther and finishes the takedown. Lydy to his feet, but nice mat return by Gunther to remain on top. Roll attempt by Lydy off a restart and gets his escape. RT not a factor. Gunther unable to score on double attempt, Snap and go behind for Gunther on the edge and Gunther locks up a cradle to get another takedown. Escape for Lydy to end it.

1st: Couple half attempts for Meyer, but hasn’t taken a real shot. Working his two on one tie. Meyer working a front headlock, head inside single attempt for Meyer, trying to come out the back door and gets the takedown with :25 left in the period.

2nd: Meyer starts down, comes up to a knee breaks the hands Andreotti switches to a leg and Meyer gets a reversal. Meyer cuts Andreotti, and gets a takedown. Another cut and takedown for Meyer he is up 8-2 with :30 left. Meyer trying to cut Andreotti but he has Meyer’s leg locked up. They call stalemate. Optional start and cut by Meyer. Shot by Andreotti, Meyer able to add a late period takedown, up 10-3 after two.

1st: Brooks comes out in a double unders looking for big points. Scores a takedown off a side body lock.Lynde, now Brooks scores off an underhook foot sweep. Brooks riding tough with a deep waist, now cuts Lynde and they are up on their feet with just over a minute left. Brooks loving the underhooks as he goes to them again, Lynde trying to back out to clear, Lynde tries a shot, Brooks fights it off. Brooks jacks up Lynde with double unders unable to score with short time. 4-2 lead.

2nd: Switch and escape for Brooks to start the period and and snap go behind for a takedown, comes around to the front and cuts Lynde. Brooks takes a single leg attempt trying to come out the back and does for another takedown. Another intentional release by Brooks Snap by Brooks, Lynde comes in on a shot that gets stalemated. Double switches to the single for a takedown. Stall warning on Lynde, 11-4 after the period.

3rd: Lynde starts down, Brooks cuts him and a quick takedown after the release. Brooks cuts again going double unders and able to score again on the edge by horsing Lynde over. Brooks with an intentional release on the restart Brooks tries a shot and gets takedown by Lynde. Trying to over power him and got caught. Brooks up to his feet and out. Adds another takedown late in the match to win.

1st: Wilcke with a sweep single takedown for a score. Brunner kicks out quickly for an escape. Straight on double attempt by Wilcke, but Brunner able to counter out, now back in on a firemans shot and they go out of bounds before he can score. Period ends 2-1 for Wilcke

2nd: Wilcke starts down trying to stand up, but Brunner has a leg in and its stalemated. Wilcke on a restart doesn’t come up right away, Brunner puts the other leg in and Wilcke stands up and is called stalemate. Wilcke up off the whistle, but mat return Brunner and Wilcke is back on the mat. Brunner sticks the leg in trying to flatten Wilcke out. Now Wilcke does belly out and he rides Wilcke the full period.

3rd: Brunner elects down, gets up to his feet and Wilcke has to cut him, Brunner has the lead with RT. Wilcke picks up a takedown off a duck under and Brunner is out quickly, 4-3 score for Wilcke. Brunner locks up RT. Short time left in the match, Brunner comes ankle pick and Wilcke manages to get out of the hold and scores a takedown of his own to win.

1st: Kral is a small HWT too so both guys look pretty evenly matched physically. Both guys working the collar ties, but not a lot of action in terms of shot attempts. Correction, Holloway gives up a point for hand in the face, and period ends 1-0.

3rd: Holloway takes down to start, Kral puts the leg in tries to turk Holloway over. Holloway flattened out, got his head on the mat. Kral finishes the rideout and picks up the RT point