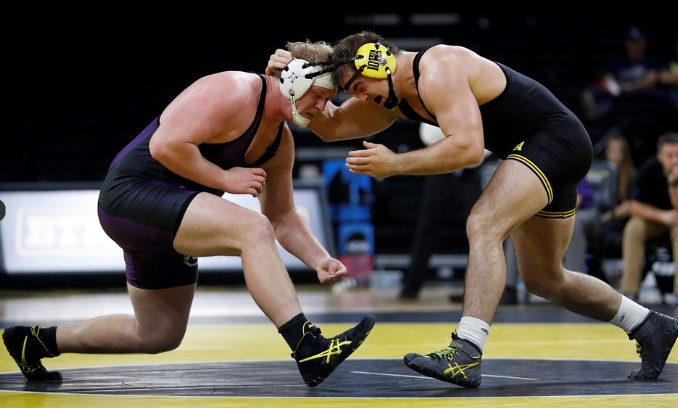 The Iowa Hawkeyes open their conference slate by heading on the road to take on Purdue, which is led by former Hawkeye Tony Ersland. Last year when the two teams met in Iowa City the Hawkeyes came out on top with a 39-4 victory, with seniors Brody Grothus and Edwin Cooper Jr both scoring upsets.

Purdue has done some mixing and matching with their lineup, shifting guys around the lineup through the early parts of the season. So far it looks like Ben Thornton (125), Kyle Ayersman (141), Alex Griffin (157), and Tyler Kral (285) are set as starters, but Ersland has bumped guys like Peter Andreotti (165/174), Tanner Lynde (184/197), and used both Luke Welch and Cody Pae at 133.

Thomas Gilman (125) and Cory Clark (133) could continue their bonus streaks as they won by technical fall and major decision against their projected opponents in last year’s dual meeting. Gilman is a perfect 5-0 with five pins on the year.

Brands has stressed the importance of guys being healthy this season, and so far we know that expected 141 contender Vince Turk will miss significant time this season due to injury which means Topher Carton is officially in the drivers seat to control this spot all season. Brands commented that they were “being smart” by holding Sammy Brooks (184) out of the lineup in the Iowa City Duals. Hopefully it is just an injury/tweak where giving Brooks the week off of live competition is all he needed to be ready to go.

If anyone not named Alex Marinelli is going to win the 165 spot in the lineup, it looks like Joey Gunther after his strong showing at the Iowa City Duals where he earned a technical fall at 165 vs Iowa Central, then bumped to 174 and got a decision against Cornell College veteran Michael Maksimovic. Posting a big win against Purdue could go a long way in upping his stock. In addition to Gunther being victorious in his Carver-Hawkeye debut Michael Kemerer (157), Cash Wilcke (197), and Steven Holloway (285) all began their careers with home wins as well and look to make their first road dual start for the Hawkeyes.

Chirs Cuellar of the Des Moines Register hinted that the return of heavyweight starter Sam Stoll “seems close” which at the very least could suggest the Hawkeyes could get him back in time for the rivalry dual with Iowa State next month. Stoll has missed the start of this season due to a knee injury suffered at the National Duals last season and has been recovering all off-season. In the meantime Steven Holloway has served as the heavyweight, but Brands has already commented that the freshman plans cut back down to 197 once Stoll returns.

How the dual breaks down:

As stated above, Ersland has done some lineup shuffling so far so this is a best approximate guess for what the dual will look like Sunday. Wrestle Stat’s prediction engine only gets better as the season goes on – this is due to the computer gathering more data of recent results. The three results that standout are at 165 Gunther picking up a major would be a big win for the Hawks. At 197 and 285 the Hawkeye freshmen are relatively unknown with both being at new weights those matches could potentially go in Purdue’s favor.