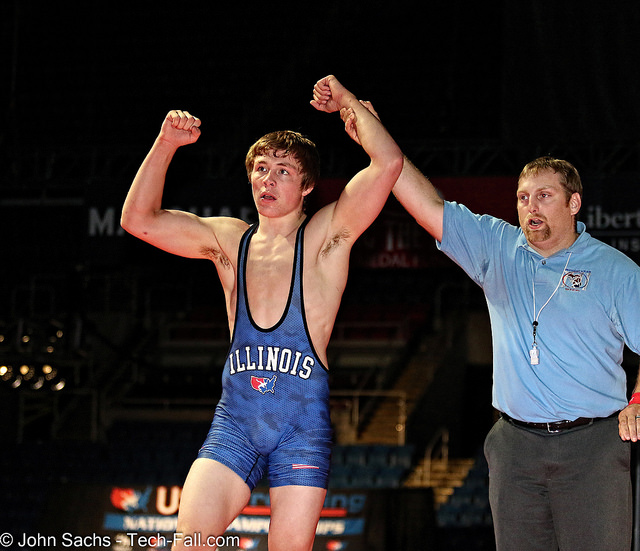 Yesterday was a big day for the Iowa wrestling program when they landed the nation’s #8 overall recruit in the class of 2017, Jacob Warner. A product of Washington High School in Illinois, Warner was a highly sought after prospect for many of college wrestling’s elite teams. We caught up with Warner to talk about his decision to commit to Iowa.

“There was multiple reasons,” Warner told IAwresle on why he committed to Iowa, “I really like the tradition at Iowa. There is no other school in the country that has that. It is such an honor to go wrestle for a school like that and continue the tradition and hopefully even do better.

“(Another reason was) all the guys on the team, they are all great dudes. I thought I fit in well and got along with everybody. They are the type of guys I feel like I surround myself here at Washington, so it’s a good transition. They are the type of guys that when it’s time to work they will put their work boots on and when it’s time to go to business, they’ll go to business. I couldn’t go wrong with that.”

In addition to being pursued by Iowa, Warner also had offers from Arizona State, Minnesota, Ohio State, and Purdue. In the end Iowa just felt like home to Warner which is what led him to picking the Hawkeyes over the other major programs.

“It felt right,” Warner said on choosing Iowa over his other options, “I had a great time on my Iowa visit. I went to the other places I loved them too. Coach (Tom) Ryan and Zeke Jones, they are all great guys and great programs, respectful programs, but Iowa just stuck out to me. It felt like home. It felt like I needed to be there.”

Warner liked what he saw in the wrestlers currently in the room and the incoming recruits. He saw a common goal with all of those wrestlers, “In my eyes I want to be the best in the world. I want to be the best I can be and I feel like I can do that at Iowa. I feel like they can develop me the way I want to be. The tradition is there and with the teammates I am going to have, Spencer Lee, Alex Marinelli, Michael Kemerer, Gavin Teasdale, and Max Murin, they all have the same goals as me. I think we are going to be in that title hunt and I think that is a goal of ours. There is no better people that I want to surround myself with that have the same mentality as me. Continuing the tradition of great Iowa wrestlers and being the best. From the bottom to the top, 125 to heavyweight.”

Warner ended our interview by thanking the many people that got him to this point in his life, “Everybody that has ever been a part of my process. It didn’t start my freshman year, it started when I was six years old. All of my coaches coming up. Especially my parents and my family, they sacrificed a lot for me. I know for a fact I wouldn’t be where I am today without them. Coach (Bryan) Medlin and Coach (Nick) Miller. They are the best high school coaches in the country in my opinion. They would do anything for me and they treat me like I am one of their own. I couldn’t be more blessed to have them by my side.”