The Road to Four-Timer Club 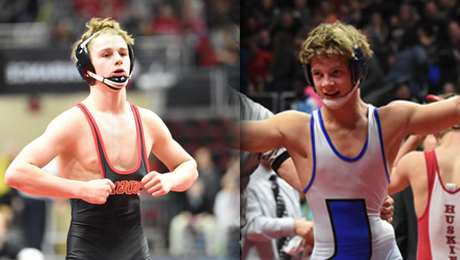 Teske started his quest for four at 106 pounds with a win over returning state champion, Jakob Allison (Waukee) by a 8-4 decision. In 2016, Teske’s road to the finals came by way of fall, major, tech fall with a 9-2 decision in the 113 pound championships over McGwire Midkiff (Council Bluffs-Thomas Jefferson).

Alex Thomsen’s road to two did not come easy. As a freshman Thomsen faced Highland Riverside’s Drew West in the 113 pound quarterfinals. Both wrestlers came into the bout undefeated but it was Thomsen who came out on top with a 5-4 decision. Thomsen would go on to defeat Ben Moyer (Alburnett) by technical fall in the semi-finals and Eric Lentz by a 10-3 decision. His sophomore season saw an early test again. In the first round, No. 1 Thomsen faced No. 3 ranked Wally Zernich of Lisbon. In arguably the most anticipated match of the 2016 tournament, Thomsen delivered defeating Zernich by 4-1 decision. He would go on to tech fall his way to the finals to once again face Drew West. Thomsen left no doubt by winning by major decision 15-7 to claim his second state championship.

Marcus Coleman went 1-2 as freshman but has gone back to back in class 3A. Sophomore year was over Briar Dittmer (Southeast Polk) by a 9-5 decision and a last year he put an exclamation point on his 43-1 season record with a fall over Deion Clayborne (Sioux City-North).

Ryan Leisure of Clear Lake turned heads his freshman year, making the 2A finals at 113 pounds  where he lost by fall to Brock Rathbun (Center Point-Urbana). Leisure took home his first state title at 126 pounds by 6-1 decision over Tristan Clark (PCM, Monroe). Leisure capped off his junior campaign in fashion by pinning Creston/Orient-Macksburg’s Wyatt Thompson.

Creston-Orient Macksburg’s Chase Shiltz enters his senior season holding a 125-6 career record with three trips to the state finals. Shiltz reached the finals his freshman year in dramatic fashion with a 3-1 decision over Independence’s Chase Straw. Shiltz would be the underdog on paper once again heading into the finals against undefeated Zach Skopec. This time he wasn’t able to pull the upset and would lose by decision, 5-2. Shiltz went undefeated in his sophomore season, where he capped off the season with a 11-3 major decision over Zach Johnston (ADM) in the 160 pound 2A state finals. Shiltz became a two-timer with ease in 2016. He went fall, major, tech on his road to the finals where he then majored Nick Holt (Independence), 8-0.

Bryce West has gone back-to-back with undefeated seasons at Highland-Riverside. Bryce and his brother Drew have now moved to Solon, IA making the switch from class 1A to class 2A. West will enter his senior senior with a 153-2 career record with a 109 match win-streak. His last loss was in the 2014 113 pound quarterfinals against Clarion-Goldfield’s Josh Portillo. West went on to place third with four straight falls. Bonus points have been the story for West, posting seven bonus point victories in the last two state championships. He won the 120 pound state title in 2015 with a major decision over Cole Needham (West Marshall), 14-6 and the 2016 120 pound state championships with a 3:26 fall over Southeast Warren’s, Brady Kyner.