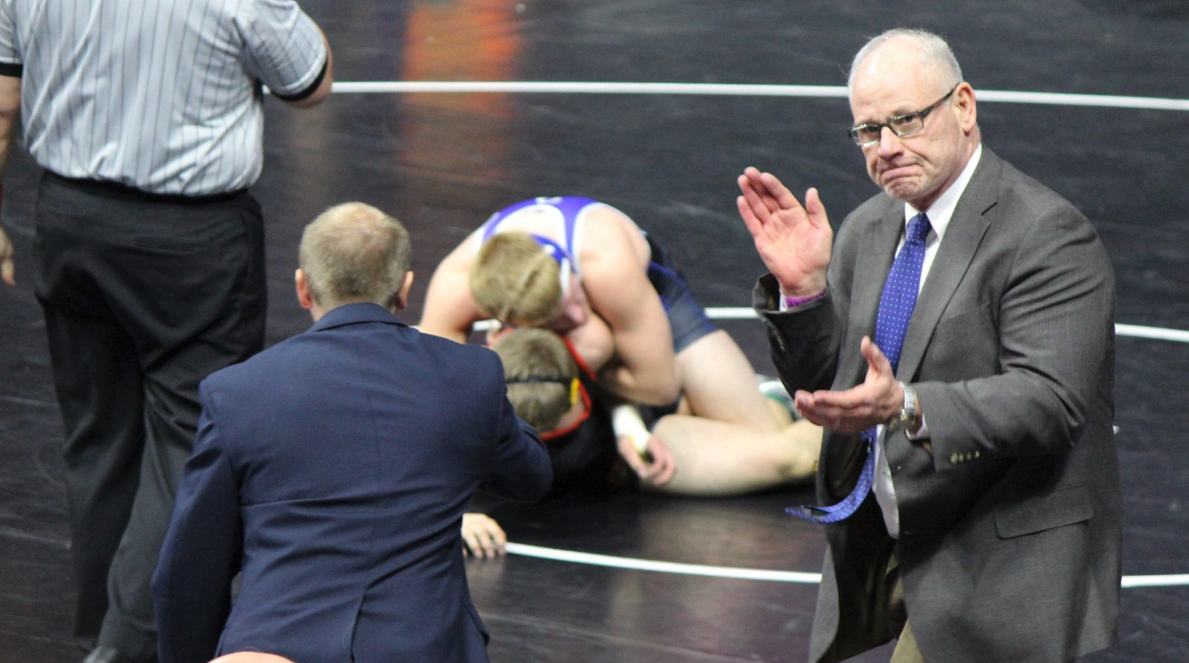 Lifetime Service Honorees below will be honored at 32nd Annual Convention of the Iowa Wrestling Coaches and Officials Association, Saturday, October 29th. Full event schedule can be found HERE.

A native of Greenfield was a standout prep in wrestling and football, earning a fifth place medal in the 1974 State Meet and helping his school to a third place finish. The next year while attending Ellsworth Community College in Iowa Falls, he was back on the mat, officiating junior high matches.

He returned home in 1976 as a third generation auctioneer and for the past 29 years has been a sales manager for Schildberg Construction Company. That’s the day job, but on nights and weekends he built a reputation as one
of the state’s best on the whistle. Earning the respect of coaches and the Iowa High School Athletic Association he worked numerous sectional, district, and regional traditional and dual team tournaments as well as the prestigious are invitational. His 30 appearances in the traditional tournament ties for second most all-time, one behind his partner Jim Christensen. He also worked 16 Iowa State Dual Team Tournaments.

He is a Past President and Officer of the Iowa Wrestling Coaches and Officials Association and a convention committee member. He is a district representative on rules and an IHSAA rules clinician. Professionally he tirelessly works to promote the sport by volunteering at youth tournaments and working at recruiting new and young officials.

He and his wife Joni raised three sons, Austin, Jared, and Kolby. Each wrestled and Austin now works as an official in the Kansas City area. The three combined for five state appearances, including a runner-up and championship finish by Austin in 2004 and 2005.
Dan Cummings

Last winter’s traditional state tournament marked the close of an historic chapter for Mediapolis’ Dan Cummings. Fittingly it came with an Iowa High School Athletic Association Hall of Fame induction. A native of Le Roy, Minnesota, he finished fourth in the State Tournament in 1969 and followed that with a varsity career at Mankato State University, while earning a high school teaching and coaching degree.

He built a glittering 38-year dominating reign as head coach at Mediapolis after serving as an assistant two years. His teams were perennial champions in the Southeast Iowa Conference as they annually swelled his career dual meet record to 477-172-3, which is fourth best all-time in Iowa and among the top 15 nationally. He has coached 125 state qualifiers of which 62 were medal winners including nine champions and seven who earned runner-up honors. He also developed 31 wrestlers who ended their careers with 100 or wins, with 10 exceeding 150 victories. At the traditional State Tournament his team finished in the top 10 eight times including third in 2013, second in 2014 and champions in 2015. His team also qualified for the State Dual Team Tournament five times with third place efforts in 2013 and 2015 and second in 2014.

Mr. Cummings retired after teaching 32 years but he continued to coach the sport he loved. He and his wife Debra raised three sons, each a three-time state meet qualifier and who combined for a 385-50 prep record. Jamey was a third and fourth place medalist before wrestling for the U.S. Naval Academy. Ryan was the 1992 and 1993 State Champion and wrestled at the University of Northern Iowa. Brandon was a 1996 third place medalist.

A Wahlert Catholic graduate, Mr. Danner went on to receive his degree from Northwest Missouri State University before earning his Master’s degree from Loras College in Secondary School Administration.

As a prep, he earned a Wahlert’s first ever State Championship in 1971 at 98 lbs. It was the first featured match of the first ever television production of the State Tournament.  He enjoyed a successful career in education and coaching spanning nearly 40 years. He began at Newman Catholic before moving on to Epworth, Western Dubuque and then Wahlert Catholic, where he retired in 2011. He worked 30 years as an assistant wrestling coach at Wahlert before taking over the program in 2005.

As a head coach his teams posted a 150-47 record with 23 State Qualifiers, 12 of which won medal honors. He developed two state champions and three wrestlers who went on to star at the NCAA Division III level. A four-time District Coach of the Year, he was honored by his peers when he and staff were named Iowa Coaches-of-the-Year in 2011.

He and his wife Mary Jo raised three children, Sarah, Katie and Drew. Sarah teaches at North Scott, Eldridge and Katie teaches at Central, DeWitt. Drew is pursuing a nursing degree at Kirkwood.

A 1956 graduate of Fort Dodge High School, Mr. Friederichs has a varied litany of achievements in his chosen sport. He was a three-time State Tournament qualifier at 95 lbs. and was the meet’s runner-up in 1955. At Iowa State University he lettered three years, placing third in the NCAA Tournament as a junior before injuries forced him to pass up his senior season.

Following graduation from Iowa State in 1961, he taught and coached in Fort Dodge for 35 years, coaching junior high wrestling six years, an assistant for one season at St. Edmond High School while earning his MS degree from Bemidji State. He later earned his Secondary and Junior College Administrative Certification from Iowa State University.

For 24 seasons he was the head coach at Iowa Central Community College before retiring in 1995 with a dual meet record of 240-80-2. He coached ICCC to the National Championship in 1981 and also directed the Tritons to second and third place efforts twice. He coached 54 All Americans and nine national champions at ICCC.

During his career he was twice named the NJCAA Coach of the Year (1981 and 1995). He was a 1985 honoree of the NJCAA with induction into their Wrestling Hall of Fame. In 1993 he won the prestigious NJCAA Man of the Year honor for being supportive of the sport outside the college program.

In addition, Mr. Friederichs has been inducted into the IHSAA Wrestling Hall of Fame, the Dodger Hall of Fame and the Triton Hall of Fame. He has also been active as a radio color analyst.
Brian Reimers

A graduate of Humboldt High School, he went on to wrestle two seasons at Iowa Central Community College in Fort Dodge and qualified for the NJCAA Tournament as a freshman. He finished his undergraduate degree at Northwest Missouri State University in 1977 after qualifying for the NCAA Division II National Tournament.

He started as an assistant coach at Riceville High School, 1977-79 before moving to Ogden where he started the wrestling program and served as their only head wrestling coach until his 2016 retirement. He has been a teacher, an athletic administrator and assistant coach in other sports at Ogden, but his tenure in wrestling was glittering.

Coach Reimers authored a career dual meet record of 353-206-6 with his teams winning 20 Invitational titles, six conference championships and one District title. At the traditional State Meet his teams had four top ten finishes with a best of sixth place. He mentored 85 State Qualifiers with 35 being in the medal ceremonies. He was the first Iowa coach ever to mentor two four-time state champions. An avid disciple of fundamentals. He coached 9 gold medalists and seven others who won silver along with four who took third and two that finished fifth.

He was named 2016 Class 1A Coach-of-the-Year. In 2014 he was chosen as the National Federation of High School Coaches as their Wrestling Coach of the Year. Throughout his career he is known for his dedication to the IWCOA with extensive service on the convention committee. He is also a member of the IHSAA Wrestling Hall of Fame committee.

Brian and his late wife Marci had two sons, Luke who is married and works for Wells Fargo in Des Moines, he and his wife Kara have with two children, Ella and Cael; and Seth and his wife Nancy who live in San Diego CA. After their military service in the Army, he is a Wildlife Biologist and has his own company.  They have two children Isabel and Mathew.  Brian is now married to Michelle and she has two sons Benjamin and Ty.