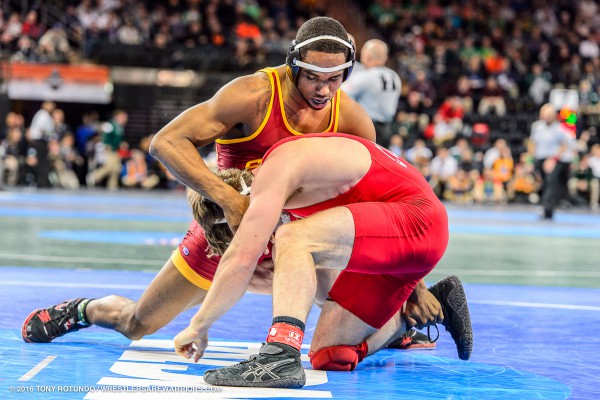 As we head into the 2016-17 season it looks like the Iowa State Cyclones will lean heavily on their senior class with as many as five starters coming out of this senior group. Not only are all of the wrestlers in their senior season, but most of them are also multi-year starters, which brings a lot of experience to the table for head coach Kevin Jackson.

The Cyclones look to return all three of their 2016 NCAA All-Americans, with former NJCAA champion Patrick Downey making his way down to 184 pounds as opposed to 197 where he spent last season. Iowa State also got a huge gift from the NCAA this summer, when we learned that senior Earl Hall would be granted another year of eligibility, giving this team a proven, lightweight anchor.

Here is how the Cyclone lineup looks to shake out:

For the first time in a long while, Iowa State looks to have more than one solid option at 125, which means senior Kyle Larson will be pushed to keep his starting spot. Larson is a solid, savvy veteran who has been the post-season starter for each of the last two seasons for Iowa State. In terms of upside freshman Markus Simmons probably brings the most to the table, though it should be mentioned that his competition weight hasn’t been this low since his junior high school season. Purdue transfer Jon Marmolejo should provide depth at the very least and look to challenge.

We know that the Cyclones will have an All-American contender in Earl Hall at 133, but the return has made Nathan Boston’s bump to the 141 spot in the Iowa State lineup a little more permanent than originally planned. Boston struggled to hold 125 last season for Iowa State and went up two weight-classes in season to 141. It remains to be seen what type of results we can expect from Boston at 141, but now that he has spent the last nine months growing into this weight he should be much better adjusted in terms of size this season.

Gabe Moreno is the leader at arguably the Cyclones deepest weight class as former top recruit John Meeks as well as Dante Rodriguez look to be the backup at this weight. There are some rumblings that an injury will force Rodriguez to redshirt this season which may benefit the Cyclones down the road. Moreno is coming back from shoulder surgery which caused him to miss most of 2015-16, but he was a top 20 wrestler when healthy.

The hardest two weights to figure out for Iowa State will be the middle two, where it seems that there are a slew of wrestlers all vying for a spot. For now it looks like sophomore Renaldo Rodriguez-Spencer will be the early leader at 157 after trading starts with Logan Breitenbach for most of last season. Breitenbach is reportedly moving up to 165 where he will challenge freshman Colston DiBlasi who is coming off a solid true freshman season. The above is what has been relayed to us as the preseason plan for the wrestlers.

With that said, while it was a bit of an extra cut, it would not be too far out there to consider that Breitenbach could try and challenge at 157 if he can’t win the spot at 165 pounds. Additionally freshman Chase Straw is slated to wrestle at 149 this season, but last season we saw him up at 157 and 165 pounds, so it’s also not unreasonable to see him challenge at 157. As you can see there could wind up being a lot of moving parts, but expect the above to be the early leaders.

From there we get back to the established talent, where All-American Lelund Weatherspoon will be back for his final go ‘round at 174. Weatherspoon has been an under the radar type for Iowa State in his first three seasons, but he put everyone on notice at NCAAs with his run to the semifinals. We will see how Weatherspoon will handle the target on his back.

Despite the Cyclones returning NCAA qualifier Dane Pestano, it appears All-American Patrick Downey will cut down to 184 this season to wrestle this weight for Iowa State. That move will prompt Pestano to attempt to change weights, with the rumor floating that he will attempt to get as low as 165 (further muddling that weight battle), but at the very least the Cyclones will have a strong backup. Downey did a majority of his work up at 197, most of the time weighing in well under the maximum allowed. After seeing what an undersized Downey was able to do up a weight, this should be an upgrade from last year for Iowa State, though nationally this weights is one of the deepest.

The Downey cut allows sophomore Marcus Harrington to re-enter the lineup at his natural weight for Iowa State. Fans were expecting big things from the former high school national champion, but Harrington took some lumps last season, which is part of the reason Jackson put Downey in at 197. Harrington looked good this summer out a University Freestyle Nationals only taking losses to Greco standout Kevin Beazly and Virginia Tech All-American Jared Haught. He will also start the season in Flowrestling’s preseason top 20.

The final weight we are opening the door on a little speculation based off of talent. Quean Smith has made numerous starts over the past three years for Iowa State, and despite being the best option in the room, he hasn’t done much to leave an impression on the field nationally. That’s we believe that true freshman Gannon Gremmel will get a serious look this season to compete right away for the Cyclones. Gremmel comes in with loads of talent, having won a Cadet and Junior freestyle national title over the last three years.

At the end of last year Smith was dealing with some injuries, which depending on how lasting they are could open the door for Gremmel. While we expect Gremmel to challenge for the spot, there is the possibility that the start of his season will be delayed, which will in turn slightly delay his shot to win the job in the early season. If Smith runs into injuries again this season, Gremmel appears to be the logical choice to step in and man the spot.