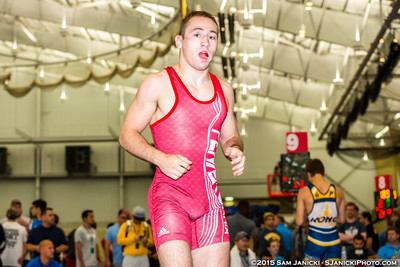 Many of the countries best high school wrestlers gathered in Bethlehem, PA today to compete in the Who’s #1 dual hosted by Flo Wrestling. The event didn’t disappoint and there was a lot of great action and great matches. There were also a few matches featuring wrestlers with Iowa ties.

Iowa Hawkeye commit and #1 ranked wrestler Gavin Teasdale of PA dropped a tight 8-7 decision to #2 Jordan Decatur of OH in the first match of the night. Teasdale got down big in the first period before fighting back with a barrage of attacks and a big inside trip. In the end it wasn’t quite enough as Decatur held on for the 1 point victory.

Iowa State had a couple of committed wrestlers in the event that both wrestled very well. #4 Jarod Verkleeren from PA excited Cyclone nation with a huge 10-3 win over #2 ranked Kaden Gfeller of OK in the 2nd match of the dual. Verkleeren kept the pressure on throughout the match and was just too much for Gfeller. The 2nd Cyclone commit of the afternoon was #2 ranked Austin Gomez of IL who dropped a hard fought 8-2 decision to #1 Daton Fix of OK. Don’t let that score fool you though as this was a 3-2 match right to the end when Gomez tried a last ditch move that put him on his back for 5 points. Gomez was able to get on Fix legs numerous times but just wasn’t able to finish.

The final match of the dual was a senior level match featured as the main event that was wrestled under freestyle rules. 2015 NCAA champion Cody Brewer, who now trains in Evanston, IL at Northwestern University, took on former Iowa Hawkeye and 2014 NCAA champion Tony Ramos. Brewer has always been known for his offensive attacks and he did not disappoint in this event as he picked Ramos apart from neutral and dominated his way to a 12-0 Technical Fall. Ramos is a 2x world team member and many thought was one of the favorites to win the special wrestle off coming up at 61kg. He still may be but Brewer has cemented himself into that discussion as well.