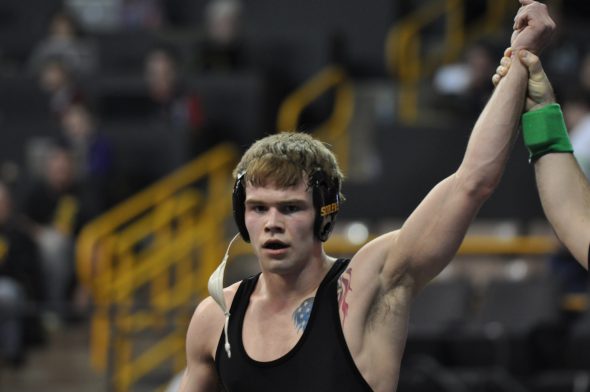 Wrestling media site Flowrestling continues to unveil their preseason college rankings with the 149-pound rankings released today. It comes of no surprise that Hawkeye wrestler Brandon Sorensen will start the season ranked No. 2 after finishing runner-up at last March’s NCAA championships.

Soresnen is ranked behind Big Ten foe Zain Retherford of Penn State, who was the only wrestler to hand Sorensen a loss last season. In addition to Retherford the Big Ten also boasts Michigan’s Alec Pantaelo (No. 5), Ohio State’s Micah Jordan (No. 6), Rutgers’s Ken Theobold (No. 13), and Maryland’s Shyheim Brown (No. 19).

Iowa State gets their second preseason ranking with senior Gabe Moreno returning to the lineup after suffering a shoulder injury last season. Moreno is ranked No. 17 and is joined by Big 12 ranked wrestlers Anthony Collica of Oklahoma State (No. 4) and Davion Jefferies of Oklahoma (No. 12) in the rankings.

Northern Iowa redshirt freshman Max Thomsen makes his debut in Flo’s rankings as well, after a strong redshirt season, at No. 20. Thomsen was the top rated prep in Doug Schwab’s 2015 recruiting class, and he will be tested early with Virginia Tech headed to the West Gym in early November. Also ranked from the MAC Missouri’s Lavion Mayes (No. 3), Central Michigan’s Justin Oliver (No. 8), and Northern Illinois’s Steve Bleise (No. 15).

One thought on “Brandon Sorensen starts season ranked No. 2”