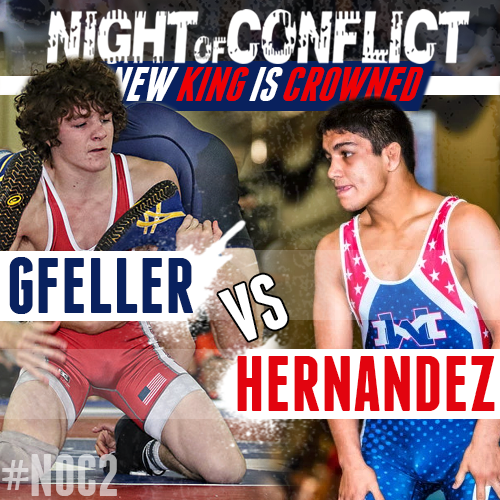 Last week we announced one of the biggest head-to-head meetings in event history with Cohlton Schultz of Colorado taking on Jared Campbell of Ohio. Today we announce another top five ranked head-to-head battle as Oklahoma’s #3 Kaden Gfeller will face #5 Jaime Hernandez of Illinois.

Hailing from Heritage Hall, Gfeller has placed at just about every major tournament the sport has to offer. In addition to being a three-time state champion, Gfeller has also boasts Super 32 middle school, Fargo freestyle, and FloNationals tournament titles and has placed at other major tournaments such as UWW Cadets, Fargo Juniors, Super 32, and Freakshow. All of those accolades has led to the Oklahoman being ranked the #9 overall recruit in the 2017 class.

ANNOUCED MATCHUPS FOR NIGHT OF CONFLICT:

Your tickets will be scanned for entry and no reentry will be allowed. Each individual will need to print their ticket. *You can purchase as many as you like but make sure you print each ticket for entry*

*Wrestling lineup is subject to change*

ABOUT NIGHT OF CONFLICT:

The IA Wrestle Team is proud to announce that this October we will be hosting a premier wrestling event titled “The Night of Conflict 2”, and will pit some of the best talent that the country has to offer in a head-to-head battle for supremacy of each weight class. The event is scheduled for October 14, 2016 in Carver-Hawkeye Arena and it will take place the day before the preseason tournament, the Conflict at Carver, whose proceeds directly benefit the Hawkeye Wrestling Club. The dual will be broadcasted on FloWrestling.