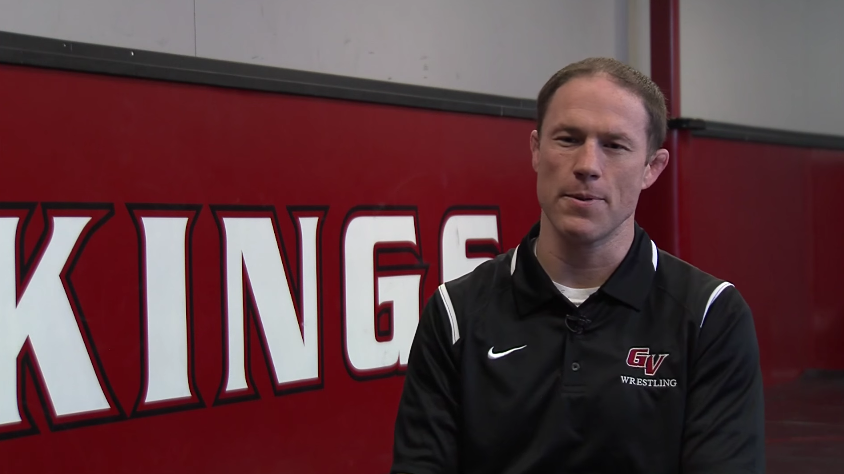 Grand View Athletics
Grand View University head wrestling coach Nick Mitchell, who has led his team to five consecutive national championships, has been selected for the 2016 Distinguished Service Award (DSA) from the United States Sports Academy.
Mitchell started the first-ever wrestling team at Grand View University in Des Moines, Iowa, with the 2008-09 season and in eight years the Vikings have become a perennial wrestling power.  This year, Grand View won the National Association of Intercollegiate Athletics (NAIA) National Championship for the fifth straight year, the first NAIA team ever to do so.
These accomplishments earned Mitchell the NAIA National Coach of the Year honors in 2012, 2014, 2015 and 2016, in addition to being named Regional Coach of the Year six times. He has coached 60 All-Americans and 13 NAIA individual national champions.  His team has won its regional championship for six years in a row and has finished in the NAIA top 10 for eight straight years.    The team has an 88-9 record in dual meets over 8 seasons.
“We want to continue to strive to be the best in the nation year after year,” Mitchell said.  “To do this it takes a total team effort. Every guy on the team needs to be committed to living a championship lifestyle and doing more than everyone else in the nation.”
Before coming to Grand View, Mitchell was an assistant coach at Wartburg College in Waverly, Iowa, for eight years.  Four of those teams won national titles and 62 athletes achieved All-American status.
Mitchell, who resides in Ankeny, Iowa, wrestled his college career at Wartburg, where he was a three-time Iowa Conference champion and three-time National Collegiate Athletic Association (NCAA) Division III All-American. Individually, he finished second at the national championships once and was third twice. He was a part of Wartburg’s 1999 national championship team. Mitchell was team captain for the Knights and was named the team’s Outstanding Wrestler twice. He compiled 114 wins as a Knight and is a member of the Wartburg College Athletic Hall of Fame.  He earned his bachelor’s degree in education from Wartburg in 2000.
Each year the United States Sports Academy, based in Daphne, Ala., presents its Distinguished Service Award to individuals who have made outstanding contributions to national or international sports through instruction, research or service.  Those selected must possess an extensive background in sports. This means that the individual must have had significant dealings in either instruction, research or service in sports for more than 10 years. The award is part of the Academy’s Awards of Sport, which each year honor a wide range of accomplishments in sport and serve as “A Tribute to the Artist and the Athlete,” in conjunction with the Academy’s American Sport Art Museum and Archives (ASAMA).
(Cover photo Doug Wells)