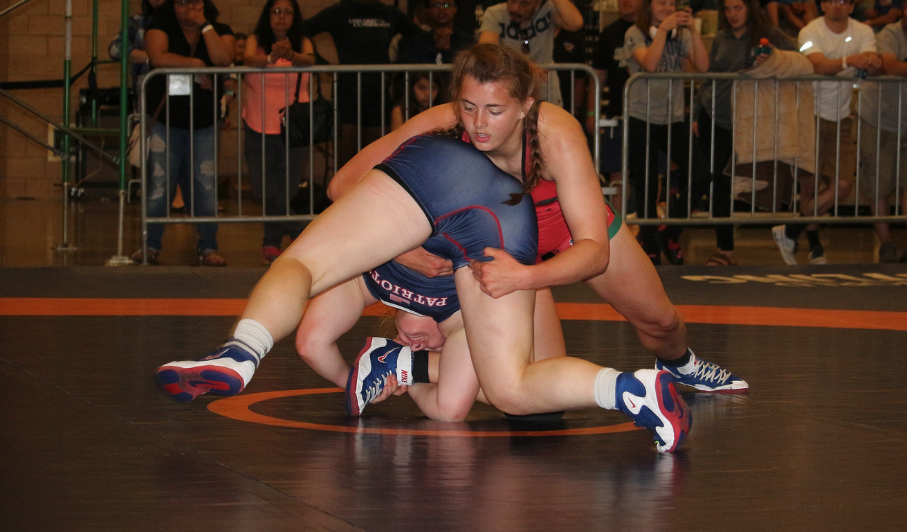 UWW Cadets (born 1999-2001) hit the mats on Saturday. Of the six females competing from Iowa, five of them competed at the Cadet level.

Courtney Six a freshman from Fort Madison went 1-2 for the day competing up a weight in her first national Freestyle event. Six received a bye in round one followed by a loss by fall to Peyton Prussin of Nevada. In the consolation bracket, Six received a bye followed by a pin over Larissa Flores of Texas. Six’s final match was a loss by fall to Alina Collins of Washington which put her out of the tournament.

Tateum Park of Davenport was a runner-up in the 113 pound Schoolgirl division last year and moved into the Cadet division this year as an 8th grader. Park received a bye in round one followed by a 12-2 tech fall win over D’shaylyn August of Texas. In her next round, Park lost a 2-8 decision to Carly Valleroy of Missouri. On the consolation side, Park picked up an impressive 17 second pin over Natalie Rodriguez of Texas and a 10-0 tech fall over Alina Collins of Washington. In her final match, Park lost by 0-10 tech fall to Kyleigh Lopez of Oregon to finish one win shy of reaching All-American status.

Alanah Vetterick of Norwalk went 1-2 for the day in her national Freestyle debut. Vetterick, a high school sophomore and three-time Folkstyle National runner-up, had Jocelyn Murphy of Illinois in her round one matchup where she lost by fall. On the consolation side, Vetterick received a bye followed by an 8-7 win over Xochitl Mota-pettis of Texas. In her final match, Vetterick lost by fall to Randi Robinson of Illinois.

Nicole Watters, a high school sophomore from Ankeny went 1-2 for the day where she faced #2-seeded Emily Cue of Colorado in the first round and lost by fall. On the consolation side, Watters won by 10-0 tech fall over Ashley Weatherford of Georgia followed by a 0-4 loss to Korinahe Bullock of Illinois to put her out of the tournament.

Ciana Sonberg wins by fall to advance to the 70 kg Cadet finals.

Ciana Sonberg of Charles City also entered the Freestyle arena for the first time and battled her way to a 2nd place finish and U.S. Cadet National Team position. Sonberg, a high school sophomore, is a two-time Cadet Folkstyle National Champion (2014, 2015) and a two-time Junior Folkstyle All-American (2015, 2016). In the championship bracket, Sonberg won by 9-1 decision over #1-seeded Paige Amy of Michigan followed by a 5-4 decision over Korinahe Bullock of Illinois, and a pin over Lena Flanagan of Washington. Sonberg’s only losses came in the best of three finals where she lost by 2-12 tech fall and 0-10 tech fall to #2-seeded Emily Cue of Colorado.

As a member of the U.S. Cadet National Team, Sonberg qualifies to compete in the Pan-American Cadet Championships in Lima, Peru, July 1-3.

Watters started the tournament with a 10-2 win over Nicole Diaz of California followed by a first period pin over Lauren Seqovia of Texas. In her next two matches, Watters picked up a pair of tech falls over Kaitlyn Hill of Michigan (10-0) and Andrea Sennett of Illinois (14-4). In the best of three finals, Watters won by 10-0 tech fall and 7-0 decision over Hannah Gladden a 2013 Cadet Pan American Gold Medalist from Alabama to defend her 72kg position on the UWW Junior World Team.

We will continue to bring you updates on your Iowa Women Wrestlers as they compete in Spain, Fargo, Peru, and France this summer!