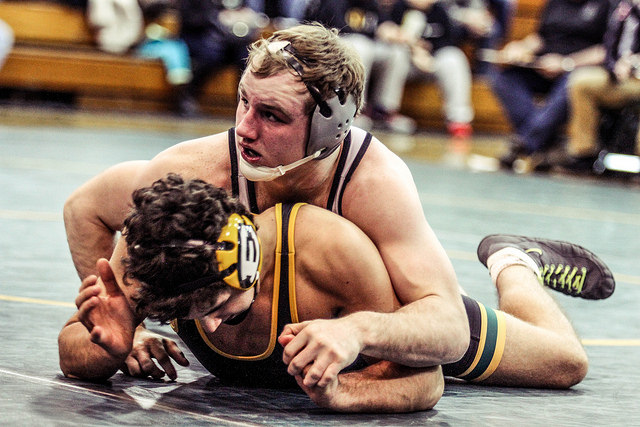 Every year Earl Smith of D1 College Wrestling releases his class rankings, which are the longest running free class rankings that are available. This year’s class of Iowa seniors features seven wrestlers featured in the top 150, and each Iowa and Iowa State will be adding five top 150 seniors from across the nation.

Industry consensus agrees that the Iowa Carter-duo, Carter Happel of Lisbon and Carter Isley of Albia, are top 50 wrestlers for their grade. In D1CW’s rankings we surprisingly find Happel in the top 20, at #19, which is the highest by any ranking service in the nation. This is not to say D1 has Happel over-ranked by any stretch, but for reference Happel is ranked in the mid-30’s by both Flo and InterMat. Happel will be headed to the University of Iowa for college and projects at 141.

The other Carter, Carter Isley, comes in at #45 in these rankings. Again D1CW’s rankings have Isley a little higher ranked than either Flo or InterMat, but prior to his All-Star loss to Gannon Gremmel last month Isley was a mainstay in the top 50. The UNI bound heavyweight has also reached the finals of FloNationals and USA Wrestling’s Folk nationals this off-season.

Rounding out the top 100 for Iowa seniors is #79 Colton Clingenpeel of Council-Bluffs Thomas Jefferson, #84 Gannon Gremmel of Dubuque Hempstead, #89 Ethan Andersen of Southeast Polk, and #93 Jack Wagner of Bettendorf. All four will be heading off to major Division I programs this fall, with Gremmel (285) and Wagner (125) staying instate at Iowa State and Iowa respectively. Clingenpeel (157/165) will head to North Dakota State and Andersen (285) is off to Oklahoma State.

The final Iowan in the top 150 is three-time state champion Brock Rathbun out of Center Point, and he is ranked #115. Rathbun will join Happel and Wagner at Iowa and projects to slot between the two at 133 pounds.

Cyclone head coach Kevin Jackson landed a massive haul this past year and headlining his group is the #11 ranked Sammy Colbray (197) of Oregon. Jackson also landed top 100 commitments from #35 Kanen Storr (141) of Michigan, #80 Ian Parker (133) of Michigan, and #83 Trey Meyer (165) Washington. The Michigan pair of Storr and Parker have been fairly active since the end of the high school season with Storr taking runner-up honors at FloNationals and winning the NHSCA folkstyle nationals, and Parker being named USA Wrestling’s athlete of the week after his Journeyman performance.

One of the bigger surprises in D1CW’s rankings is future Hawkeye wrestler Alex Marinelli showing up in the #2 spot, behind Penn State phenom Mark Hall. Marinelli isn’t lacking in credentials, but this is the first time we have seen the Ohio wrestler ahead of New Jersey prep Nick Suriano, who is ranked second by most. Marinelli comes in a potential 165-pound starter for Iowa from Day 1.

Joining Marinelli in the Iowa class is #25 Kaleb Young of Pennsylvania, who has put together a strong senior season that started with him winning a Super 32 title and now his first high school state title. Young projects at 165 or 174-pounds.

Joining Isley in the UNI recruiting class is lightweight Rudy Yates of Illinois, who is ranked #22. Last year Schwab put together a top four recruiting class at UNI and while this class may not have the depth his 2015 class had, it certainly still features plenty of star power in these two wrestlers. Yates will either wrestle 125 or 133 at UNI.

Recruits that will wrestle in Iowa, but not from Iowa